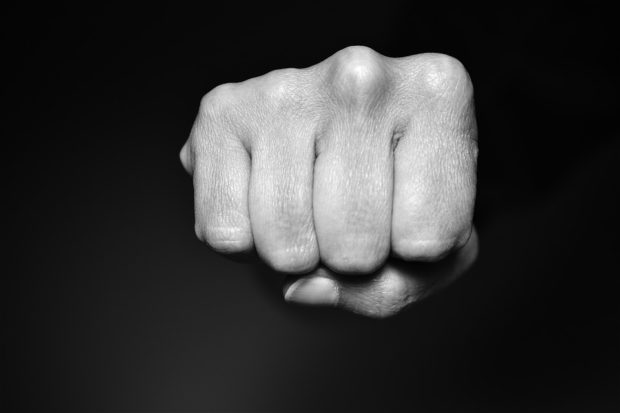 I often write about my encounters with CCW licensees at work.  I’m regularly disappointed at how few CCW licensees are actually carrying their guns when I have contact with them.

I encountered a CCW carrier last week.  The scenario was a bit different from my normal pattern of encounter.  This time he WAS carrying and had to display the gun to avoid being attacked.

Despite what you may read on the internet, you will not always get arrested if you display a gun.  The CCW carrier didn’t make perfect decisions here, but he did enough correctly to be listed at the “victim” on my report rather than the “suspect.”

The case is closed, so I am not revealing details of any ongoing investigation.  The same details I relate here are plainly described as a public record in the police report I generated.  I will, however, write in generic terms to preserve the identities of the victim and the uncharged suspect.  I will also attempt to provide you with some globally applicable “best practices” should you get involved in a similar situation.

Here’s what happened according to the victim.  Despite our efforts to make contact with the suspect, he never provided a statement so keep in mind that we don’t know his side of the story.

A fast food delivery driver (the victim) got in a verbal argument with his female boss about his work schedule.  The boss got mad and called her husband.

Her husband (the suspect) showed up at the store and began threatening the delivery driver.  He threatened to “beat (the driver’s) ass” and “drag him outside and whoop his ass.”  The verbal tirade went on for several minutes.

The suspect then threatened to get the driver’s address from his employment applications and “visit him at home.”  At that point the driver called the police.

He was on the phone with 911 as the enraged suspect started moving towards him with his hands up in a fighting stance.  The suspect was 50 pounds heavier than the 23-year old delivery driver.   The driver also knew that the man had a felony arrest record had served time in prison.

The driver physically backed up as far as he could in the restaurant.  As the enraged husband got within arms’ reach, the delivery driver, raised the front of his shirt to display the S&W M&P Compact he was carrying in an appendix holster inside his waistband.  The driver put his hand on the gun’s grip, but did not draw the weapon. 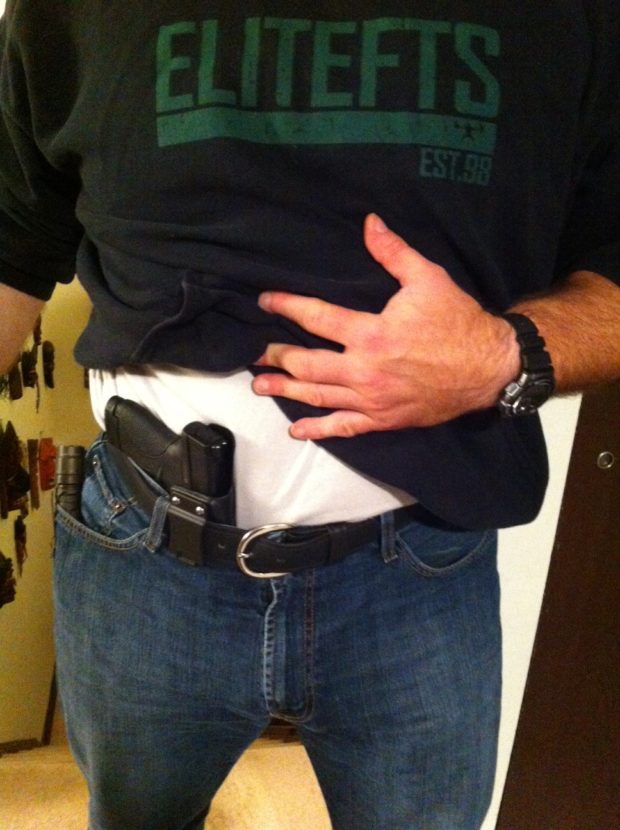 Similar to this victim’s firearm display

At the display of the weapon, the suspect backed off and began walking to his car.  The driver believed that the suspect was going to his car to get a gun of his own.  While still on the phone with 911, the driver then ran out the restaurant’s back door and met us a couple doors down out of sight of the suspect.

He informed the dispatcher that he was armed, had a CCW license, and had displayed the weapon.  The dispatchers relayed all that information to me and the other officer who responded.

When I arrived on scene, he had his CCW license ready for me.  He told me where and what he was carrying.  I instructed him to keep his hands away from the pistol.

I did not disarm him.  I did not take him into custody or handcuff him.  He told me his story (which seemed reasonable) and we attempted to locate the store manager and the suspect.  They had fled the scene.  Other employees at the store verified the driver’s story.

I took the driver back to the store and waited with him inside as he gathered his belongings and tendered his resignation.

The driver decided that he didn’t want to file charges against the suspect.  He did not want to have to appear in court and be in contact with the man at any time in the future.  I took a report so that if he changes his mind, we can charge the suspect with “aggravated menacing.”  I re-confirmed with the victim yesterday that he did not want to file charges and currently the case is closed.

Some things I think  worked in the driver’s favor:

– He called 911 WHILE the incident was escalating.  The dispatchers could hear the man yelling at him. Getting on the record as the “victim” will alter how the officers respond to the situation.

– He retreated as far as physically possible before displaying the weapon.  In Ohio, there is a duty to retreat where reasonable before using force in self defense.

– There was an obvious size disparity between the two parties.

– He escaped at the first possibility without trying to apprehend the suspect, hold him at gunpoint, or continue to display the weapon.

-He gave me a reasonable verbal statement at the scene.  He clearly articulated the suspect’s actions and his response to those actions.  This column is not legal advice, but I remain a vocal opponent of the “don’t say anything” school of thought with regards to talking to the police.

What if the suspect called the cops instead?  If he claimed: “I was minding my own business and that dude pulled a gun on me.  It was a black semi-automatic pistol and he’s carrying it in his front waistband.”

How would that turn out if the true victim here didn’t provide his side of the story and identify potential witnesses and alternate sources of evidence (the video)?  If the dude had clammed up, he might have been arrested when we found he had a gun identical to the one that our caller said was used against him.

I recognize that you can certainly run your mouth and say too much to the responding cops.  You are treading a fine line between giving too much info and not giving enough.  With that said, I don’t think you will ever be wrong to tell the officer how you were attacked or threatened (the elements of the criminal offense we need to make an arrest), and to identify any witnesses or potential evidence that could be used in your favor.

The victim in this case probably could have done a few things a bit better.  I’ll discuss those items in a minute.  Before we go there, we must acknowledge the reality of the situation.  There are very few people who act perfectly when they are under the stress of an incident that might lead to their death or serious injury.

As cops (and as jurors) we need to cut people a bit of slack given the trying circumstances involved.  I’ve spent my entire police career investigating calls where force was used or threatened.  I’ve also run force on force training classes for armed citizens and cops for more than 20 years.  I can tell you with some certainty that in almost every scenario, the participants could have done something better to improve their tactical or legal position.

No one is perfect.  There often isn’t a “bright line moment” where previously force hadn’t been justified and suddenly it becomes justified.  These responses exist on a spectrum.  Participants in the confrontation seldom hit that “perfect moment” to draw the gun or to use the physical force.  In reality, they either act too soon (leading to criminal and civil charges) or act too late (leading to their own injury or death).

In this case, the victim may have acted a touch too soon.  The suspect was certainly a threatening presence, but he never once actually touched the victim during the incident.  One could argue that without some physical force being demonstrably used, displaying the firearm may not be the most appropriate response in this situation.

In his defense, he was being chased around the store by a guy 50 pounds heavier who had a prison record.  The dude was threatening to beat his ass and his body language was consistent with his verbalization.  I could see how someone could believe they were at risk of serious physical harm in that situation.

No less lethal.  While the use of a gun may or may not be reasonable in a physical encounter, the use of pepper spray could easily have been justified.  If he had pepper-sprayed the man during his advance, it would most certainly would have been deemed reasonable and he might not have needed to display the gun.  Pepper spray is a really good answer for a lot of physical confrontations.

Why hang around?  Our guy could have just bolted out the back door as soon as the confrontation began.  That might have been the safest solution.  I think our victim here was kind of overwhelmed that the guy’s verbal attack lasted as long as it did.  He was at work and being paid, so that might have affected his decision to stay around longer than necessary as well.

You don’t have to stay around when someone threatens you or hurls non-stop verbal abuse in your direction.  As soon as that nonsense get started, find an exit and get out.  “Losing face” is a much better option than losing money and freedom if charges are filed against you in an incident you could have just walked away from.

As I was speaking to the victim, he told me that the only training he had taken was a basic NRA pistol course in order to get his CCW license.

He told me: “As I went to draw my gun, I thought ‘I should have taken more training.'”

That’s not the thought I want to have when a man is potentially trying to beat me to death.  Learn from this scenario.  Take some advanced training classes.  There has never been any time in the history of mankind where such training is more available to the everyday citizen than it is right now.  Take advantage of the massive number of experienced trainers teaching classes that cover armed problem solving skills.

The first time you experience a scenario like this should be in a training class, not on the street.

Everything turned out OK for our CCW carrier in this incident.  It’s up to you to insure that any incidents in which you are involved have a favorable outcome as well.

As always, the opinions in this article and on this website in general are my own.  They do not represent the views of any other police officers, any police legal advisors, or the agency for which I work.  The comments I make are both general and editorial in nature.  Nothing in this article should be construed as legal advice.