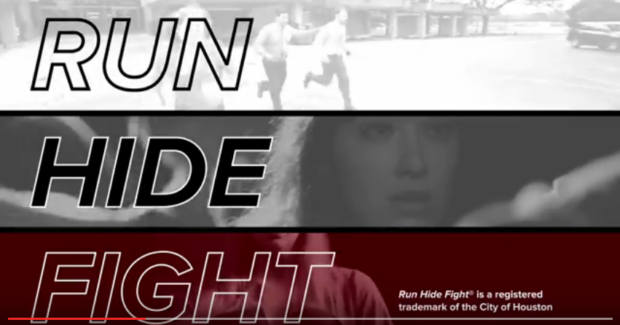 After today’s terrorist knife attack on the campus of The Ohio State University, I’m reposting this article.  Initially believing that the terrorist was armed with a gun, university officials sent warnings to students urging them to “Run, Hide, Fight.”  Surprisingly to me, several students responded to the warnings by asking “What does that mean?”  Here is a quick guide about which response option you should consider in the wake of a terrorist attack.

If you want some additional ideas on how to fight a terrorist when you are unarmed, check out my article “Naked and Afraid:Fighting an Active Killer When you are Unarmed”“

Last week, the Ohio State University Police Department put out a video titled “Surviving an Active Shooter.”  The crux of the message in the video is that the best chance for surviving an active shooter is to follow the hierarchical advice of running as a first choice, hiding as a second choice, and fighting as a last resort option.  Take a look at the video embedded below:

The video isn’t bad and it contains some very good advice.  I work regularly with the police officers at The Ohio State University and have found them to be a professional and capable crew.  They seem to be trying to teach a large number of people some simple rules of thumb to survive an active killer attack.  That’s an admirable goal.  Most of the information in the video is perfectly fine.  My problem with it is that in their quest to “dumb down” tactics so that the majority of the population can understand and remember them, some essential nuance remains unexplored.  “Run, Hide, Fight” might be appropriate for many situations, but it clearly ISN’T the best plan for many other active shooter events.

The first problem with the video is that it fails to even mention armed resistance as a response option.  Statistically, the absolute best way to survive an active shooter event is not by running, hiding, or fighting with chairs and fire extinguishers.  The best survival results for everyone involved occur when an armed citizen or police officer kills the active shooter.

Active killers have historically stopped their attack as soon as they have been met with EFFECTIVE resistance.  Although many folks have effectively resisted while unarmed, the most effective way to target an armed killer is to use a firearm.  Here is an article that describes numerous incidents when armed citizens have stopped active killers.  Please note that in each of these cases, the armed citizen was not harmed by the killer.  Also, in each example the killer stopped his rampage without shooting another round as soon as he was confronted by the armed citizen.  Having an uninjured citizen responder combined with no further casualties among the killer’s intended victim pool is the best possible outcome during a mass murder event.  That rarely happens unless the courageous resisting citizen is carrying a firearm.

I get it.  The video is produced by a university that happens to be a “gun free zone.”  The chances of students or faculty members being armed are extremely small.  But the reach of the video exceeds university property.  Undoubtedly, many people not affiliated with the university will watch the video.  It is problematic when the “authorities” fail to even mention a potential victim’s BEST course of action.

Besides the issue of not mentioning armed resistance, the “Run, Hide, Fight” model has a few other problems.  Sometimes it works.  Sometimes it doesn’t.  Let’s look at each response option and evaluate its potential strengths and weaknesses:

Run:  The officer in the video makes the statement: “Running away should ALWAYS be your first priority.”  This statement is categorically untrue.  While running often yields excellent results in an active killer event and I recommend it as a general tactic, there are many times when running should not be your first choice.

One prime reason running may be a bad option is the lack of physical conditioning among the “target” population.  With more than half of our citizens overweight or obese, why do we think they can run away from the average college age male (the majority of school shooters are young men)?  Our McDonalds guzzling and flip-flop-wearing population stands little chance against a college aged male in a sprint.

If unarmed, you should think about running as a response if there is a good chance you can get away before the killer sees you.  Here are some situations where you may NOT want to make running your top choice:

If I were in any of the above situations, I would consider another option before I took off running.

Hide:  If running isn’t an option, the video recommends that victims should hide from the killer.  I have very mixed feelings about this advice.  Sometimes hiding is an effective tactic.  Sometimes it fails miserably.  Some examples of failure were the Virginia Tech shooting and the Sandy Hook shooting.  Students tried to hide under desks or in closets in both massacres.  Most of the hiding students were shot down by the killer.  Let’s face it.  There aren’t very many good hiding places in the average school classroom.

Hiding makes good sense only when you have the following conditions:

I would place hiding nearly last on the list of options for the majority of active killer events.  As I stated above, there are rarely suitable hiding locations to be found in the average classroom.

Fight: The video suggested that this option is a “reaction that should only be used as a last resort.”  I vehemently disagree with this statement.  There are many situations where fighting should be your FIRST option.  Researcher and trainer Ron Borsch has been studying active killer incidents for years.  In his research, he has found that in roughly 2/3 of all active killer events that are stopped on scene, an UNARMED citizen stopped the killer.  That citizen stopped the killer by FIGHTING.  Imagine what the fatality statistics would be if all of these fighters chose to run instead.  Fighting is a viable option (and potentially a first choice of action) when:

Proper response tactics for an active killer require an analysis of your own abilities, the environment where the violence is occurring, the presence of help, the response time of the local police, and the killer’s weapons/tactics.  They can’t be codified into a simple “Run, Hide, Fight” playbook.  “Run, Hide, Fight” is certainly a better response option than passively freezing, but anyone who is truly interested in his own safety must ignore this simple, dumbed-down dictum and think for himself.