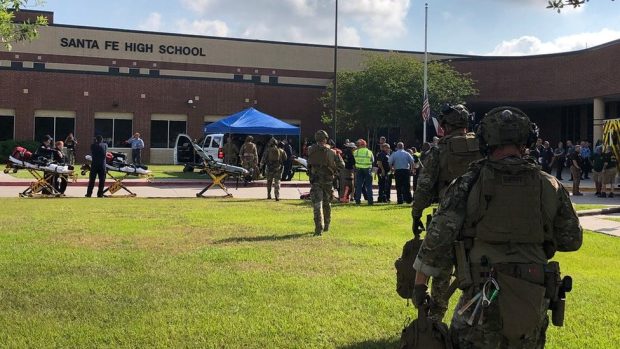 *This is a guest article from a friend and reader who recently took a couple of my courses.  Barry is retired from both the FBI and a job as a police chief.  He managed high threat event security for many years in his FBI position.  He provides some suggestions on best practices for school security.

I personally don’t believe that raising the legal age of firearms purchase to 21 will have any positive effect on school shootings, but I agree with all of his other points.  I think making “red flag laws” more stringent and strengthening background checks might be a promising step assuming that a person is only included in the “red flag” database after due process and a judicial hearing.  I’d also like to see an easy mechanism to get one’s name off of the list if there is a mistake or the person is no longer a threat.

Despite my relatively minor quibbles mentioned above, I think this is sound advice and would be far more successful than banning guns of any type.  We need lots of smart peoples’ input into this problem to create the best outcomes and Barry’s article below is an intelligent contribution.  His contact information appears below the article in the event you would want to contact him.

Monsters will always walk among us.  No one, no testing, no product can delve into the human heart.  In a free society it is too easy and frankly too tempting to always go with an “easy fix.”   To ban a certain firearm might make people feel good but what is next when another type of firearm is used?

The banning of a particular firearm or magazine capacity is meaningless.  The two recent horrific shootings in New York and Texas could have been accomplished just as easily with a 22 rifle, a pistol or a container of gasoline and a match. The children are unarmed and helpless.

The first step is to attempt to identify the seriously mentally ill before an incident occurs.  The second step is to harden the site to deny or delay entry.

After the 911 attack, our Nation took steps to secure our aircraft, our airports and other government facilities against terrorist attacks.  To date we have not had another aircraft used as a weapon against us.  The Israeli government took steps to secure their schools in 1974.  Have any readers seen or heard of a recent successful terrorist attack against the school system in Israel since?

After the January 6 riot at the US Capitol, Congress took immediate action to secure themselves…it seems  money is not an issue when a politician’s security is at stake.

One of the mistakes we are making as a nation is failing to act.  School shootings can be prevented or greatly reduced by undertaking serious security steps.  The threat of violence in our schools, churches and other facilities is real.

Most states have a very slow process to determine the sanity of individuals brought to the attention of authorities.  I believe we need to look at this as well.  Our country has a very poor history in the treatment of mental illness.  We cannot continue to ignore this.  We must face the fact that a population as large as ours have citizens who suffer from this.  A judge should be able to order a mental health exam when evidence of a serious disorder is presented to him or her.   In some cases, I would argue confinement is necessary.

The fault in the federal background system is there is no mental health component to the checks done during a firearms purchase.   There is no requirement for local authorities to place names in the data base after a criminal conviction.  A data base should be created to list patients with severe emotional problems.  If a person has a mental issue that makes him or her a danger to self and others, it may be necessary to force treatment and confinement.  Firearms purchases should be denied to anyone in this category.

I would suggest raising the age for firearm purchase to 21 through a federal law.  This action would deny no one a right. At worst it only delays the right to purchase.

When we conduct an examination in the aftermath of one of these incidents, we find clues to abnormal behavior and dysfunctional families.  Many times, abnormal behavior has been reported and nothing is taken seriously or investigated. This must change.  Parents, friends and teachers must report abnormal behavior and steps should be taken to determine if there is a real threat present.  Police, authorities, school systems and businesses must be held accountable if they take no action after a threat is reported.

Every school in America should be hardened to prevent the type of attacks that occurred in New York and Texas. We were very quick to harden our airports and our aircraft after 911.  Why can’t we embark on a nationwide program to do the same for our schools?  Congress should fund a program for federal grants for hardening schools. There should be widespread congressional support for such a program.

Here are some suggested steps:

Teachers must clearly understand their responsibilities include security and security awareness.  As a police chief I frequently entered schools through unlocked or propped open doors…this must change.

All doors should be controlled by access badges, swipe cards, etc.  First-floor windows should be bullet-resistant glass.

Mantrap entrances should be at every single school as the controlled access point to the school.  A mantrap entrance is a set of secure double doors with bullet resistant glass and high-security locks where you can control the access of a possible suspect.  All entry to the school after the starting bell should be through this portal only.  Certain schools could also utilize metal-detection technology at this access point.

Class- room doors should have secure locks so a teacher can secure the door on the inside to prevent access.  High- security fences should be installed around the school and the playground to prevent and channelize an attacker.  Security cameras should be placed around the outside as well as the inside of any school.

Every school should have armed security personnel present before, during and after school.  I believe these officers should have specialized training beyond the concept of a “school resource officer.”  Retired police officers and certain members of the military could fill this role in the same manner as court room security officers function at our judicial offices country wide.  Why can’t we provide the same level of security to a class room that we afford a judge?

During WW2, this Nation became the “Arsenal of Democracy” in a very short amount of time. President John F. Kennedy challenged us to go to the moon in ten years.  We accomplished his goal in less than ten years.  In less than one year after 911, our government stood up the Department of Homeland Security, the Transportation Safety Authority and took measures to strengthen airport security and harden aircraft doors.

Don’t our students, often called our “most precious resource”, deserve the same level of security as an airport has, a politician or a judge?  I think they do.