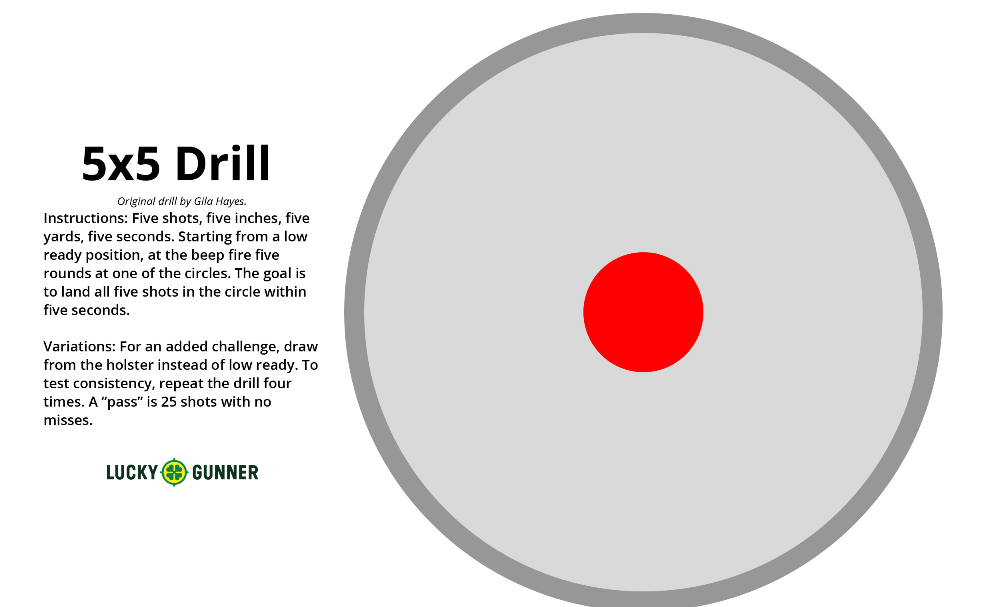 I taught a class last weekend that I don’t often teach. I call it “Tactical Handgun Level 1”. It’s basically the logical next step after a CCW class. It covers fundamental marksmanship, fixing grip and stance issues, drawing from the holster, shooting multiple targets, use of cover, and clearing malfunctions. It’s all the stuff that should be covered in a CCW course, that never seems to actually get covered. It isn’t a popular class for me. I only do it about one a year. Most students think they are too “advanced” to learn things like that.

In any regards, the experience level in the class was minimal. I required a CCW permit as a pre-requisite. Only a few had any formal training beyond their initial CCW. I rarely get to teach beginning shooters like this as I require a higher level of training for a prerequisite for most of my courses.

Remembering a conversation with Claude Werner about the drills he uses with his students, I started the class with Gila Hayes’ 5 x5 Shooting Drill.  The drill is described in Gila’s excellent book Personal Defense for Women.  It isn’t a drill just for women.  It is a drill Gila uses to determine basic competence with a given firearm.  The drill is simple.  Five rounds shot in five seconds from five yards at a five inch circle.  Claude Werner makes his students do the same drill five times to ensure that they aren’t passing with a lucky run.  It’s a good drill.  The folks at Lucky Gunner made up a nice PDF target with instructions you can print out and take to the range.

Claude told me that the majority of his students couldn’t successfully pass the simple drill.  Quite honestly, I didn’t believe him.  I think I could have passed the drill as a 12-year old with no formal handgun training.  I decided to see for myself and ran the students through the drill at the start of my class.   I had 14 students in the class. NONE of them passed on the first try.

After 300 rounds more shooting and a day’s worth of me fixing all the issues their CCW instructor should have cleaned up, I’m pleased to note that eight out of the 14 passed when I ran the drill again at the end of class. Everyone else was very close, going slightly over the time limit or throwing 1-2 rounds outside the circle. One of the students made this statement:

“I’ve been around guns all my life and thought I could shoot. Now I’m scared to walk around in public knowing that most people with a CCW permit shoot worse than I performed at the beginning of class and still think they know what they are doing around guns. I had no idea that I was completely clueless before learning the stuff in this class.”

All the students who took my class today now “get it.” They know now that there is an entire world of techniques that they never even knew existed and are they excited to learn more.  As a firearms instructor, I am constantly trying to figure out how to convince the 95% of shooters who have never taken a firearms training class beyond their CCW certification that they need to perform at a higher skill level than they currently possess.  I want the people who have never really trained to have the same “aha moment” that my students had last weekend.

I’m starting to think that exposing shooters to a controlled “failure” and then immediately showing them how they can improve their performance with a little bit of coaching is a critical component to this process.  If shooters don’t know how bad they are and don’t know how good they can get, why would they see the value in advanced tactical training? The question is: “How do we get students to “fail” on their own in such a way that they recognize the fact that they need more training?” It’s easy to show them the light in classes, but we have already convinced the people in that environment. The ones seeking training aren’t the ones who need it the most.

How do we get people to objectively rate their own performance with a pistol as sub-par outside of the classes we teach? The answer to that question may be the key to cracking the code about why most students will never attend higher-level shooting classes.

Readers, here is your challenge.  Try the 5 x 5 drill.  Better yet, try Claude’s variation called the 6 x 6 drill.  If you pass, awesome.  You’ve achieved a basic level of competency with your firearm.  Consider it like you’ve achieved a high school diploma in gunfighting.  Realize that there is a whole world of higher education beyond high school.  I’d encourage all of you to seek out enough training to qualify for the gunfighting equivalent of a bachelor’s or master’s degree.

Once your skill level is high enough, encourage your non-training friends to try the test.  Most will fail.  That’s good.  They need to recognize the need for improvement.  If your shooting buddies or family members fail the test, steer them to a qualified instructor for additional training.

Nothing but good can happen in the world if we create more shooters who have a higher level of knowledge and a greater level of skill with their carry pistols.