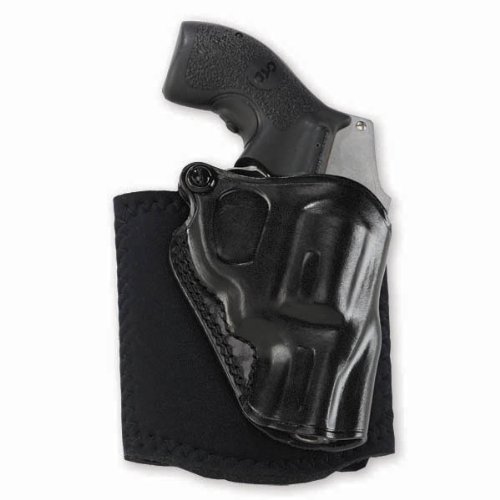 I recently received this question from a reader.  Considering the popularity of the snub nose revolver as a carry pistol, I figured it would be useful if I answered the question in a blog post:

“I’m looking to pick up a S&W 340PD here soon as a backup or pocket gun to add to my daily carry.  I’m looking for recommendations on carry ammo for it, what ankle holsters to look at and the best way to carry extra ammo (what’s the best speed strips to use)?”

Ammunition– Let’s look at the ammunition question first.  To start out, even if you have a revolver chambered in .357 magnum, I would still recommend carrying .38 spl. ammunition in it.  The .357 magnum’s reputation for excellent stopping power was made in guns with four to six inch barrels.  It loses A LOT of velocity when fired out of a two inch barreled snub.  Take a look at this table.  Then compare the same weight bullet in the .38 spl in this table.  The .357 magnum on average only pushes the bullet out of a short barrel about 100-150 feet per second faster than the same weight bullet fired from a .38 special.

That marginal increase in velocity comes at a heavy cost.  The recoil of the .357 magnum out of a snub is quite excessive.  It creates a horrendous flinch and dramatically slows your followup shots.  If you don’t believe me, watch the video below….and recognize this is a full size revolver.  The difference is even more dramatic in a snub.

My study of handgun stopping power shows that it takes an average of two to three good hits to stop the aggressive action of an attacker, regardless of caliber.  How fast can you get those three hits from a .357 magnum snub?  How fast can you get the hits from a .38 spl. snub?  I really think carrying .38 spl. bullets in your gun is the better choice.  If you don’t trust my opinion, you should probably believe the world’s leading ballistic researcher Dr. Gary Roberts.  He thinks the .38 spl is the way to go as well:

“There is no reason to go with .357 mag in a J-frame, as the significantly larger muzzle blast and flash, and harsher recoil of the .357 Magnum does not result in substantially improved terminal performance compared to the more controllable .38 Special bullets when fired from 2” barrels.“

What .38 ammo should you carry?  Let’s start with a bit on handgun ballistics.  Handgun bullets don’t do anything magical.  They simply drill holes.  Bigger and deeper holes increase the chance of hitting a vital organ or causing the bleeding that will eventually render your attacker unconscious.  In general, we want a bullet that will penetrate AT LEAST 12″ of ballistic gelatin to ensure adequate penetration.  We’d also like a bullet that expands to at least 1.5X its original diameter.  Of those two criteria, penetration is more important than expansion.

The problem that we have is that it’s very hard to create a .38 spl bullet that will both expand and adequately penetrate from a two inch barrel.  Many will expand aggressively, but penetrate only eight to ten inches.  Many more will plug up (especially when clothing is covering the gel) and fail to expand at all.  There are only a few bullets on the market that regularly meet desirable expansion AND penetration characteristics.  Out of all the gelatin tests I’ve seen and participated in, these are the bullets I’ve found to work the best.

Any one of these rounds is likely to be a great performer in your .38 snub.  Pick the one that shoots to the closest point of aim in your revolver.  Lots of folks have asked me questions about the newer Federal HST Micro load.  I’ve seen really inconsistent performance in gelatin testing with that round.  Sometimes it expands, most of the time it doesn’t.  I can’t recommend it at this time. 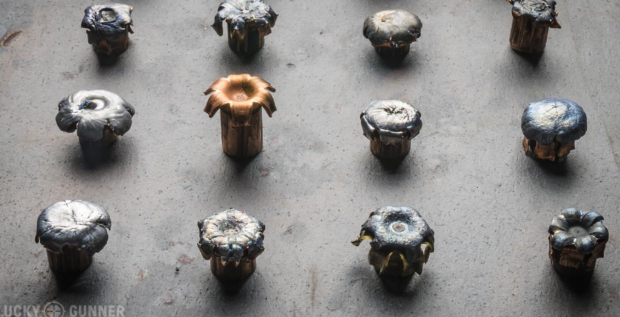 One other round to consider is the standard pressure 148 grain full wadcutter target round.  It doesn’t expand, but its sharp edge causes significant tissue damage as it pokes a full caliber hole in flesh.  The round penetrates deeply and has very little recoil.  Remember, most commercially available .38 spl defensive loads plug up in clothing and fail to expand.  Expansion isn’t all that critical.  Deep penetration and very little recoil make for a good combination in a snubnose revolver.

Some of the more astute readers may notice that some of the rounds are “+P” and some are standard pressure.  There is some concern about “+P” rounds hastening the wear in older aluminum framed revolvers.  It’s possible, but not likely.  The NYPD firearms training unit ran 5000 rounds through an airweight .38 Smith and Wesson revolver.  There was no measurable wear on the gun.  It did not blow up, shoot out of time, or have the frame stretched by firing the higher pressure rounds.  If concerns about pressure bother you, choose the Cor-Bon or the wadcutter round.  I personally don’t worry about it.  Even in my vintage airweights, I train with standard pressure loads and carry the heavier +P rounds as defensive ammunition.

Ankle Holsters for the .38 snub– I will happily give my recommendations, but please realize there is a lot of “personal preference” that comes into play when evaluating the relative comfort of any holster (especially one that wraps around your ankle).

Two ankle holsters that I can highly recommend are the Galco ankle glove and the DeSantis Die Hard ankle holster.  I’ve carried both extensively and both have performed well.

Spare Ammunition- While speedloaders (or moon clips) will undoubtedly provide the fastest revolver reloads, they don’t allow for “tactical” loading of fewer than an entire cylinder full of rounds.  They are also fairly bulky to carry.  Most people who carry .38 snubs, do so because they don’t expect to need a lot of ammo or a fast reload.  For those folks, (me included) a speed strip will work much better.  The speed strips are a little slower, but carry very flat in a pocket.

Bianchi first invented the speed strip.  Their product is still available and works well, but you are limited to five or six shot versions.  Tuff Products has refined the original design with their Quick Strips.  They make different colors and sizes from five to 10 rounds.  I’ve found the Quick strips to be a little more durable as well.

I carry an eight round Quick Strip loaded with four or five rounds as spare ammo for my snub.  You can try it yourself, but I’ve found that having a gap between every two rounds on the strip makes loading much smoother and faster.  I leave one space empty at the end of the strip that I can use as a hand hold if I grab the strip the “wrong way.”  This essentially makes the strip ambidextrous.  I then have two rounds together and a space.  If I need the fastest reload, I’ll load those two and then close the cylinder and resume firing.  If I have more time, I can then load the other three rounds.  Check out the photo for an illustration of what I am saying: 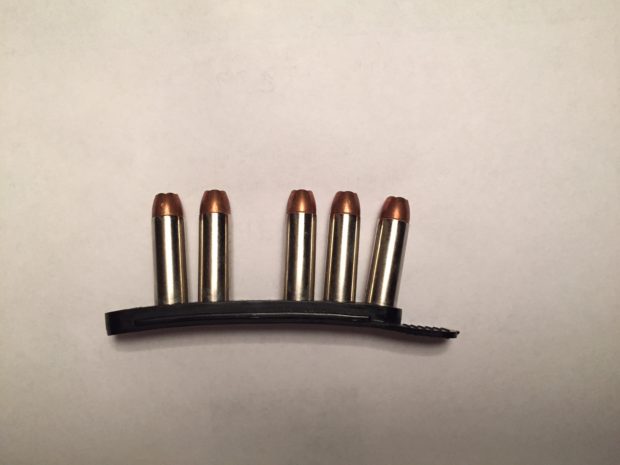 Here’s one other old-timer secret…

If you want to carry even more spare rounds “speed strip” style, use an SKS stripper clip.  The case head diameter is close enough between the .38 spl and 7.62 x 39mm rounds that the .38 rounds fit perfectly.  Just slide the rounds off the end of the strip one at a time.  You can carry nine or ten rounds of .38 ammo on a single SKS stripper clip that only costs about fifty cents!