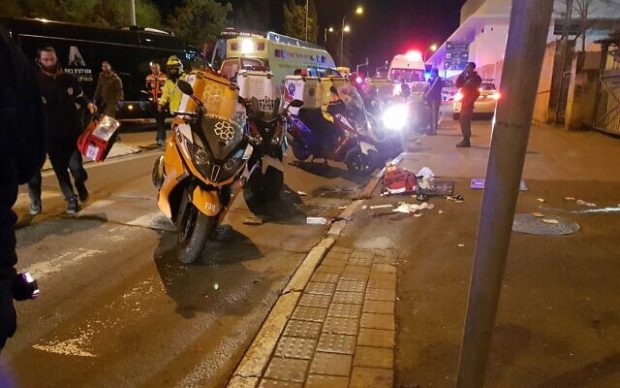 Last week, there was yet another terrorist vehicle run-down attack.  This one was in Israel.  You can read about it in the link below.

A couple points after looking at this attack…

2). The primary response to such an attack is to escape. You won’t initially know if this is a terrorist attack, a drunk driver, or an elderly person who is confused and driving on the sidewalk.

I’ve responded to a few different vehicle versus multiple pedestrian crashes in my career.  I’ve also had vehicles accelerating towards large crowds of people on a parade route and at least a dozen vehicles crashing into public buildings.  None of them were terrorist attacks.

When a car goes up onto the sidewalk, chances are that it’s more likely a drunk or a person with a medical emergency than an Islamic terrorist.  Your first response shouldn’t be going to guns.  Instead, try to avoid being run over.  Don’t worry about drawing your gun until you are safely away from the speeding vehicle.

3) If you’ve avoided or survived the attack, it MAY be appropriate to draw and fire. I personally would not shoot if the attacker was merely driving away after the attack (although it might be legally allowable in some circumstances).  If you shoot the fleeing driver and it turns out that the driver is indeed a terrorist, you’ll be a hero.  If you miss (hitting an innocent party) or you kill some drunk driver or old person in a diabetic emergency, you’ll go to jail.  The rewards in that case aren’t worth the risk in my calculation.

I would only shoot if the terrorist was continuing to mow down pedestrians. Just remember, handgun bullets don’t fare well against speeding cars. Stopping the driver will be a better strategy than disabling the car.

Watch your backstop. There will likely be a whole lot of innocent people downrange.

4). If you do plan on shooting, your gun should be loaded.

“This happened in seconds. We understand that some soldiers tried to put magazines into their guns and tried to go after the car, but this happened quickly,” he told reporters.“

This terrorist got away before the soldiers had time to put magazines in their rifles. “Israeli Carry” doesn’t even work in Israel.

5).  Mass casualty triage is an important skill to have.  Read the description of the incident below.

“When we arrived at the scene we saw chaos; three youths were lying on the sidewalk, and nearby nine others were gathered who had been hurt,” said medic Oz Pollak.

Imagine being the only trained rescuer at this scene.  You have 12 patients.  Who do you treat first?  If you don’t know, I would suggest taking some advanced medical training classes.  You are far more likely to run across a multiple casualty car crash than you are to get involved in a gun fight.  Good medical training is at least as important as firearms training.

These attacks are only going to become more popular in the future because they are almost impossible to stop.  Study up.  Take a look at the links below to learn more about how to be better prepared to respond to this unique type of terrorist attack.