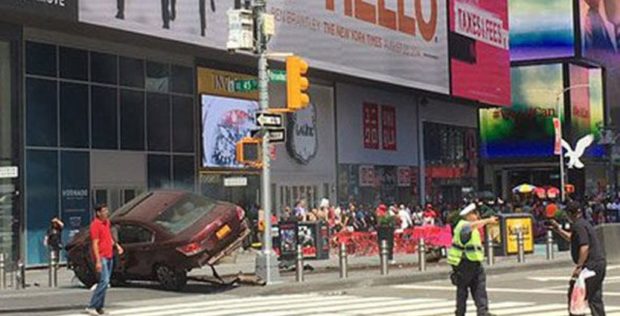 Yesterday a criminal/terrorist used a vehicle to attack a Christmas parade in Wisconsin.  Twenty people were struck by the car and five died.  For more info, read

The attack was stunningly similar to  an ISIS terrorist vehicle ramming attack in London back in 2017.

Why all the vehicle attacks?  The ISIS propaganda publication Rumiyah has specifically called for Muslim terrorists to use vehicles and knives as weapons against the Western world.

“The latest issue of Rumiyah, a new magazine from the terror group aimed at English-language speakers, included an article titled “Just Terror Tactics” that outlined ideal vehicles to use in terror attacks as well as ideal targets.

“Though being an essential part of modern life, very few actually comprehend the deadly and destructive capability of the motor vehicle and its capacity of reaping large numbers of casualties if used in a premeditated manner,” the article said.

The article also cited the attack in Nice, France, in July, in which a supposed ISIS supporter killed 86 people by plowing into a crowd with a truck on Bastille Day.

“Vehicles are like knives, as they are extremely easy to acquire,” the article said.” 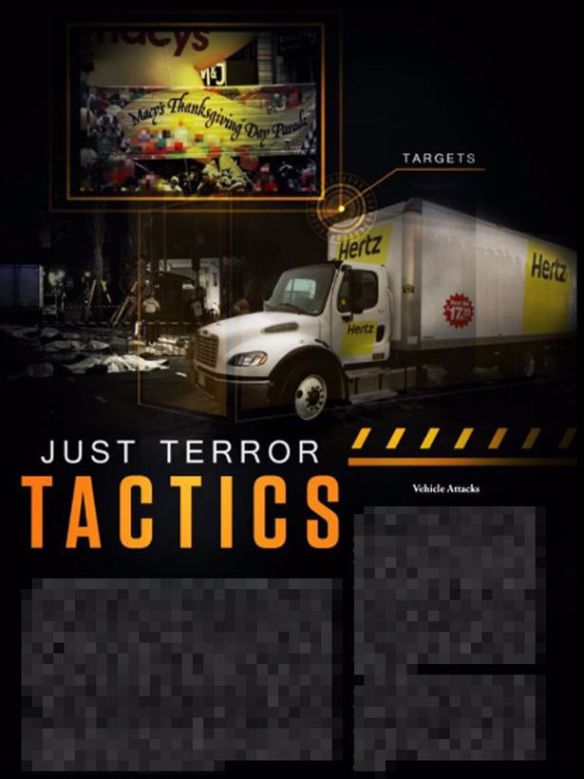 Clearly, terrorist vehicle attacks are on the rise.  What can we do to prevent being killed in such an attack?  Here are a few useful tips to keep you alive.

1) Face traffic when walking along the street.  These attacks really aren’t preventable.  Your best bet is to see the attack coming as quickly as possible and take evasive action.  If you are walking along a sidewalk with your back facing traffic, you can be run down very quickly from behind without any warning.  It’s better to face oncoming traffic.  That way, if a car hops the curb and starts barreling along the sidewalk towards you, there may be enough time to dodge it or get inside a building before you get hit.

2) If you have a choice, walk along streets that have vehicle blockades or cars parked at the curb.  Some urban areas have vehicle blockades to prevent cars from driving onto the sidewalks.  Where possible, walk on sidewalks that utilize those protective features.  If they aren’t available, use the next best thing…parked cars.  A street lined with parked vehicles will make it difficult for a terrorist to get up on the sidewalk with his car.  Take a look at the road below.  One side of the street would be much safer to walk on than the other. 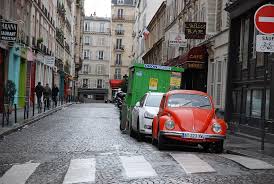 3) Watch for danger signs.  Be alert for speeding vehicles, sounds of collisions, revving engines, or sudden unusual vehicle movements.  If you see or hear something that is outside of the norm for your environment, don’t just blow it off.  Look around and actively figure out if you are in danger.  During attacks like these, a second or two of forewarning can be the difference between life and death.

4) Don’t rush to help the injured.  In each of the historical worldwide vehicle attacks, injured people were stacked on the sidewalk like cord wood.  Immediately after the attack, you may feel compelled to rush in and help those who have been hurt.  Take a moment and assess the scene before wading into the chaos.  Is the crashed vehicle a danger?  Are there people in the area shooting or cutting people with knives?  Is it possible that there is more than one attacker?  I’d want to know the answer to all of those questions before I become completely distracted from my environment while providing aid to the victims.

Look at this news article.  Victims in the London vehicle attack initially thought the suspects were running up to help the injured.  In reality, they were closing the distance and “finishing off” the people they had already hit with the car.  The attackers were stabbing, kicking, and striking the defenseless victims, not giving first aid.  The folks you think are coming to help may be the perpetrators instead.  Don’t fly into their spider web.

Remember, you won’t be able to help anyone if you become a casualty as well.

5) Move indoors immediately, but don’t stay there.  A sturdy structure offers a decent refuge from a vehicle driven by a terrorist intent on killing people.  Get inside quickly.  Stay away from large glass windows/doors and exterior walls.  Once you get inside, you are relatively safe against a vehicular weapon. The problem is created, however, when waiting with a large group of people indoors exposes you to risks from terrorist attacks that are conducted in the more traditional manner of shooting, bombing, and stabbing.  You don’t want to be huddled up into a tight group without an escape route.

In each of previous Islamic terrorist vehicle attacks the suspect(s) stayed outside in the area near the crash site looking for more victims to shoot or stab.  The London attack was different.  The three attackers fled the crash scene and began stabbing and slashing victims who had sought shelter inside bars, restaurants, and retail stores nearby.  Being inside a building might offer protection against a vehicle, but it won’t help you when the killers enter your hiding spot and begin cutting or shooting.

The safest course of action you can take in a terrorist vehicle attack is to get inside, off the street and sidewalks.  This safe haven you chose may soon become the next battleground.  Don’t hang out there.  Seek shelter immediately to buy yourself some time.  As soon as it is possible, flee the area from the building’s rear exit. 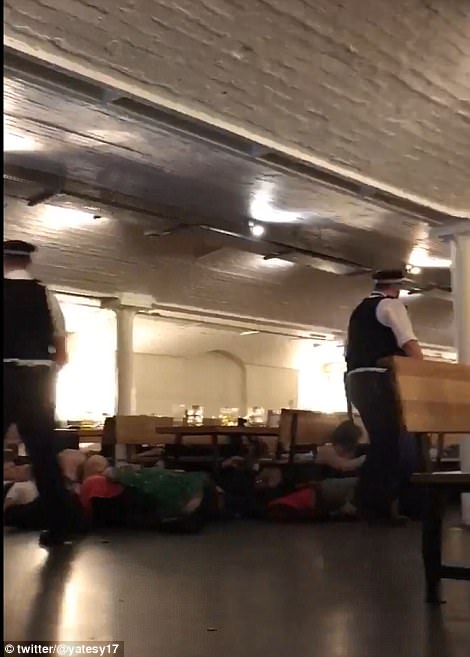 Victims hiding inside a bar after the attack in London. The attackers broke through the exterior bar windows and stabbed more patrons inside.

6) Stay away from the attack vehicle and be alert for secondary attacks.  Here’s my prediction for the next evolution of this type of attack. Terrorists will place a bomb in the car they used to run people over. Explosives set to go off 10 minutes after the vehicle attack. It’s the perfect secondary device. The bomb will kill all the first responders and anyone giving aid to the victims.

After the attack, distance yourself from the suspect’s crashed car.  It’s too easy to hide additional attackers or a large bomb inside.

7) Don’t draw your firearm while you are attempting to figure out what’s happening.  Those of you who regularly carry firearms may decide that the best course of action is to shoot the attack vehicle driver or his terrorist accomplices.  That’s great.  I commend you for any assistance you are willing to provide.

Just recognize that it’s going to take you a few seconds to figure out what’s happening.  Keep your gun in your holster while you are evaluating the situation and making your hasty battle plan.

The cops will be coming quickly.  There may be other CCW carriers on the scene.  You standing around a bunch of dead bodies with a gun in your hand is a look you probably want to avoid.  Keep your weapon hidden until you need to use it.

Use parked vehicles for cover whenever you have to stop while walking.

If you are walking on a busy street and need to stop in order to tie your shoes, write a text, or speak with a friend, stop at a spot on the sidewalk that offers you some protection from a car hopping the curb.  Look at the picture above.  The gaps between the parked cars are the likely routes the terrorists will use to get onto the sidewalk.  Don’t stand there.  You are much safer if you keep a parked car between you and the traffic lane like this group did.

Don’t loiter in any spaces that the terrorists can use as drive lanes.

9) Be able to deal with charging attackers.  Few “gun people” train empty hand defenses against a person who is attacking with a bladed weapon.  Many delusionally think “I’ll just shoot him” is an adequate response.  While I have no problem with anyone shooting an armed terrorist, it may not be quite as easy as you think it is to pull off.  Shooting bullseye targets is one thing.  Shooting as you are being slashed or stabbed is a different skill set entirely.

It’s even more difficult to deal with an attacker who is running full speed at you with an upraised knife.  You have to move!  If you stand still and draw your gun, you’ll likely get stabbed.  The sprinting attacker can move much faster than you if you try to back up in order to keep your distance.  A person moving forward is faster than a person backing up.  If you try to back off to create the distance you need to draw your gun, you will also likely be cut.

There are techniques I teach to deal with charging attackers at close range.  What is generally most effective is for the victim to move FORWARD, towards the attacker at a 45-degree angle, preferably towards the side opposite the hand your attacker is using to hold the knife.  That hard, angled movement forces the attacker to slow down and change course.  That usually buys you enough time to get your gun in play.

Try this technique for yourself.  Use a replica pistol and a partner with a training knife.  Have the partner charge at you from distances between five and twenty feet away.  As your training partner attacks, try different movement patterns to facilitate your draw.  Try not to get cut as you are drawing your gun.  You’ll find that this forward angling technique works better than any other option you may try.

10) Know how to treat knife wounds, vehicle impacts, and blast injuries.  Having the knowledge to treat battlefield injuries is absolutely critical in today’s world.  Your Red Cross First Aid/CPR course is not adequate training to prepare you for the mass casualty battlefield trauma environment.  Seek out a quality “tactical first aid” class.  If you can’t get to training, at least read my article Field Medicine for Terrorist Attacks.

Carrying medical gear like a tourniquet and hemostatic gauze while in large crowds is a smart idea.  Get some medical training and carry a tourniquet with you any time when you are in a situation that may be ripe for a terrorist attack.

I hope none of you will ever have to use this information, but my rational brain says it’s only a matter of time when attacks like this become a daily occurrence. 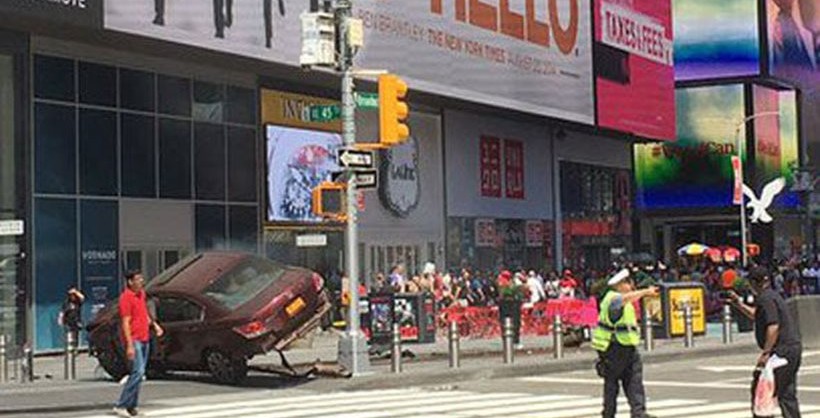