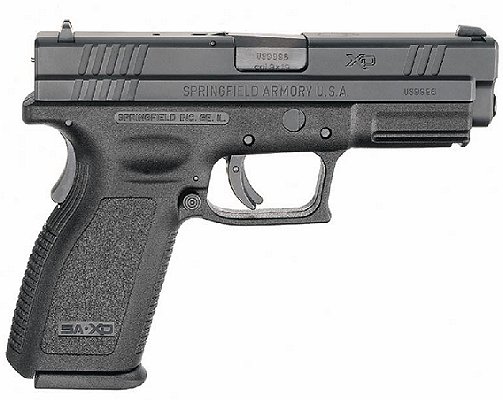 A recent discussion on my Facebook page prompted me to write an article to explain why I really don’t care for the Springfield XD pistol.  I’ve seen hundreds of the guns go through my classes in the last decade.  I remain unimpressed.

The gun’s main selling point seems to be “it’s not a Glock.”  Most people who initially buy them just don’t like Glocks for whatever reason.  They want something with Glock-like performance without Gaston’s name written on the slide.  It’s a bad choice.  The XD isn’t as reliable as the Glock (or several other different subcompact pistols).

Other folks attracted to the XD like the grip safety.  This crowd  often consists of the new CCW carrier who doesn’t yet feel comfortable carrying with a loaded chamber.  They like that the grip safety provides an additional element of security for carry.  If you don’t feel comfortable carrying with a loaded chamber, you need more training, not a gun that makes shooting more difficult.

In my classes, the XD pistols are not horrible performers, but they do malfunction at a rate higher than I see with comparable Glock or S&W pistols.  The magazines seem to be a big issue.  I’ve seen more weakened springs and bent feed lips than in other manufacturers’ products.

Beyond that, the grip safety creates some issues with shooters who have small or weak hands.  A problem occurs when students have a suboptimal grip and don’t fully depress the grip safety.  Since the grip safety must be depressed in order to rack the slide, they can’t properly charge their pistols or perform malfunction clearing drills.

I know a lot of you XD users will say “That’s never happened to me!”  My question to you is: have you ever practiced after really fatiguing your grip to simulate a life or death struggle?  When is the last time you’ve worked support side one-handed malfunction clearances?  That’s where I really see a lot of failures.  Most casual shooters will never see such a thing because they don’t train hard enough to induce the malfunctions.

When the gun first came out, a lot of my fellow instructors at the Tactical Defense Institute adopted it as a carry gun.  All switched back to Glock or Smith and Wesson pistols after less than a year of carrying the XD.

John Motil, operations manager of TDI explains why in the post below:

“We bought quite a few when Springfield Armory brought them out around 2003.

While the ergonomics were excellent the gun had more problems than other similar guns.

Springfield was selling so many that they never addressed the issues.

The sights were impossible to remove and replace. We had to cut or mill them out to install tritium sights.

The magazines were soft, the feed lips would bend if dropped on asphalt or concrete. I had to buy smooth jaw pliers from Brownells to straighten them out. Blog posts had directions how to modify Beretta magazines to work as a replacement.

The guide rod was a multiple piece affair, the portion that was threaded on was inside the gun. if it broke or unscrewed it would disable the gun. That required a trip to the factory to repair. Most modern firearms have the threaded portion toward the muzzle.

It is easy to press check as the spring has little resistance at lock-up. Not a good thing if the gun is dirty or the cartridge is out of spec. The loaded chamber indicator can accumulate crud to give a false indication.

The extractor was a spring, just like a 1911. If you had to snap it over a stuck cartridge you could damage the hook.

The tang of the gun rubs the first joint of the thumb. The MCP joint was rubbed raw on certain individuals. Reshaping the tang with some filing and sandpaper usually fixed the issue.

The trigger had no distinctive reset. It was a good trigger, but had just a mushy feel throughout.

How many LE Agencies adopted the gun? You will have to ask Springfield Armory that question. I don’t know of any.

Also there are no factory sponsored Armorer Classes. All repairs are done back at the factory.

The bottom line is if you shoot it well and you had no issues, enjoy the gun. We weren’t so lucky and sold them and stick to Glocks and M&Ps.”

I actually attended one of the few factory armorer certification classes ever offered on the XD.  Even though I have the certification, I can’t buy spare parts or fix many of the issues I encounter.  Springfield requires that all serious issues be sent back to the factory.  That alone is enough to make me dump the platform.  I want to be able to fix any gun that I carry.

I think most of you will be better off with another defensive firearm.  Buyer beware.