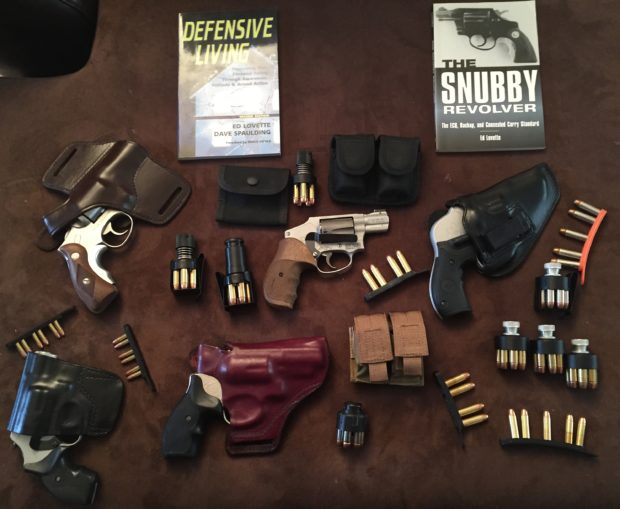 Even though you “tactical types” don’t like to admit it, there are a lot of folks who carry small-framed revolvers for self protection.  But since they are not “cool,” many sources don’t write about them on the internet or in gun magazines.  That leads people to carry revolvers with less than optimal sights, grips, holsters and support gear.  People just don’t know what to buy or which products are useful.  The best way to remedy this inadequacy in knowledge is to attend a dedicated snubby revolver class and put your gear to work.

The Tactical Defense Institute offers one such class and it was held last week.  TDI Operations Manager John Motil was one of the instructors in the class and he wrote up his summary of “lessons learned” for my readers.  Thanks to John for the contribution!

GUNS– The Snubby Revolver class had some nice weather. We had 12 students carrying revolvers of various models from both Smith & Wesson and Ruger.  Most of the guns were either the S&W bodyguard or the Ruger LCR.  No student carried a gun from any other manufacturer.   Interestingly enough, we had a 9mm revolver from each company represented in the class.

The 9mm guns shot to point of aim and the moon clips caused no problems.  If the 9mm has a drawback, it is a lack of roll crimp on the cartridge case.  Without that crimp, after about four shots out of a light weight revolver the recoil energy caused the remaining bullets in the cylinder to start migrating forward out of their cases, thereby locking up the gun.  That’s a problem you will want to take note of if you carry a 9mm revolver for defensive purposes.  Find some defensive ammo that doesn’t allow the bullets to move forward in the cylinder under recoil.  One other thing to note; the moon clips are not interchangeable between S&W and Ruger 9mm revolvers.

Sights– Shooters with sights that were the same color as their guns had problems. Blue on blue or stainless on stainless sights were difficult to discern under stress or less than optimal light conditions.  The XS Big Dots and fiber optic front sights did much better in varied lighting conditions of the range and the indoor shoot houses. If you are looking at a new revolver make sure it has a pinned or dovetailed front sight.  If you have a milled front sight, it’s very difficult to change.  Even though you’ll pay more money for a gun with a pinned front sight, it will be worth it as it give you many more effective sighting options.  One other point to note, XS big dots should not be installed on the Ruger LCR revolvers.  The XS sights cannot be regulated to hit point of aim on those guns.  They work fine on other Ruger revolvers.

Loading Methods- Any loader is better than carrying loose rounds.  The class was split on speed loaders and strips. HKS, Safariland, 5 Star Firearms, and TuffStrips were all used. Most were carried in pockets.  Note that there are essentially two different release mechanisms on speed loaders.  Some loaders require a push and others require a turn of the knob.  Each has its relative advantages and disadvantages.  Both work fine.  The only folks who had trouble were those who mixed loader types.  Don’t carry two different speedloaders with two different release mechanisms.  Under stress, you will inevitably try to twist the push buttons or push the twist knob!

Grips- Grips were mostly rubber and many sported a laser. A few people had issues with interference with their speed loaders.   Check your grips to make sure they are relieved on the left side of the revolver to accommodate the speedloaders that you use.  If your speedloaders won’t fit into the cylinder, get some new grips or dremel off the offending chunk of rubber that is blocking their insertion.  I like how the soft rubber grips feel, but under recoil they almost peel the skin off your palm.   Be prepared if you plan on doing a lot of shooting with the soft rubber grips.  We saw plenty of Coban appearing on day two of the class to cover up blisters and raw spots caused by the soft rubber.

Holsters- Holsters were strong side or appendix and made of predominantly  kydex or leather.  We had one nylon inside the pocket holster.  No matter the holster material or manufacturer, students seemed to have some problems with almost all of them.  I did not see any holsters that allowed the gun to be reholstered easily.  All required some degree of gun manipulation for re-insertion. Even quality rigs needed that little “twist” to open and allow the cylinder to enter.  When buying a holster, ensure it has a rigid opening to allow you to put the gun back inside without muzzling yourself or someone else on the shooting line.

Calibers and “Stopping Power”– Now for my rant, which probably qualifies as a separate post… Guys, your wife, daughter, or girlfriend does not need to shoot the same gun or caliber as you do!   On day two we had a female student complaining about pain and swelling in her hands from shooting a gun that had some fairly stiff recoil.  We had a second female student who only fired 5 shots on day one, before retrieving a padded shooting glove.  The thick pad on the shooting glove put all the stress on the joint of her thumb as she had to rotate her hand around the revolver in order to reach the trigger. Both of these are less-than-desirable outcomes.

Interestingly, these ladies’ guns were chosen by male shooters in their lives.  Because their men didn’t consider the effects of recoil, and concluded that you can’t learn anything from a .22 revolver, I don’t think we achieved optimal results with these students. To give the one lady credit, on day two she asked to try one of our loaner range revolvers in .22 caliber.  She used it the rest of the day. The other lady’s husband was so worried about recoil he bought the Hornady Critical Defense Lite load with 90 grain bullets for the class. She shot $1 a round defensive ammunition in a two day shooting school and still had problems managing the recoil in her lightweight revolver.  For the cost of the ammo consumed alone, that guy could have bought a .22 revolver and a brick of .22 ammo for practice.

Guys, take my advice.  The women in your life may not be comfortable shooting the same guns that you can shoot all day long.  If she isn’t comfortable, she won’t become proficient.  I would much rather have a ladyfriend of mine shooting a .22 revolver that she loves than a .38 that she fears.  Caliber is not all that important!  Lose the ego and find a gun that your loved one actually enjoys shooting.  Both of you will be much happier. – Greg 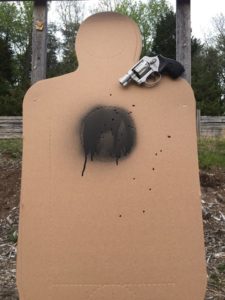 As a side note,
here are the results from part of my (Greg’s) weekend practice session. Smith and Wesson 317 .22 revolver.
8 shots each at 25, 35, and 50 YARDS. All fired as fast as I could pull the trigger and reacquire a sight picture. 23 in center mass and one in an arm.
Does anybody want to say my .22 snub is a “mouse gun” when I can put 8 shots into your chest in 5 seconds at 50 yards?