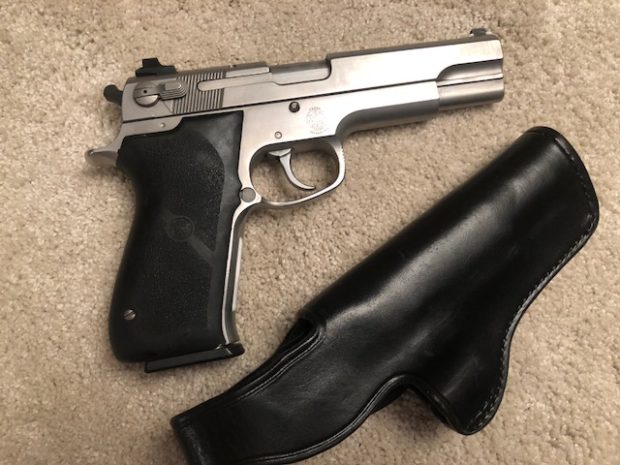 There has been a relatively recent resurgence of interest in the defensive use of Traditional Double Action (Also called TDA or Double-Single) autopistols for defensive purposes.

I think this resurgence is being driven by two primary factors:

1) The development of lighter, shorter double action triggers.  Guns like the Langdon Tactical Beretta have a double action trigger pull that is longer, but isn’t any heavier than most striker-fired pistols.  One big drawback of carrying a TDA pistol is that long, heavy first trigger pull.  As that first shot gets lighter and easier, more people will consider carrying a TDA auto for self protection.

2) The trend of carrying in appendix holsters.  As more people shift to this popular carry method, some want a little longer and heavier trigger pull to reduce the chance of a negligent discharge while holstering.  When the gun is pointed at either your genitals or your femoral artery, having a longer trigger pull is a legitimate safety feature.

So, should you carry a TDA pistol for defense?

I have some unique experiences that provide me some perspective on the issue.  I’m old enough to have been issued a TDA auto as my first police duty gun.  I carried a .45 acp Smith and Wesson 4506 every day at work from 1995-2003.  During much of that period, my off duty gun was a 9mm Smith and Wesson 3913, also in TDA.

I became the full time firearms instructor for my agency in the year 2000 and was responsible for training about 60 cops how to effectively use the traditional double action auto pistol.

In 2003-2004 our department switched to Glock pistols.  I designed the transition course of fire and then taught all my officers how to run a striker-fired pistol.

The experience teaching both weapons systems was invaluable.

The two different trigger pulls on the TDA guns were slightly more difficult to teach and master, but most of my officers shot fairly well (by cop standards) with the Smiths.  Some folks never quite mastered that first long trigger pull, but would quickly start getting hits with every subsequent shot.

Surprisingly, the dual trigger pulls were not the problem that you might expect them to be.  At the time, a lot of the officers had been originally trained on revolvers.  The first pull of the TDA auto is quite similar in feel to a double action revolver trigger.

The bigger training issue was managing the TDA auto’s decocking lever. Teaching a student when to decock while the pistol was still in hand was harder than teaching the double action trigger pull. Getting students to remember to decock before holstering while under a lot of stress was hard work.  When the stress levels increased, I had lots of cops trying to holster cocked TDA pistols.

When my department changed to Glocks, shooting scores improved dramatically. We didn’t have the expected accidental discharges when holstering. We got more ADs when taking the guns apart for cleaning.  The shorter trigger pull didn’t seem to cause any problems, even when officers were used to holstering a gun with a much longer and heavier trigger.

The officers who had the worst problems overall were the ones who carried the Glock on duty and a TDA gun off-duty or as a backup.

Within about a year, the officers were completely adapted to the Glock and would fail to decock their other pistols before holstering 70-80% of the time. That problem just got worse and worse over the years as students developed better neural pathways for handling the Glock while simultaneously neglecting to practice with their TDA backup guns.

Can the traditional double action be an effective self defense weapon?  Absolutely.

Overall, some of the top shooters can clearly do well with a TDA gun.  In my recent trip to Ronnie Dodd’s Rogers Range in Tennessee, Brandon Powers took top shooter award with a Langdon Beretta.  I’ve seen Ernest Langdon, Claude Werner, and Spence Keepers shoot with a DA pistol and have been impressed.

In my experience, the average shooter will perform better with a striker fired pistol. There are safety advantages of the TDA pistol, but those have to be weighed against the dangers of a poorly trained operator armed with a TDA holstering a cocked pistol.

Overall, my conclusion is that when considering training efficiency, it’s faster and easier to teach the shooter how to safely draw and holster a striker-fired pistol than it is to teach the same person how to safely manage a DA/SA trigger and decocker.  Your mileage may vary.