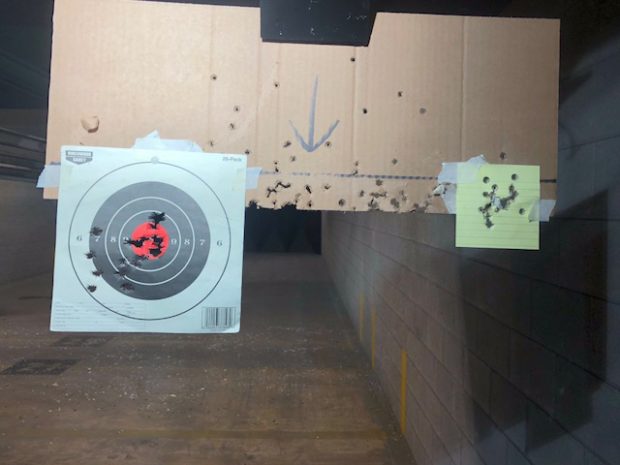 As I plan to do every session this year, I started out shooting the Consistency Target.  Two passes through this one.  Both under the par time.

After that I followed up with Mike Seeklander’s “Extend and Press” Drill.  I fired 40 rounds with my Glock 17 and an additional 40 with my Glock 42 on this drill at 15 feet.  I used a seven inch bullseye for the “large” target and a large post-it note for the “small” target. 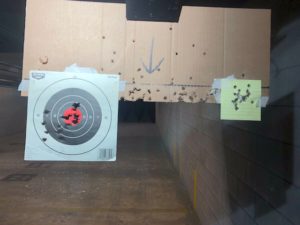 I finished up with one magazine each hand of slow fire single handed shooting with both guns.  I used the post-it note target at 15 feet for that.

One other noteworthy occurrence…

Before today’s shooting session, this particular Glock 42 had 1137 rounds fired through it.  I think I managed to break the trigger spring.  While shooting, the trigger stopped returning to the normal position after I had fired a round.  The trigger would work, however, if I pinned it to the rear on recoil and slowly let up to “catch the link.”  That type of functioning is indicative of a broken trigger spring.  Since I don’t have any spares for that particular gun, I haven’t broken the gun down to verify exactly what happened.  When I do so, I’ll share some photos so you can see what things look like on the inside of a broken gun.

What most of you don’t realize is that ALL guns fail at some point.  If you shoot enough, you’ll break every gun you own.  I wouldn’t have expected this gun to start puking so early in its service life, but stranger things have happened.  Have a backup firearm in case your primary breaks.  Learn how to fix your carry guns.  It’s a skill that will be tremendously useful to you in the future.  I personally don’t carry guns that I can’t fix if they break.