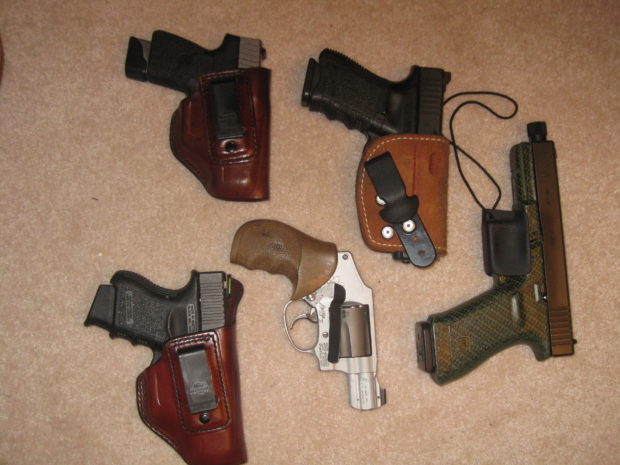 “95% of criminals carry their guns on their strong side, mostly stuck in the front of their bodies, inside the waistband without a holster.”

– From a US Secret Service Seminar on detecting concealed weapons

Why are all the thugs carrying pistols in their waistbands in front of the hip?  And why do most cops and CCW permit holders carry behind the hip?  Are there lessons to be learned from the bad guys?   As one of the few cops who actually carries his gun in the front “appendix” position, I say “yes”.

When I started out in law enforcement, my first off-duty carry gun was a .38 snubnose revolver.  Fresh out of the academy and not knowing much, I bought a thin, suede, inside the pants holster with a crappy spring steel clip and started carrying the gun everywhere I went.  With no one to tell me how and where to carry, I just stuck the gun and holster inside my waistband in the “appendix” position, strong side in front of my hip.  If the circumference of my waist was a clock with the belt buckle being 12-noon, I placed the gun somewhere between one and two o’clock.  Why?  Because that was where it was most comfortable.

As times changed, I learned more about guns and had some more disposable cash.  I upgraded to a semi auto pistol for my off duty carry gun and started carrying behind the hip.  In the mid 90’s no one made quality appendix style holsters for most semi autos and no one carried that way.  I just followed the herd and did the same thing as all the other people I saw.  I carried my gun behind my hip.

Everything was fine.  I carried a large variety of guns that way over the course of many years.  I never had any problems.  Then one day in 2003 I competed in the “National Tactical Invitational”, a two-day, invitation only shooting match that combined target shooting, IDPA style stages, building clearing tactics, and force on force scenarios.  For the force on force scenarios we had to use their guns (Smith and Wesson .38 revolvers loaded with paintball rounds).  Before competing, they patted me down to check me for “real” weapons and handed me a .38 snub and a flimsy inside the waistband holster.  Without even thinking, I stuck it in the front of my pants, appendix style, just like I used to do and entered the arena.

During the course of the three-hour run of scenarios in their “town”, I found the appendix style to work very well.  I consistently outdrew my competitors and teammates from the seated position and even seemed to be faster than usual in the standing scenarios as well.  In one scenario, I even surprised a bad guy by concealing my draw with a large notebook I was forced to carry.  I knew trouble was eminent and I preemptively drew my gun, keeping my drawstroke and the gun hidden behind the notebook.  The bad guy had quite a surprise when he went for his gun and found himself looking down the barrel of my .38 before he could draw.  I was starting to like this appendix position better and better!  I knew I couldn’t have pulled off that move if I had carried my gun behind my hip.

Since that day at the NTI, I’ve been committed to exploring appendix style holster options and modes of carry.  Now, I carry my off-duty guns in front of the hip m 100% of the time.  Here’s why:

Faster Drawstroke– A smooth and speedy draw depends on economy of motion.  There is simply much less motion associated with drawing from the front of the hip versus behind the hip.  Less motion equals a faster draw.  In addition, it is easier to clear cover garments with your off hand when carrying concealed.  The off hand doesn’t have to reach as far and your covering garments are removed with less chance of your gun getting caught in them.

Ability to conceal the draw– Everyone who has spent any time on the range has seen thousands of drawstrokes as people draw their guns from behind the hip.  They are familiar with that telltale moving of the elbow up and back.  It’s a very easy movement to detect.  When drawing from appendix, all of the movement is in the lower arm and hand.  The elbow doesn’t have to move.  That gives you the ability to preemptively draw the gun without your potential attacker knowing you are drawing.  All you need is something to conceal the gun behind.  A jacket, briefcase, or grocery sack all work well to hide the draw.

Better retention– Most in-holster firearms retention systems involve “locking down” on the gun with one or two hands to try to keep the gun in the holster when someone is trying to take it from you.  It is much easier to get two hands on the gun if it is in front of the hip.  Even if you are only using one hand to keep the gun in the holster (as you vigorously attack the criminal with your other one), you can push down harder and put more weight onto the gun if your hand is in front of your body, instead of on the side or back.

In addition, someone who is trying to “foul” your draw by controlling your weapon-bearing limb will find it much more difficult to stop your draw, especially if his techniques involve controlling the elbow.  With the elbow and hand close to the body there are fewer places your attacker can exploit to prevent you from drawing your firearm in close quarters.

More comfortable and a faster draw when seated– Many of us spend much of the day in a seated position.  It’s far more comfortable to have your gun in front rather than sitting on it or allowing it to bang up against chair arms.  You also won’t have to contort your body by leaning forward and twisting in order to draw your gun.  That means you can draw your gun quicker and with less effort.

Easier access with the non-dominant hand– In a gunfight, your gun-side hand or arm could be hit by a bullet and incapacitated before you draw your gun.  Have you ever tried to draw your gun from a holster with your non-dominant hand?  Unless you are really skinny and have the flexibility of Gumby, it will probably be very difficult for you.

Not so if you carry your gun in the appendix position.  You can either turn your palm outward and execute the “cavalry twist draw” or roll the gun over on your belt line.  Please practice both maneuvers with an unloaded gun several times before you try them on the range.

This easier access also means the gun is easier to draw (with either hand) if you are fighting on the ground.

Better concealment– This reason might be the most important for all you CCW permit carriers and off duty cops.  Think about the times your gun “prints” through your shirt when carrying behind the hip.  Your gun won’t print as much when you carry it in front.  If your chest is larger than your waist, your shirt will have a natural drape in front doesn’t happen in the back.  That means the shirt hangs looser at the beltline in front than in the rear.  The extra drape hides a gun well.  Check out the photos below where I am in social situations concealing guns carried in the appendix position under light t-shirts or even tank tops.

If you carry the gun behind the hip it also tends to print when you bend forward.  The opposite occurs when you carry the gun in front.  It only prints when you lean your upper body backwards.  Think about your daily activities.  I bet you spend more time bending forward than you do leaning back.  Most of the time, that means a gun in front will be better concealed.  Save your behind the hip holsters for your next limbo contest! 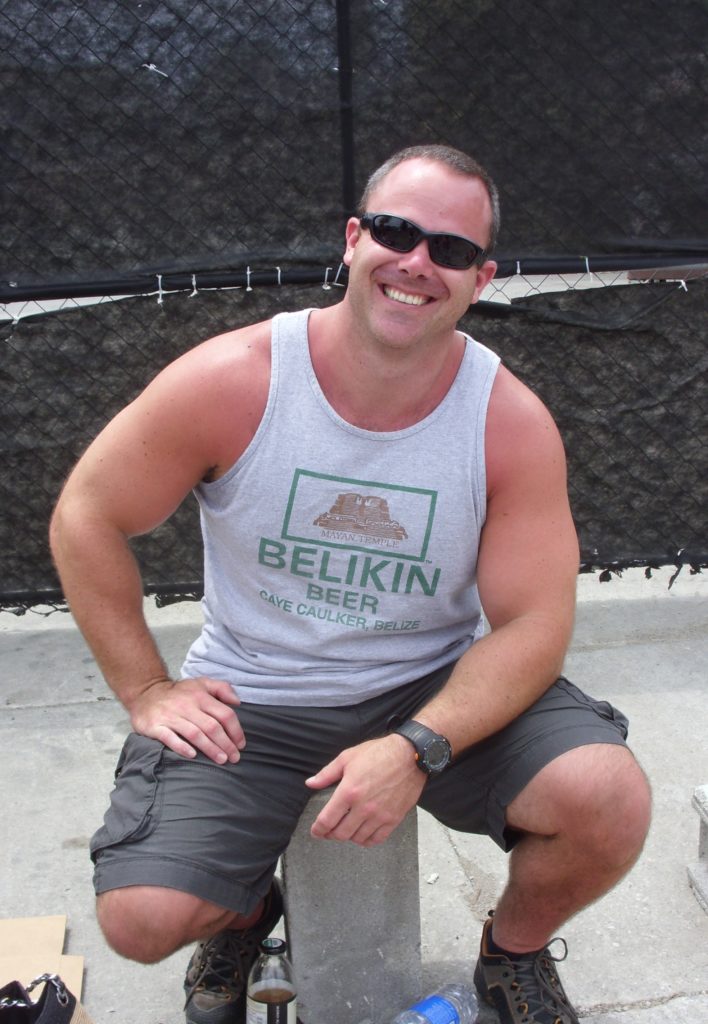 Concealment isn’t a problem. Here the author is concealing a Glock 19 in an appendix holster while wearing a tight tank top

Despite my fondness for it, carrying in the appendix position isn’t always the best option.  Comfort and concealabilty really depend on body type and your gun/holster combination.  Most folks find they can conceal small and mid sized guns more comfortably than the larger guns.  Full sized weapon tend to poke a lot of people in the thigh or groin in certain positions (especially sitting).  I find that I can carry my Glock 26 or 19 all day with no discomfort.  If I try to carry my Glock 21, I find it unbearable.  Your experiences will vary.

There is also a very real danger of killing yourself if you have an accidental discharge while drawing or holstering.  The majority of accidental discharges we see on the range occur when a student is drawing or holstering the gun.  When the holster is worn on or behind the hip in the traditional position, the discharge generally just creates a grazing gunshot wound to the buttocks or leg.  If a student discharges a weapon in the appendix position, the muzzle is pointed directly at the genitals and femoral artery!  People who carry guns this way need to be extra careful when drawing and reholstering!

Get a good belt and a holster that is expressly designed for appendix carry.  Many holster companies make holsters with an adjustable cant to make appendix carry more comfortable.  The canted holsters angle the butt of the gun toward the strong side making for a better draw (the wrist stays locked) and more comfort.  Some people do fine with the straight draw and some like the canted angles.  Try both and see what fits your body well.  I prefer my holster to be canted.

Don’t use crappy nylon or suede holsters with plastic or spring steel clips!  I can’t tell you how many times I’ve seen people draw their gun with the holster still attached when using these!  If you spend $500 on a gun, why would you carry it in a $10 holster?  The most stable holster clips I have found are from  HLR Discreet Gear Clips. 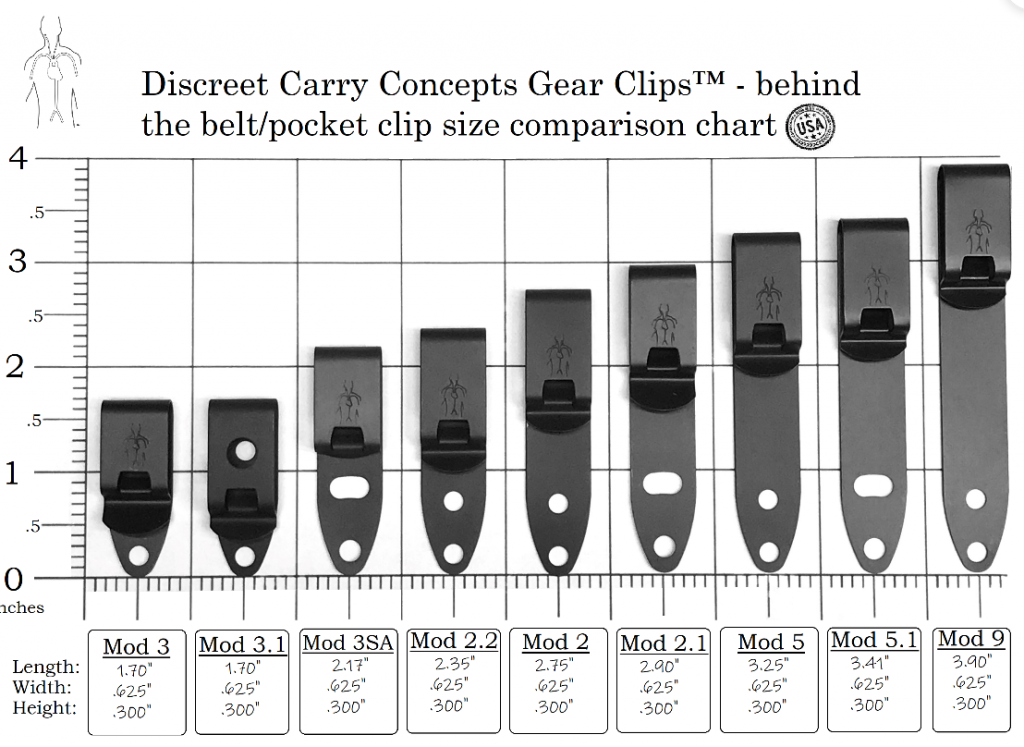 Many other holster makers have quality holsters for appendix carry.  Check out a variety before making your decision.  My personal favorites are:

You will be happy with any of the appendix holsters these folks make.

Wear a dark colored shirt, preferably one with a pattern near the beltline.  The darker colors and patterns conceal the gun much better.

The only other tip I have for you is to drop some belly fat!  Seriously, bigger bellied folks don’t like this carry method.  It isn’t nearly as comfortable as some others.  Even people without huge “Twinkie tumors” will benefit from a thinner waistline.  More fat pushes the gun outward and makes it less concealable, so get some exercise and drop a couple pounds!

If you haven’t yet tried appendix carry, I would tell you to go for it.  It has a lot of advantages.  For once, the thugs got something right! 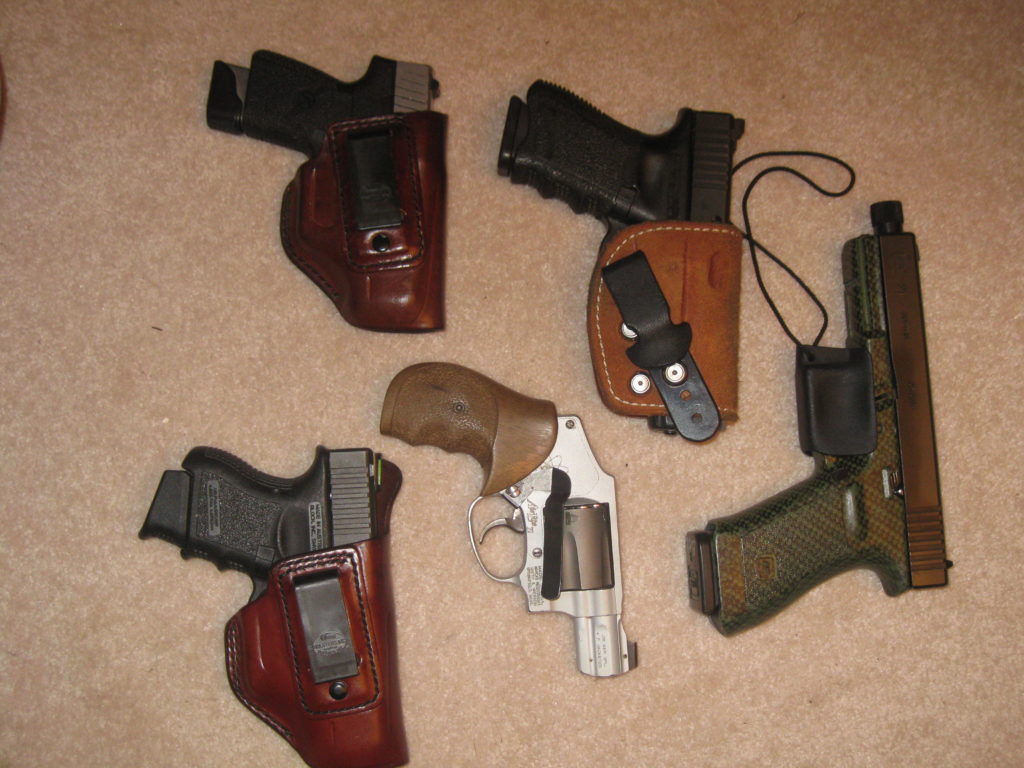 Some of the appendix holsters that I’ve used.