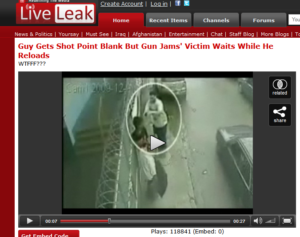 I’ve written quite a bit about malfunctioning guns over the years.   I published Criminals and the Guns They Carry.  That article was a study of all the unloaded broken and malfunctioning guns police take from criminals.   A couple weeks later I wrote Weapon Malfunctions in the Active Shooter Environment about how commonly killers’ guns jam when they are engaged in a shooting spree.

I guess I’m not quite done done with gun jams for awhile.

I saw a Facebook post from friend and fellow instructor Chris Fry at Modern Defensive Training Systems.  Chris posted a video of a unique shooting that happened in Brazil.  Surveillance footage showed an attack on a street.  The attacker walked within three feet of his intended victim and fired a shot, which missed.  The shooter’s gun jammed and the victim just stood casually without moving as the shooter cleared the malfunction and fired another shot.  His gun jammed again, but since he had hit his intended target with the second round, he didn’t bother to clear the jam before walking away.

Check out the short video at the link below.  You will see a man getting shot and falling to the ground.  You won’t see blood and gore.  The website also hosts videos of a violent or adult nature, so please don’t go there if such behavior is prohibited by your employer.  You’ve been warned.  Now, go check out the link….

What would cause a person to completely freeze up and do nothing while within contact distance of an armed attacker?  The shooter took approximately five seconds to clear the jam and fire the second shot.  The victim could have done anything, but he chose not to.  Why?

I believe the victim froze because his sensory system was so overwhelmed with data that he couldn’t process it all.  He had never imagined such a thing happening to him, so he had no plan to deal with the event.  Without a plan of action, the victim was locked into the circle of observing his opponent’s actions, trying to figure out the significance of those action and coming up with an appropriate plan (for those of you familiar with the OODA loop espoused by Col. John Boyd, the victim was bouncing between Observe and Orient without ever getting to Decide or Act).  He never reached the point where his brain constructed a logical response.  His brain was just bouncing back and forth trying to process information.  The “bouncing brain” manifested in a freezing body, leading to his gunshot wound.

Unfortunately, that happens very frequently with crime victims who haven’t studied the art of violence.  The only way to avoid freezing in a spot like this is to have a plan of action BEFORE the event actually occurs.  That makes the Decide portion of the OODA loop very simple.  The decision has already been made.  All you have to do is Act.

I can’t tell you exactly what you should do.  Every person has differing skills, abilities, and motivations.  You must decide the best course of action for yourself.

You must make this decision by analyzing all possible responses and figuring out which will work best for you.  In any criminal attack, you have several options.  Look through all the possibilities and see which makes the most sense to you:

4) Negotiate- Try to talk your way out of it

– Pretend to be sick or have a heart attack

– Say something like “You can’t shoot me.  You know my boys got my back right now.”

6). Freeze– the conscious or unconscious decision to do nothing

You will likely resonate with one or more of these tactics.  Likewise, you will certainly find some ridiculous.  I’m not in a place where I can tell you what’s right for you or judge your actions.  the only thing I can tell you is that based on my experience, freezing yields the worst outcomes.  You can see that happen in the video.  Doing ANYTHING except freezing would be a better choice.

Unfortunately, freezing will be your brain’s default choice unless you find a better solution.  Do your homework.  What is your choice of action?