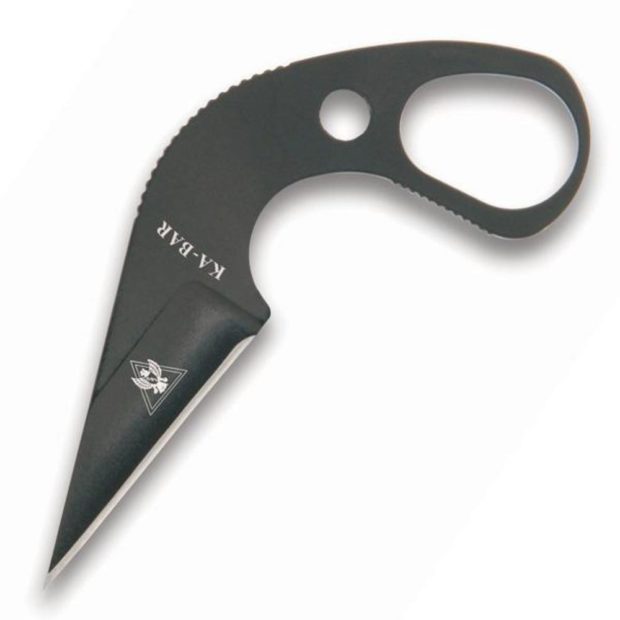 Many of you are aware that I designed the Ka-Bar TDI Last Ditch Knife.  I recently received a question from a reader about some design features:

“Greg: I noticed you mentioned you designed the Last Ditch blade for Kabar. I would be interested in an article about the design and how it works, and how it is meant to be grasped. I actually bought one, but could not get my mind around how it is to be wielded and it has ended up sitting on my closet shelf for a couple years.”

I designed it primarily as a knife that could easily be missed on a cursory search if one was taken hostage. I had been traveling through South America a lot and was worried about kidnapping attempts. There just weren’t any really good knives on the market that could be easily hidden.

My initial thought was that I wanted something no larger than a credit card, so that I could carry it in a wallet if I wanted to. If I did that, it had to be exceptionally thin as well.

I wanted a blade design that would do a lot of damage for its small size. That’s why I designed it with the straight edge and very sharp point. It isn’t designed as a general purpose cutting tool. It’s designed to cut flesh like a bigger knife.  It essentially duplicates a #11 scalpel blade, a tool expressly designed to cut flesh as efficiently as possible.

After I designed the knife, I wanted a sheath that could be hidden anywhere. I put multiple holes in it so that it can be laced in a boot or safety-pinned inside a piece of clothing.  I originally carried mine safety pinned inside and below the rear waistband of my pants when I travel in third world countries. That way I could cut myself free if my hands were tied or taped behind my back.  I also carry one in my wallet.

I have since modified the carry mechanism slightly by attaching a small keyring.  I loop the keyring around my rear pants belt loop at the small of my back and tuck the knife down inside my waistband.  I have also attached a small handcuff key and handcuff shim from OscarDelta to the same keyring.  Now, no matter how I may be restrained, I have a reliable option for escape. 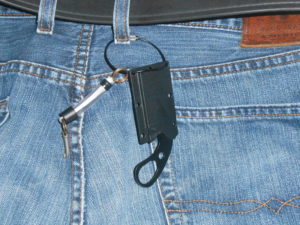 LDK knife attached to keyring and belt loop. The knife is then pushed inside the waistband of the pants and is easily missed on a casual search.

The hole in the handle is not designed for a finger. Many people try to grip it by curling a finger through the hole. It doesn’t work that well. I put the hole in the handle to save weight and provide an extra means to draw it. If the sheath is flat against a hard surface (like laced in a boot), it is difficult to get a full hand grip on the handle to draw. The hole allows you to catch a single finger inside to pull it from the sheath in order to transition to a better grip. 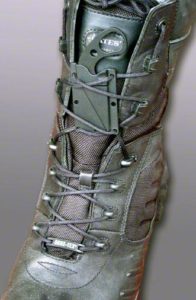 LDK knife laced into boot. The hole in the handle allows a one-finger draw when it is laced flat like this and a proper grip can’t be obtained.

The proper grip to hold the LDK for fighting purposes is very similar to the way one would hold the original Ka-Bar TDI Law Enforcement knife.  It is held protruding from the fist so that it penetrates during a punch.  See the photo below. 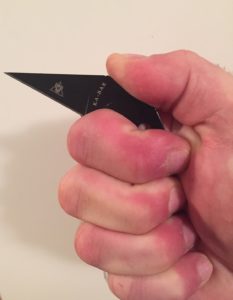 Proper grip on the LDK

That’s about it. I sent in the design in 2006 and it went into production in 2007. It has been consistently in Ka-Bar’s top three sellers since then. Right now they are selling about 1000 a month and demand has remained steady over the years.

The knife can be purchased wherever Ka-Bar knives or sold.  It is also available on Amazon.com.