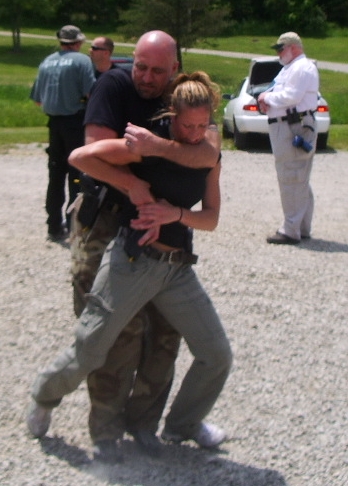 Have you ever thought about how you would rescue a friend, partner, or loved one who was engaged in a life or death struggle with a criminal?

It may be a little more complex than you have imagined.

Awhile back a concealed carry permit holder named Perry Stevens in Louisiana heroically took up the role as rescuer when a police officer needed some assistance.

You can read about his story at the link below.

The officer was attacked by a man to whom he had just issued a citation.  The man knocked the officer to the ground and was on top of him, beating the officer with his fists.  The officer could not escape and, recognizing he was at risk of serious injury, he shot his assailant one time in the torso.  The gunshot had no effect and the assailant continued to assault the officer.

By that time, Mr. Stevens (who was shopping nearby) noticed the altercation and went to his truck to obtain his legally-carried pistol.  Mr. Stevens pointed the gun at the man on top of the officer and warned him to stop.  The attacker ignored the warnings and Mr. Stevens fired four shots with his .45 pistol into the attacker’s torso.

The four gunshots had no effect on the man who was still beating the officer.  Mr. Stevens gave an additional verbal command, closed the distance and fired one more shot.  That shot hit the assailant in the head, killing him instantly and ending the assault on the officer.

Mr. Stevens performed exceptionally well.  Five shots.  Five hits.  All against a moving target with an innocent person in very close proximity.  Would you have done as well? 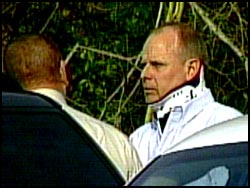 The hero of the story

We see this type of “partner rescue” scenario in police shootings with some regularity.  Usually they don’t turn out quite as well as this one.  The victim officer is often mistakenly shot by the rescuing officer.

Even if you aren’t a police officer, you should be prepared to handle this type of event.  The victim that you rescue might be a spouse or a family member.  Husbands have rescued wives by shooting men in the process of committing a rape.  Wives and girlfriends have shot criminals who are beating or stabbing a loved one.  Parents have shot criminals attempting to molest or kidnap children. All of these shootings happen under frenzied conditions with innocent victims very close to the criminal attacker. 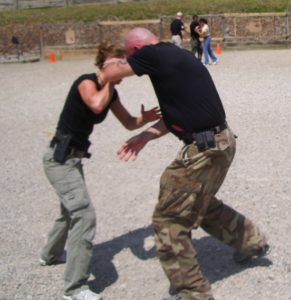 Have you ever trained to rescue a loved one in a position like this? 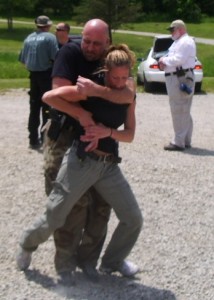 You can’t just stand at a safe distance and take the shot. In a rapidly moving attack, your loved one could end up in this position in a matter of a few seconds.

Here are some guidelines to follow in case you are ever forced to rescue a partner or loved one from a lethal force threat at very close range:

1)      Get close enough that you can guarantee your hit.  Too many potential rescuers begin firing as soon as they become aware of the problem.  In the incredibly dynamic nature of a close range lethal force attack, both the criminal and his victim will likely be moving.  Taking a long range shot is a recipe for disaster.  Move in close enough to make sure your shot hits the bad guy and not your loved one.

2)      Assure a clear entrance.  Make sure no part of your (or your partner’s) body is between the muzzle and the attacker you intend to shoot.  This seems like common sense, but it is actually fairly easy to shoot a hand or arm that is pushing, grabbing, or striking the attacker.

3)      Consider non-traditional targets.  In a close quarters gunfight, traditional targets like the center of the chest or head may not be available.  Shots to the armpit, neck, or pelvis are likely to be effective and may be faster than waiting for an opportunity to take the traditional “center mass” shot. 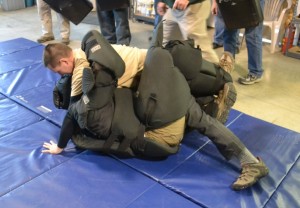 If you had to rescue the person on top in this situation, where would you shoot? A traditional center mass shot on the bad guy (on bottom) wouldn’t be available.

4)      Do as much as possible to assure a safe exit.  Most modern defensive hollowpoint ammunition will not exit the torso of the criminal you shoot, but rounds do occasionally pass through the intended target.  Make sure the victim you are rescuing isn’t directly in the path of a potentially exiting bullet.

This is harder than you might think.  Bullets don’t always take straight paths through the body.  Sometimes they hit objects like belt buckles or items in pockets and are deflected.  Sometimes their path is altered when they strike a bone.  Although it isn’t an exact science, bullets will generally track in a fairly straight line through the attacker.

Imagine the scenario discussed above.  If Mr. Stevens was shooting at an attacker who was straddling the officer, shooting the attacker in the back might not be the best move.  If the bullets passed through the attacker, they would hit the officer on the ground.  A better option would be to shoot from the side (aiming for the straddling attacker’s armpit area) so that if the bullet exits the body it wouldn’t hit the victim you are trying to protect.

Also make sure that your other hand is not on the far side of the attacker’s body where the bullet might exit.  I know of a police officer who grabbed a close range attacker’s hair to facilitate a better head shot.  He pulled downward on the attacker’s hair and shot the man under the chin.  The exiting .40 bullet blew off part of the officer’s thumb.  The officer won the fight, but I bet that he would have rather taken an additional millisecond before shooting to ensure than all of his body parts were clear of the bullet’s most likely trajectory.

5)      Keep the muzzle at least two inches away from the attacker’s body when you shoot.  Having taught close quarters shooting techniques to thousands of students over the last 15 years, I’ve noticed a predictable pattern in the “partner rescue” scenarios I conduct…

The rescuing person tends to jam the muzzle of the gun into the attacker’s body to facilitate an assured shot.  There is some primal instinct in play here as almost every student I have ever taught has done a similar thing. 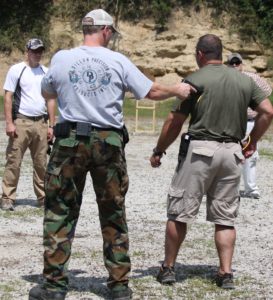 Avoid the urge to jam the muzzle into the attacker’s body during your rescue attempt.

With an autopistol, jamming the muzzle into an attacker may activate the “out of battery” safety mechanism.  The gun is designed so that it can’t be fired if the slide is pulled back and the live cartridge isn’t fully supported by the chamber.  With some guns, it only takes ¼ inch of slide movement to deactivate the trigger!

Try this:  With an UNLOADED (and triple-checked) auto pistol, press the muzzle into your own hand hard and try to pull the trigger.  You will find that it won’t work with most modern semi-automatic pistols.  If doing this with an unloaded and triple checked pistol still makes you squeamish, you can accomplish the same goal by using a training barrel or pushing the muzzle into something like a mattress or firm pillow instead. 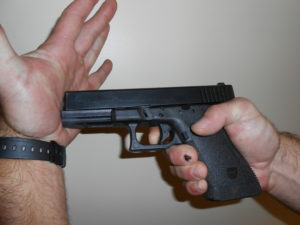 Keeping your muzzle at least two inches from the attacker will ensure that the slide stays in battery and that blood and tissue doesn’t blow back into your pistol’s action to cause a malfunction.

The partner rescue scenario is far more complex than most people consider.  Find a good training partner and practice some of these techniques.  Better yet, seek out some professional training.  Active Response Training conducts regular training classes that cover close quarters shooting tactics and partner rescues.  Use the “contact” link on the homepage if you have a range and would like to host one of our classes!