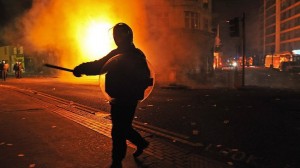 The midterm elections will take place in less than two weeks.

There is constant low-level internet chatter about rioting, looting, and mayhem being planned by different groups depending on which political party wins most of the races.   I’m not an alarmist, but I think it’s prudent to be prepared for any eventuality.  Here’s a list of things to think about if you get caught up in a riot or post-election protesting mob.

I’ve read some articles by various “tactical gurus” advising that if people get caught up in a riot or confronted by looters, they should start cutting throats and shooting everyone in the face with their 9mm pistols to facilitate escape.  There’s certainly a time and place for such actions, but if you are smart, it will never come down to that.  Let me share some of my experiences.

In addition to having dealt with some pretty unruly crowds at work, I’ve been caught up in a few riots during my third world travels.  In Brazil, I was tear gassed by the police because I was in the middle of a huge fight and riot that broke out after a 600,000 person concert on the beach.  In Peru I was even stuck in a riot where one of the rioters (a striking transportation worker) was shot by the military.  There were others as well.  I’ve seen some pretty crazy crowds.

In each one of those bad spots, it was relatively easy to escape without having to resort to using violence myself.  If a person uses some common sense and keeps a good situational awareness, he or she can usually get away from most riots or protests before things get too bad.

The first piece of advice I can give you is to pay attention to your surroundings and have an escape plan everywhere you go.  When you see things starting to go bad (massing police, masked looters, violent behavior, or people setting fires) GET OUT!  Implement your escape plan.  Don’t stick around and become a target for police batons, gangs of teen looters, or panicked crowds.  Usually the people who get hurt or killed in these events are the people who aren’t paying attention or who want to stand around and be a spectator.

If, despite your best efforts to avoid problem areas, you find yourself surrounded by a  mob or overtaken by a riot, quickly get your back to a wall.  That way you won’t be surrounded and will only have to deal with a few people at a time.  I’ve found this tactic works very well.  If you fade back to a wall and stop moving, often the crowd will ignore you and pass right by.

Once you get your back to a wall, organize yourself and plan your escape.  If you are wearing a backpack, bag, or purse, swing it around to the front side of your body where it can serve as a shield (a panel from an old ballistic vest carried in the back pocket of your backpack will give you even more comfort).  This also prevents thieves and looters from trying to take it from you.

Then take a look at the crowd.  Look for gaps.  Your goal is to look far enough ahead and move from gap to gap, exploiting the openings in the crowd.  Holding both arms in front of you with your hands together in a wedge shape will help get you through the swarming people.  Move along walls if you can with your “wedge” out in front of you, deflecting people off to the side.  Turning your shoulders will also help.  If you are a larger or taller male the “swim” and “knife” technique you used on the defensive line playing football can also be used with great effect.

Having some sort of less lethal weaponry will help.  Many of the criminals who are caught up in the spirit of the riot are not very dedicated or motivated.  A quick blast of pepper spray will usually make them look for easier targets.

If you are attacked and you don’t have any spray (or the spray doesn’t work), you must act decisively.  Don’t get caught in the middle of two or more attackers.  If possible, keep moving to the outside of the group of attackers to “stack” them, or line them up so you only have to fight one at a time.  If you do get surrounded, violently attack one of the gang and either use him as a temporary shield or blast through him to make your escape.  Don’t just blindly run away; you may be running into an area where there are more problems.  Instead of running AWAY from the criminals, run TOWARD safety.  And remember that “safety” in this case may not be the band of police in their riot gear with batons out and ready.

The knife might actually be the better tactical choice as it is harder to take away from you, won’t miss or over penetrate and hit others in the crowd, and won’t cause even more chaos in the already panicked mass of people.  If you do choose to use a firearm, be very careful.  It’s easy to lose a gun in a crowd.  Learn how to make an inconspicuous draw, conceal your weapon in hand, and shoot from the retention position.

Also beware that the police may have posted snipers who could shoot you if they see you have a gun.  As bad as it may sound, police often won’t differentiate between a criminal and a legally armed citizen trying to protect himself in a situation like this.  Everyone who is in the riot is thought of as a criminal.  “Criminals” shooting guns get shot by the police. 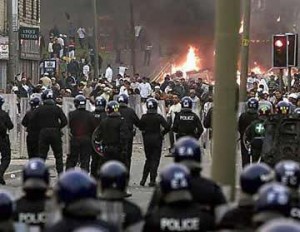 If you are in your car and are surrounded by rioting criminals, KEEP MOVING!  Don’t stop and allow them to open your doors or break your windows to drag you out.  I wouldn’t intentionally run someone over (unless that person posed a lethal threat to me), but I wouldn’t stop either.  Pick a route (over the curb if necessary) and slowly drive through the crowd.  Your car will likely be damaged, but you will be out of the mess soon.

Know more than  one route to and from any place you commonly drive.  Flexibility in these situations is paramount.  Keep your situational awareness up and be prepared to alter your route if you encounter throngs of people or roadblocks.

In addition to your everyday carry items like a firearm, spare magazine, and knife, there are a few other easily carried items that may help you if you find yourself in a riot or mob:

–          Pepper Spray– As I previously wrote, this may be a lifesaver.  If you can deter a criminal attack without having to use your gun, you will be much better off both tactically and legally.  A small can of pepper spray (I recommend Sabre Red in stream formulation) should be carried on your person or in your car.  I keep a can in my car and throw it in my pocket whenever I am going someplace where I might encounter a large crowd of people.

–          A bandanna or triangular bandage- Besides its obvious use as a piece of multipurpose medical equipment, a wet bandanna can be tied or held over your nose or mouth to temporarily protect you from tear gas.  I prefer holding the bandanna rather than tying it over my mouth and nose.  A bandanna tied over one’s face screams “criminal” to the police.  I would rather not be a target for baton blows or rubber bullets if I am mistaken for a criminal.  Holding the bandanna makes you look like a victim, not an attacker.

–          Spare contact lenses if you wear them– Tear gas will destroy your soft contacts…trust me.  You will never want to put them back in again if you get exposed.  If you need your lenses to see, carry a spare pair.

–          Protective glasses or sunglasses– When the police start firing beanbag rounds, Stingball grenades and rubber bullets, you will want your eyes protected.  Those rounds hurt if they hit skin. If they hit your eyes, you can be seriously injured.

–          Sturdy running shoes or boots– People who walk around in large crowds while wearing flip flops amaze me.  If bad stuff happens they aren’t able to run and their feet will likely be trampled by those who were smart enough to wear real shoes.  Be smart.  Save the flip flops for the beach.

–          A flashlight- if you are out at night in a crowd, you should have a light.  Besides its regular uses, a stout flashlight can be an improvised impact weapon.  If the riot occurs at night, you will want the light to check out any unlit alleys or other areas you might be considering for escape or refuge.

You should be prepared to deal with cuts from thrown debris, tear gas exposure, and sprained or fractured ankles occurring to both yourself and to others.  The cuts should be thoroughly cleaned and bandaged, but you may be able to wait until you get to safety to do this.  Don’t stand around in the middle of a riot putting a band aid on your minor cut.

The sprains are generally treated with rest, ice, compression, and elevation.  None of those are possible in the middle of a riot.  Wrap the ankle with duct tape or your bandanna, find something or someone to lean on and get yourself out.  Having a couple of strong analgesic pain pills (strong enough to dull fracture pain, but not so strong that they make you loopy) in your pocket may be helpful additions to the equipment list above.

If you get exposed to tear gas or pepper spray, don’t panic.  All the effects will diminish on their own without treatment in less than an hour.  The definitive treatment for the spray exposure is fresh air and cold running water.  Find a garden hose, shower or sink and flush your eyes and skin for five to ten minutes.  After that, most of the effects will be gone.

If you don’t have access to running water, take a plastic water bottle and poke a small hole in the lid.  Squeeze the sides of the bottle to create a stream of water coming out the hole.  Direct the stream into the affected eye or eyes.  If there is an open store nearby, purchase a cheap bottle of contact lens saline solution to do the same thing.  If no water is available, open and close your eyes as hard and fast as possible to get the tears flowing.  This will hurt initially, but will speed up the decontamination process.

Please don’t ignore this advice.  You don’t have to be a third world adventure traveler to be caught in a riot. With our current unstable political climate, the third-world might be coming here. 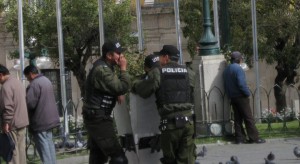 Riot police standing by in a Santa Cruz Bolivia town square. There were no problems that day, but the cops were ready just in case.