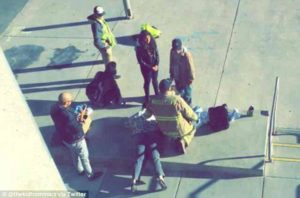 Last week, a student at The University of California at Merced entered a classroom and began stabbing another student.

A construction worker who was working nearby heard the commotion and interrupted the attack by kicking the knife wielding attacker.  The construction worker was stabbed himself before the suspect fled.  While fleeing, the student stabbed two more people in the stairwell of the classroom building.

When confronted by police, the student lunged at an officer with the knife.  The officer shot him dead.  The coroner found a two- page “manifesto” in the student’s pocket, describing his planned actions for the day.

If you would like some more information about the incident, this article provides a good overview.  Let’s take a look at some of the lessons learned from this attack and how we might better respond to other similar acts in the future:

1) Detailed Planning.  One of the hallmarks of most school violence is the presence of very detailed planning on the part of the attacker.  These events are rarely caused when a student “just snaps.”  They are planned days, weeks, or months in advance.  The manifesto in this case proved that fact.  This wasn’t an angry student lashing out after being thrown out of a study group.  This was a serious attack that had been extensively (if poorly) planned in advance.

This is where we as family members, friends, co-workers, teachers, and fellow students need to be alert.  The planning process takes time.  It is also the only way we can “interdict” the attacker before he commits the crime.  If someone had noticed the detailed planning this student was engaged in, there might have been an opportunity to stop him before he started stabbing people.  Be alert for interdiction opportunities like this and don’t be afraid to call the police if you believe someone is planning an act of terrorism or school violence.

2)  The attacker had plans to restrain hostages, slow responding officers, and acquire better weapons from responding cops.  According to this article:

“According to the manifesto, the plan included binding students to their desks with zip-tie handcuffs, after which Mohammad was going to make a fake 911 distress call, ambush responding officers with a hunting knife, steal their guns, and shoot a list of targeted classmates, including those in his study group.”

These few sentences give us quite a bit of guidance for responding to these types of incidents in the future.  Some questions to ask yourself:

3) Explosives?  According to this article, the suspect “..had been carrying two plastic baggies of highly flammable petroleum jelly….He intended to squirt the petroleum jelly on the floor to create a slippery surface for anyone entering the classroom.”

We don’t know if this plan was listed in the manifesto or if it was the assumption of police officers who found the petroleum jelly.  We do know that the bomb squad responded and blew up a couple items in the suspect’s back pack.  From the same article:

“Kristen Halliday, a UC Merced freshman, told the station that she and a group of friends were trapped in their dorm room above the scene and saw the bomb squad arrive.

‘They did detonate something. We heard the sirens and then they said: “Fire in the hole”, and then it detonated.’

My guess is that these weren’t bags of petroleum jelly to spread on the floor.  If slowing responders was the subject’s goal, there are lots of other substances that would prove to be more slippery and easier to spread onto the floor.  My guess is that the shooter had created “poor man’s C-4” an explosive created by mixing potassium chlorate and Vaseline.  The presence of explosive devices is consistent with other recent school attacks.

In one of the bomb training classes I attended, we mixed up some potassium chlorate and Vaseline.  Take a look at the video below to see what a half pound of this mixture can do.  After seeing this, you may understand why the shooter would carry around a couple of “baggies of highly flammable petroleum jelly.”

4) Effective resistance stopped the attack.  When the construction worker entered the classroom and began fighting the attacker, it changed the attacker’s plans.  According to the sheriff:

“His plan went haywire because people fought back,” Warnke said Thursday night. “He got so befuddled at the activities that happened; it took the script away from him.”

Effective resistance is the key to stopping active killer attacks.  And just like in this situation, effective resistance usually causes the attacker to disengage and flee or to kill himself.  Remember this fact.  Fight back at the first opportunity where the odds are in your favor.  You’ll be surprised at how often sheer aggressive resistance will run an attacker off.

One thing I like to do when I see news articles about attacks like this one is to “war game” how the standard “active shooter response plan” would fare against a similar attack.  Most schools have a very basic plan to address school violence.  That plan can be quickly summarized as “lock down and wait for the police.”

The problem with basic response plans is that they don’t take into account the many contingencies and differing attack strategies the killers use.  If a lockdown was somehow triggered at the start of this event, how would the students have fared?  Not so great, I’m afraid.  If the attacker is already inside the classroom, a lockdown isn’t going to protect the students who are being attacked.

If anything a lockdown in this situation would create more victims, as students would be required to stay put in the classroom where the killer was conducting his attack rather than fleeing or fighting like they should.  Turning out the lights, locking the door, and hiding under desks wouldn’t be an effective strategy for the classroom under attack.

What about the other classrooms in the building?  Against a solo attacker who is only armed with a knife, locking down might be useful to delay his access to additional victims.  The overall effectiveness would depend on the speed of police response and entry.

Did you read in the article that the student had basic breaching tools (hammers) in his backpack?  How do you think he was planning to use those?  My guess would be that he was planning to use the tools to breach any classroom doors that happened to be secured if a lockdown  had been triggered.  Given enough time, he probably had the ability to breach whatever door he wanted.  Again, in this case, lockdown probably would have been a poor response choice.

I’m not demonizing the lockdown process.  It has saved lives in past incidents.  It isn’t automatically a bad choice.  In fact, it’s often a good choice.  But it isn’t ALWAYS a good choice.

This incident highlights that fact.  Teachers should be given the authority to alter basic response plans if necessary.  In my experience, most teachers are not allowed to do this.  That’s a huge problem with the “lockdown and wait” mentality.  Sometimes that doesn’t work.  Teachers need to be trained how to recognize when locking down is a bad plan and be given the authority to alter it on a classroom by classroom basis.  That isn’t happening in most schools right now.

A lot of folks are getting spun up about the attacker’s supposed ties to Islamic Terrorism.  He mentioned several times in his manifesto that he planned to “praise Allah” after each stage of his attack was finished.  He wrote about cutting off people’s heads.  Other students claimed he was smiling as he attacked.  Both of these strategies are mentioned in Islamic literature.

The kid was clearly a follower of Islam.  He might have been inspired by fundamental ideology.  Or he could have just been a mentally ill kid.  I would bet on the latter.  Take a look at the pictures of the attacker.  Doesn’t he look a bit “off?”  I doubt this was a planned Islamic terrorist attack against an apostate target.  I think it was the work of a lone crazy kid who was trying to garner attention by “affiliating” himself with the “big boys” of Islamic Terrorism (ISIS and the like).

It really makes no difference.  Whatever the attacker’s motivation, be it either religious ideology or sheer lunacy, it doesn’t change your response strategy!  That’s the important thing here.  While many of you are spouting off on Facebook about the need to “do something” about the spread of fundamentalist Islam in this country, attacks like this are happening on a daily basis.

I think you could spend your time and energy in a much more productive manner if you concentrate on planning your individual response tactics and teaching your friends and family members how to prevail against a similar attack.  Save the motivation discussions to the psychologists and “talking heads” of the media and politics.  The attacker’s motivation doesn’t matter much when you are at the pointy end of his knife.  Stop arguing about stuff you can’t control and concentrate your efforts on developing strategies that will keep you and your loved ones safe.