* This is a guest post from my friend Ed Monk.  Ed has done the math on this problem and is one of the world’s leading authorities on active killers.

The faster we can stop the killer, the fewer bodies we will have. Read his post below for the exact mathematical details.

I highly recommend Ed as a trainer.  I’ve attended several of his lectures at the Rangemaster Tactical Conference and will be attending his Active Shooter Instructor class as a paying student in October.  You can see his training schedule at the Last Resort Firearms Training Page on Facebook. 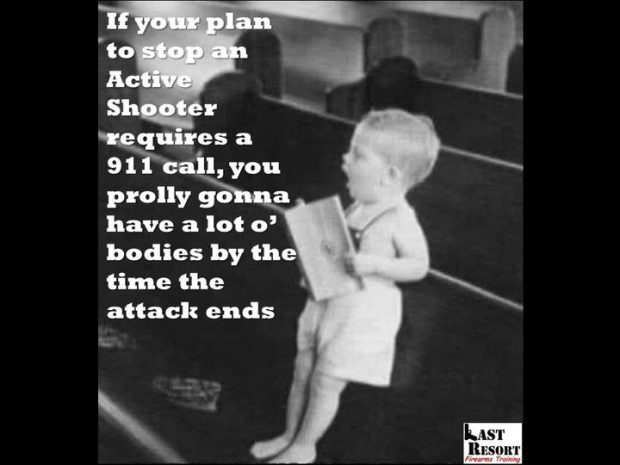 Lowering victim count at Active Shooter attacks is not about emotion or politics. It’s about simple TIME & MATH. Unfortunately, emotion and politics will distract most Americans and most leaders from doing the simple mathematical analysis needed to understand the problem, then use that understanding to craft response plans that will minimize victim counts.

Historical data shows us that if we let the killer shoot people for 1 minute before we stop him, we can expect 8-16 victims.

If we let him shoot people for 2 minutes, we should expect 14-22 victims.

If we let him shoot people for 3 minutes, we should expect 18-26 victims.

If we let him shoot people for 5 minutes, which we do FAR too often, we should expect around 30 victims.

Simple math shows us that the quicker we stop the killer after he starts his attack, the lower the victim count will be.

If we rely on a 911 call to stop an Active Shooter, we are almost guaranteed a double-digit victim count, because historical data shows us that the killer will have shot 10 or more people before the first 911 call is made.

That 911 call will generate a police radio dispatch and police travel to the attack location, which will likely take enough time for another 10+ victims to be shot, bringing the victim total past 20.

So, the only way to have a realistic chance of an attack ending in a single-digit victim count is for someone who is already at the attack location when it starts to act aggressively (FIGHT) to end the attack in the first minute, preferably in the first 30 seconds.

We must change organizational response plans from passive (hunker down and wait for someone to arrive and save us) to active (ACT to stop it now). But it’s not enough to type an “active” plan on a piece of paper and call it a policy. This active plan must be trained, wargamed, practiced, and resourced. To paraphrase Henry Ford, “If we keep doing what we’ve always done (call 911), we will continue to get what we’ve always got (high victim count).” If you would like assistance in improving your organization’s plan to minimize victim count, contact me.

For more details about Ed’s incredible research, watch the linked videos below.  The first three videos are a condensed version of Ed’s Active Killer presentation.  The final two are an active killer discussion between Ed and Tim Larkin.  It’s well worth your time to watch.