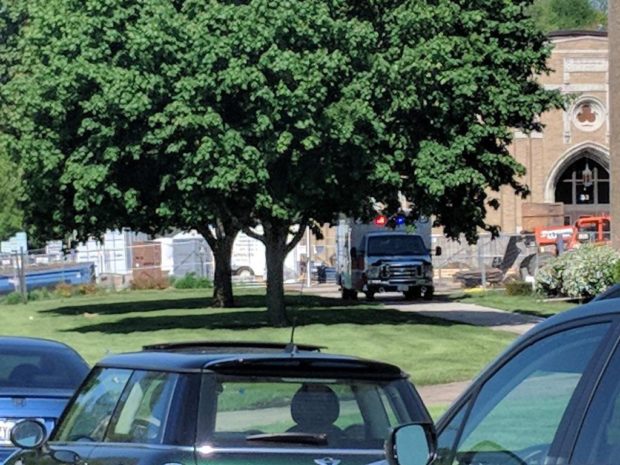 This shooting happened yesterday, but we are just now seeing the news reports about it.  The reports (like most early news reports) are both conflicting and short on details.  It seems that an expelled former student targeted  his high school’s graduation practice session.  He shot at a school resource officer.  The SRO returned fire and wounded the would-be killer.  No one else was hit by the gunfire.

One news source stated that the gunfire happened in the gym.  One says that it occurred outside when the cop confronted the shooter.  Check out the following link for details.

I think this one will fade quickly from the news media’s notice.  No one was killed.  Cop did what he was supposed to do.  Bad guy in custody.  A lack of media attention doesn’t mean a lack of valuable lessons to learn from this event.

I feel like a broken record saying the same things over and over again when I comment on school shootings.  Clearly, the right people aren’t paying attention.

First note the time and the location of the shooting.  As per the latest trends, it occurred early in the morning and in a large public area.  School shootings are not starting in classrooms like they once did.  After 15 years of constant post-Columbine practice, most schools have mastered the art of locking down individual classrooms during a school shooting.  This may not be the best overall strategy, but it is the one most schools have adopted.  In fact, it is the single technique most schools rely upon.  Most schools don’t have a backup plan if lockdown fails.

That’s why most of the recent shooters have chosen to start their attacks before or after school when students are not organized and in classrooms.  They are starting their attacks outside the school, in hallways, and in common areas where students amass.

How effective do you think a lockdown would be in a gymnasium full of people when the killer WAS ALREADY INSIDE THE ROOM?  It’s useless.  That’s why killers like this kid choose to initiate their attacks in those locations.

Most schools don’t have plans for flight or evacuation.  Most schools have the sole response of locking down as when the shooting starts.  That’s completely inadequate and the killers are figuring out how to stack bodies despite the schools’ efforts to lock down.  Make sure your children’s schools have plans to evacuate as well as lock down.  Locking down in a room without cover (that the killer has already penetrated) is nothing but gathering up all the fish and placing them in a convenient barrel for the killer.

It’s unclear what initiated the attack.  One report states that he shot at the school resource officer.  One report states that he began by firing rounds outside the gym.  We don’t know for sure what the gunman was trying to do, but there is a good chance that he was trying to kill the school resource officer to initiate his attack.

As I’ve said in several past articles, these killers are making plans to take out any security or police officers on scene as the opening act of their massacres. Getting rid of the immediate resistance ensures a clear path to a large body count.

Most school resource officers are blissfully unaware of this fact and do very little to prevent their own deaths.  A lot of SROs are chosen because of their “nice” personality.  Many are not tactically proficient.  In fact, the SRO position in some departments is a dumping ground for officers too incompetent to work the street.

School security staff should be completely unpredictable in their movement patterns to avoid being targeted.  Having plain clothes security staff is even better.  If the students don’t know who is carrying a weapon, they can’t effectively target that person during an attack.

I’m happy that the SRO did a fine job engaging the shooter.  I’m happy no one but the bad guy was injured.

And finally, make sure your child’s school has an SRO who can take care of business rather than someone like the disgraceful deputy in the recent Broward county school shooting.  “Officer Friendly” is nice.  “Officer Competent” is better.