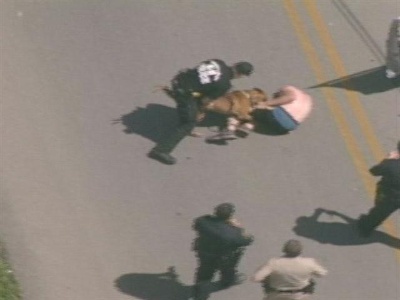 Place yourself in Carolyn Meadows’ shoes.  It’s mid day and you are leaving a large grocery store.  You get into your car and start to back out of the parking space only to be startled by a shirtless man yelling and banging on the rear of your car.

The man is blocking the car from completely leaving the parking space and if she accelerated, she would hit the man.  What would you have done if you were in her position?

Victim of carjacking speaks to WLKY 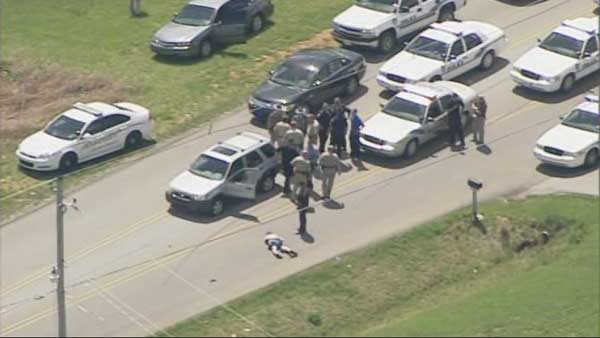 The shirtless carjacker was eventually caught by police

Take a look at the denial and rationalization process the victim used.  According to the story, she said:

“I thought maybe I’d hit him or ran over his dog. I didn’t know why he was so upset”

She never even considered that this could be a criminal attack.

The brain works is a very predictable fashion.  When it encounters stimuli or information that it cannot immediately make sense of, it looks to relate the new information to some past experience for easier classification.

If you’ve never been the victim of this type of crime before or have never studied criminal attacks, your brain will attempt to lump this new situation into something it can easily understand by relating it to something in the past that the brain recognizes.

Notice how she said she thought she might have hit his dog.  What a strange response.  How many dogs are running around a grocery store parking lot?  I’d bet money that she or a family member had run over someone’s dog in the past.  The brain just associated the current events with something similar that occurred previously and lumped the two together.

She made the mistake of opening her window to see what he wanted.  He wanted her car.   He drug her through the open window, dumped her on the ground and took off in her vehicle as she sat there amazed.

Since most of you aren’t regular victims of criminal violence, how do you train your brain to recognize an attack for what it is and not subconsciously associate it with an innocuous past event in your life?  There are two ways.  One is relatively simple and one is more difficult.

The first way is to study news articles like the ones I post here and really think about each situation.  Mentally place yourself into the position of the victim, seeing, hearing, smelling, and feeling exactly what she is.  The more vivid you can set the scene in your brain, the more firmly you will anchor the thought.

The brain doesn’t categorize real events any differently than thoughts.  By thinking deeply about a criminal attack, the brain encodes that information as a past experience and can call on it to recognize something similar that happens in the future.  I bet that you have developed this connection just by reading the article thus far.  If someone bangs on your car as you are backing out of a parking space, you will now be thinking “carjacking” rather than “I ran over his dog“.

It’s also important to branch from each scenario.  Start thinking about other reactions that your attacker might have and how to deal with them.  Think about alternate scenarios.  Ms. Meadows did that here when she said:

Think about possibilities like that.  What if your kids are in the car?  How about your spouse?  What if there were two attackers?  What if they had guns?  The more information you think about now, the easier it will be for you to act if a similar scenario is presented to you in the future.

The second method involves force on force training with scripted role players.  This will allow you to get more “experiences” to categorize in your brain.  Besides that, you will get feedback on which actions you can take that are positive and which place you in additional danger.  You can practice until you get your desired response perfected.

This approach obviously takes more time and energy, but it is a vital part of advanced training and its value can’t be discounted.  Many shooting schools are now offering force on force training for their advanced students.  It would be wise to seek out such an experience.

It doesn’t cost anything to think.  Instead of mindlessly watching the news or surfing the net, think about what you would do in the criminal attack you see or read about.  Plan a response.  Then, when you are attacked, you won’t be thinking “I must have run over his dog.”