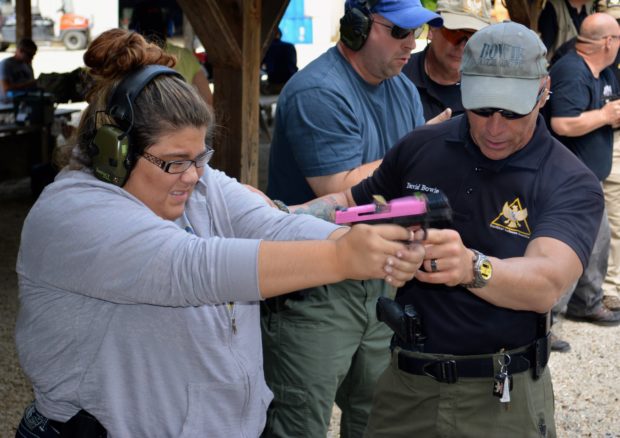 I’ve known for a long time that the words we use when coaching a shooting student can affect how quickly that student grasps a certain concept.

One important concept I’ve used over the years is to express all of my coaching cues as positive statements.  If you use negative statements, the brain doesn’t process them well and will often focus on the very habit you are trying to eliminate.  An example of this is when a coach says “Don’t jerk the trigger.”  The brain tends to focus on the last part of that statement (“jerk the trigger”) and negate the negative.  The student is programmed to think about jerking the trigger and the problem gets worse.

It’s kind of like what would happen if I told you: “Don’t think of a pink elephant.”  What’s the first thing you did?  You thought of that elephant.  The brain doesn’t handle negatives very well.  It’s  better to express your cues in a positive manner, saying something like “Squeeze the trigger gently” instead.

I once read a strength training article called  How a Simple Mind Trick Can Make You Stronger in Seconds.   In the article, Armi Legge summarizes some research about how using different verbal cues for weight lifters can lead to better performance.  The research indicates that using external cues creates better performance than by using internal cues.

According to the article (using strength training references):

“An internal focus of attention means you’re thinking about your body movements. Your legs when squatting, your arms when doing chin-ups, your chest when benching, etc.

An external focus means you’re focusing on something in your environment that’s relevant to your task. If you’re squatting, this would mean focusing on the bar or on pushing the bar towards the ceiling.”

If the same research holds true for shooting, when we can use verbal cues that shift the shooter from focusing internally and make them focus on something external (that is relevant to the task), we are likely to see the following results:

Shooting is a psycho-motor skill.  When the factors above are enhanced, the shooter will likely perform better.

So, let’s look at some common verbal coaching cues we give problem shooters and figure out how to express them better:

Internal Focus– “Grip the gun using 40% with your strong hand and 60% with your weak hand.”

External Focus– “Squeeze the grip as hard as you would shake someone’s hand with the strong hand and then squeeze your weak hand a little stronger.”

External focus- “Feel the trigger move smoothly to the rear.”

External focus- “Watch the front sight stay in the center of your target as you complete your trigger press.“

I could go on with lots more range cues, but I’m hoping you get the idea.  Make an effort to express your coaching cues as positive statements with an external focus the next time you are helping a struggling shooter.  My guess is that you will see much better results.