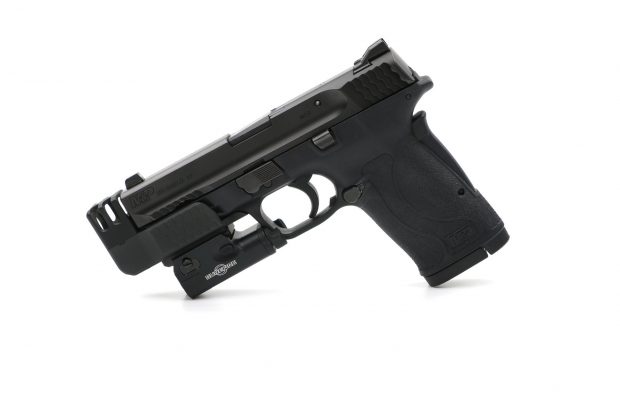 I recently saw this addition to the Smith and Wesson 380EZ advertised on the internet.  Take a look at the site.  What do you think?  Is this a useful addition to your .380 pistol?

This invention has three roles.  It is a compensator, reducing recoil and muzzle flip.  It also provides a rail to mount a tactical light.  Finally it serves as a “muzzle stand-off device.”  The final function is the most interesting.

You may not know it, but modern semi-automatic pistols have a built in safety mechanism called an “out-of-battery safety.”  That safety serves to stop the gun from firing if the slide is pulled back far enough that the round in the chamber is not fully inserted and is unsupported by the chamber walls.  If the gun were to fire with the slide partially back, the cartridge case would rupture and both hot gasses and shell fragments would fly out of the ejection port.

The slide of the pistol can be pulled back in the normal fashion.  It can also be pulled to the rear if you push your muzzle very hard into your target.  For most guns, the slide opening about 1/4 of an inch is enough to activate this safety feature.

Try this.  Unload your gun and triple check that there isn’t a round in the chamber.  Push the muzzle hard into a wall.  Try to pull the trigger.  The gun shouldn’t fire.

The same thing might happen if you pushed the muzzle of the gun into the chest of your opponent in a close range gunfight.  The “muzzle stand off device” allows you to press the muzzle into something without activating the out-of-battery safety in most guns.

Let’s take a look at each function independently and determine if it is useful or necessary.

The holes in the device vent hot gasses from the muzzle in an upwards direction.  That actually helps to push the muzzle downwards in recoil, therefore reducing “muzzle flip.”  That’s generally a good thing.

The problem is that if you have to shoot the gun from a retention position, all those hot gasses, unburnt powder, and possibly bullet fragments are vented directly into your face.  At best case, it’s a distraction.  At worst case, you might lose night vision from the flash in your eyes or potentially be injured by the blast.  Serious injury wouldn’t be common, but it would certainly be possible. 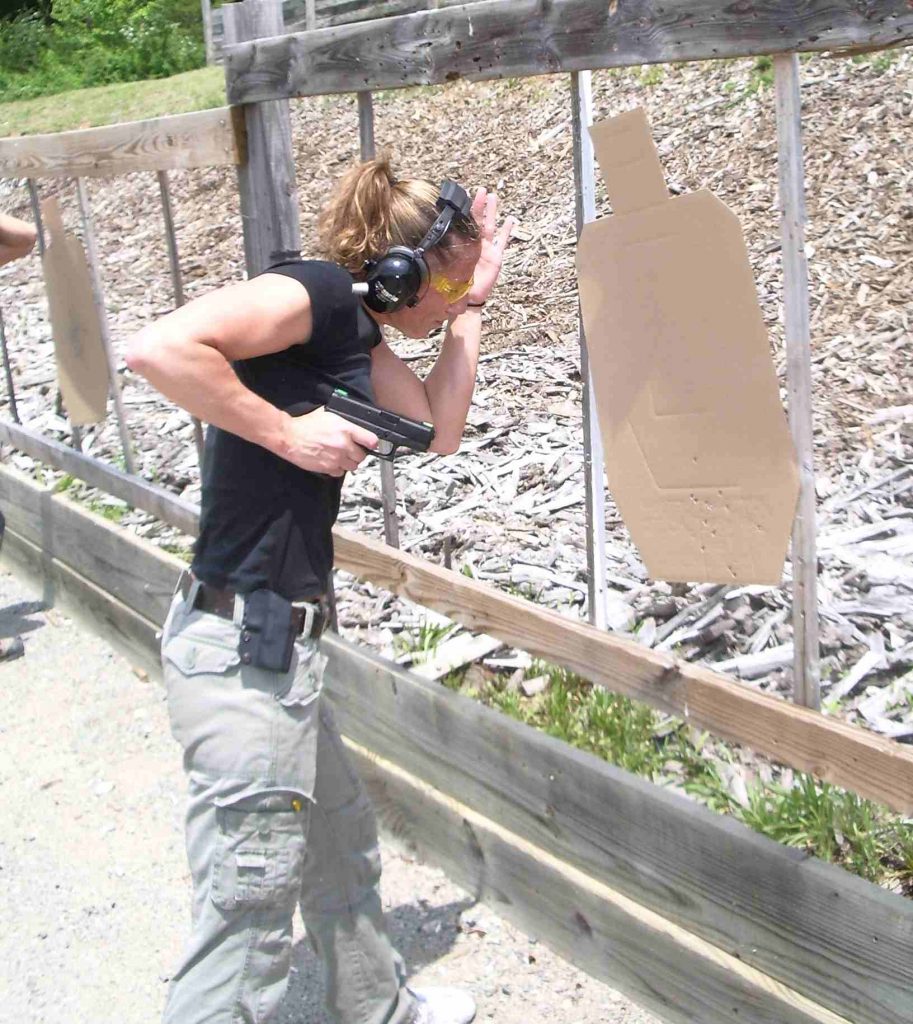 Where do you think all those hot gasses go when firing from this position?

I don’t want to get hurt by my own gun during a gunfight.

Let’s be realistic.  This is a full size gun shooting a .380 acp cartridge.  There is virtually no recoil or muzzle flip.  What are you trying to control with a compensator?  There are tremendously few people who would be bothered by this gun’s recoil.  No one needs a compensator to shoot it well.

There’s not much of an advantage to using a compensator on this gun, but a large disadvantage if you have to shoot it in a close range gun fight.  For that reason, none of my defensive guns have compensators.  On this gun, the negatives far outweigh any benefits with regards to the compensator.

The .380 EZ doesn’t come with a rail for mounting a flashlight.  This device allows you to attach any of the currently available weapon-mounted lights to the pistol.

The gun is primarily marketed to elderly or disabled people as a home defense weapon.  For that role, a light makes sense.  I don’t carry lights on my CCW guns, but I do have one on both my police duty weapon and the gun that lives on my bedroom night table.

I think having a light on a home defense gun is a great idea given that you also have a handheld light and know how to alternate between using the two.

The Stand Off Function

What is the advantage of pushing the gun muzzle into the flesh of your attacker?

Why would you need a gun that allows you to use that particular technique?

The primary advantage of a contact shot is that all the hot gasses also follow the bullet into your attacker’s body.  Those gasses can increase the amount of tissue damage.  The wound channel from a contact shot will be approximately 50% larger than one fired from a distance using the same weapon.

That sounds great.  Why wouldn’t we want to do this?

Because extending the gun away from an anchored retention position in an arm’s length gunfight makes it much more vulnerable to a deflection or gun grab.  Wouldn’t it suck if the bad guy snatched your gun as you tried to drive it towards him for the contact shot?

I’ll sacrifice the larger wound channel for the retention advantages of keeping my gun in a quality thumb-pectoral index shooting position. 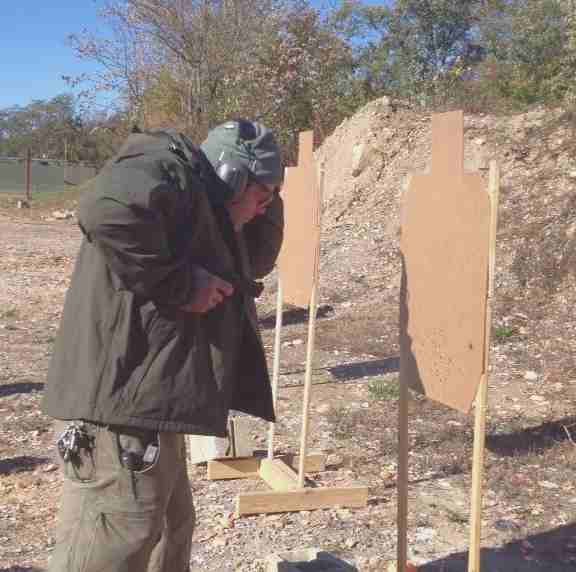 In a close range fight, extending the gun towards the attacker dramatically increases the chance your weapon will be grabbed. Keep it in retention.

Do not shove the gun towards your attacker when you are within reach of his hands.  It’s a perfect recipe for getting your gun taken away from you.

Successfully keeping your gun running in an extreme close quarters gunfight requires a software solution rather than a hardware solution.  You need to do more training and practice firing from the retention position.  If you do that,  you won’t need to shove the gun closer to your attacker.

This device solves one problem (making contact shots) while simultaneously creating a much bigger issue (getting your gun taken away).  The device encourages users to utilize a sub-optimal technique in a close quarters gun fight.  That’s not good.

If you want to mount a light to your .380, this device provides a solid mechanism to do so.  All of the other “features” are actually serious disadvantages in a close range gun fight.

This stand off device looks to be well designed.  It  probably solves some of the problems its designers have identified.   But using it in a contact distance gun fight may create even more serious issues than the original problems themselves.

You  won’t find one mounted on my Shield EZ 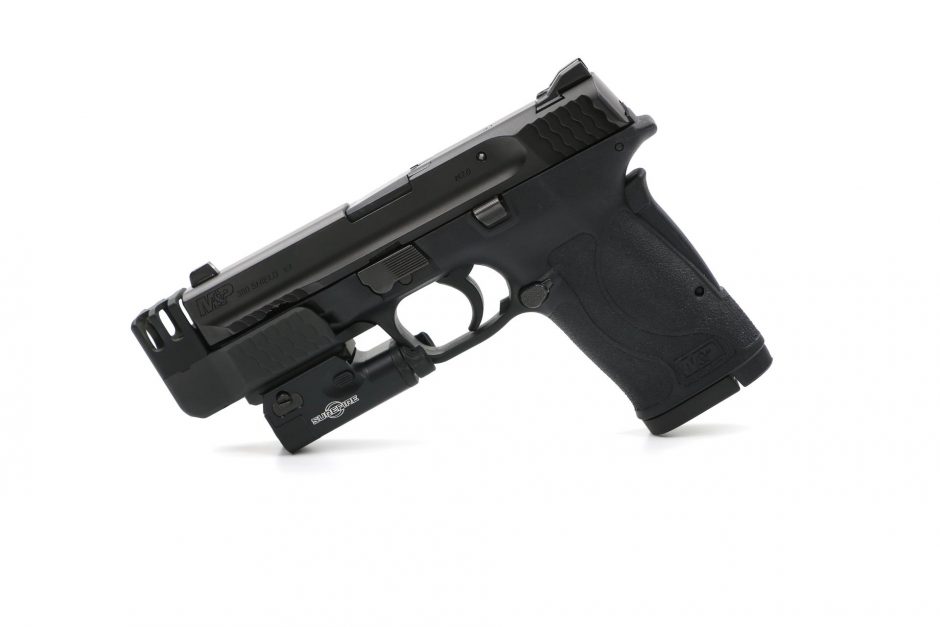