I’m guessing that most of you who are active in the firearm-related blogosphere have seen this story.  If you haven’t, please check it out:

This guy says his gun went off when it fell out of his waistband as he was engaging in some playful wrestling with a woman on the street outside the bar.  The round that fired hit his companion in the stomach.  She died at the hospital.

The gun was described as a .380 semi automatic (no make or model provided).  Guns don’t just “go off.”  One of two things happened  Something might have pulled the trigger. That “something” may have been his finger as he was trying to catch the falling gun. The trigger could also be pulled if it caught on an item of his clothing as the gun fell.

The other possible option was that the gun discharged when it hit the ground.  Most modern pistols are “drop safe,” but they aren’t often tested by dropping the weapons at every height or at every angle.  Even guns that pass industry standards for drop safety will still fire if they hit the ground with added force or at a strange angle.  He may also have been carrying an older gun (like a Colt 1908) that isn’t drop safe.

Our suspect here wasn’t the best role model for the concealed carry community. He has two prior aggravated robbery convictions, making his possession of a firearm illegal.  He was an admitted founder of a street gang.  Some other statements from the article will speak towards his mindset:

“He told them the shooting was an accident and that he had the handgun in his waistband so he could “quick draw.” “

“Taylor said he was “too drunk” to stop the handgun from falling from his pants. “

” He said the gun’s safety was not engaged because “he doesn’t have time to disengage the safety should he need to shoot in public,” the charges say. “

He was a drunk gang banger who was illegally carrying his pistol in an irresponsible manner.  Why should we law abiding gun owners pay attention to this incident?

The first reason is that when people get killed by accidental gunshots, it makes all of us who carry guns look bad.  People who don’t own guns fail to understand the difference between an incident where an irresponsible felon negligently shoots someone and when a legally armed citizen has a negligent discharge.  It’s all “gun violence” that irreparably harms the reputation of legal gun owners everywhere.

The second is that many of you lawful carriers will carry your gun in the same manner.  I’m certain that you all know someone who carelessly shoves his gun into his belt and carries it without a holster.  We need to better educate our own folks to ensure that they don’t fall victim of an accidental gun shot set up by a lack of attention similar to the one we see here.  This incident could have been prevented.

If you are new to carrying concealed weapons (or if you have just never learned the proper way to carry a gun), pay attention to the following guidelines:

1) Use a holster.  This dude had his gun tucked into his waistband.  That’s generally poor form.  Even if the gun has a heavy enough trigger pull to make accidental discharges unlikely, sticking the gun into the waistband isn’t very secure.  The gun will move around, making your drawstroke slower and less consistent. The gun may also fall out during a physical struggle. Invest in a holster and use it.

One could argue that it is relatively safe to carry a revolver or a double action automatic without a holster.  I still don’t think that it’s the best option.  Carrying without a holster should be absolutely forbidden if you are carrying a striker fire pistol without a thumb safety.

2) Use a holster that covers the trigger guard.  Holster makers are better about this feature now than they were in the old days, but you can still find holsters that leave your trigger guard open.  Don’t use them.  They are a recipe for disaster.

3) Use a holster that fits your gun.  Those “one size fits all” holsters you can buy at the gun show don’t fit any gun well.  They will be less comfortable to carry and will likely be slightly too tight or slightly too loose.  Both can cause problems.  If your holster cost less than $20, you either got a great deal or you shouldn’t be using it.  And I don’t care if it does say “tactical” on the label.

4) Make sure your holster has rigid sides.  You should not be able to pull the trigger of your gun while it is in the holster.  Some of the cheaper nylon and suede inside the waistband holsters will allow you to do just that.  It’s an accident waiting to happen.  Invest some money in your lifesaving equipment.  There are a few good holsters on the market under $50, but they are rare.  Most of the better ones cost upwards of $100 or more.  How much is your life worth?

5) If your gun begins to fall, don’t try to catch it.  Catching a falling gun is a surefire way to create a negligent discharge.  It’s my guess that the gun in this incident was fired as the drunken man attempted to catch it while falling rather than when it struck the ground.  If the gun slips out of your holster or waistband, let it fall to the ground.  There is less of a chance of an accidental discharge from a fall than there is of a negligent discharge when your fingers get inside the trigger guard of a falling pistol.

Pay attention to these rules and you will be less likely to shoot yourself or someone else.  The rest of us who carry concealed pistols will be grateful for your responsible actions. 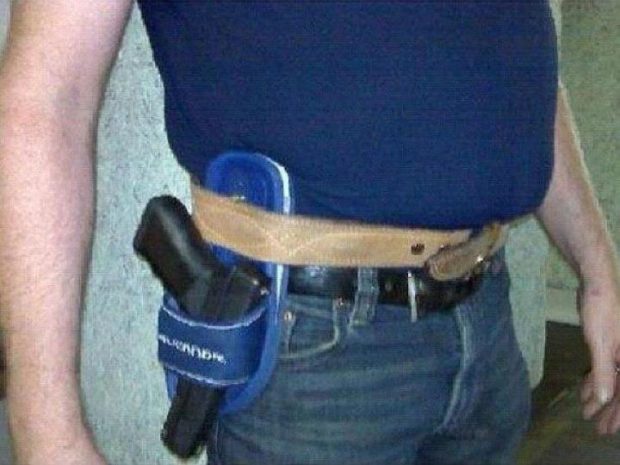 This probably isn’t the best choice for a CCW holster…. 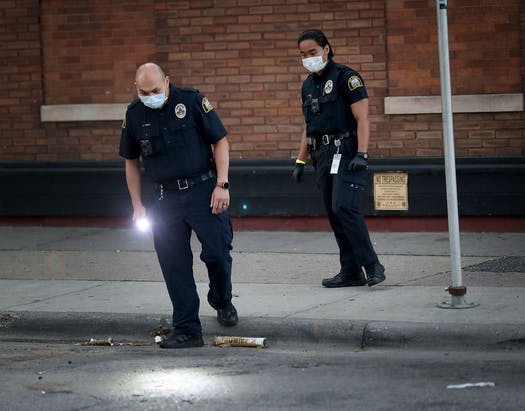