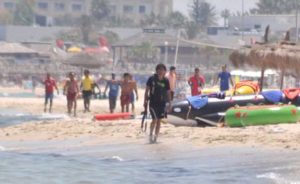 Read this article.   In last week’s Tunisian attack, the first cop who arrived refused to go after the killer because he (the cop) wasn’t wearing body armor (which likely wouldn’t have stopped an AK round anyway). A man who worked at the hotel beach activities stand took the cop’s gun and went after the killer. Unfortunately, the hotel worker couldn’t use the weapon. He had difficulty with the safety, got one shot off (that missed) and then the gun jammed.

We’ve seen the same thing in most of the large active killer incidents outside the USA…cops unwilling or unable to do their jobs. It was a huge problem in the Mumbai attacks and the attack on the mall in Kenya.

If you are traveling internationally in third world countries you really shouldn’t expect that the local police are competent. Know how to use any weapon you may encounter. If a tourist or hotel worker could have correctly operated the cop’s gun in the Tunisian event, the killing would have been stopped 20 minutes earlier.

A standard pre-travel ritual I engage in is to prepare myself to use any “battlefield pickup” weapons I may be able to acquire overseas in an emergency. I look at the weapons that local cops/soldiers/security guards carry and make sure I can use those particular guns proficiently. The chance of me needing some local cop’s gun is extremely low, but so is being caught in a hurricane or trapped in a volcanic eruption. I’ve experienced both of those disasters while traveling and want to be prepared on weapons side of things as well.

All across the world, the most common gun that you will see in public is a double action .38 special revolver. Armed security guards are more prevalent than the police and military in many developing countries. All those guards carry a .38 wheel gun in some kind of cheap nylon holster. In a crisis, if I had to arm myself, I would either offer to buy one of those guns for an exorbitant sum of money or I’d choke out an unsuspecting security guard (sorry dude) and “acquire” his weapon.

The problem doesn’t end with the mere acquisition of a revolver. Some other limiting factors necessitate that you not only have the gun in your possession, but you be exceptionally skilled in its use. Because the security guards who carry these revolvers rarely carry spare ammunition, and the ammunition they do carry tends to lack stopping power, you must focus on extreme accuracy and making fast head shots. One round of round nose .38 to the chest isn’t a fast fight stopper and you won’t have extra bullets to spare. Plan on using more head shots than you might normally consider. The combination of faster stops and fewer cartridges used is exactly the solution you will need.

You will find a variety of weapons carried throughout different countries. In Latin America and the Caribbean, the .38 revolver that I described above is exceedingly popular. You will also see a lot of pump action shotguns, many of which will be equipped with pistol grips. The ubiquitous nature of those two types of weapons dictates that the knowledge of their use is critical before traveling. In all my other travels in third world countries, I see the following other guns most commonly carried on a regular basis by the local cops/soldiers/security guards:

To be a well-rounded and better prepared traveler, you should understand basic operating functions of all of those weapons. They are the ones you will most likely see. If the topic interests you, talk to your gun owning friends and ask them to take you to a shooting range and show you how guns like these work. You may also be able to talk a friendly gun store clerk into giving you an impromptu lesson. If you have time, use Google Images and search “xxxx country police weapons.” Look at the guns you see the cops carrying and make sure you are at least proficient on those weapon systems.

Knowing what types of guns the police and military carry in your destination country may have additional benefits as well. If you are stopped by a group of criminals posing as police officers or soldiers, you may be able to recognize that their lack of authority when they aren’t carrying the kind of guns cops/soldiers carry in that area. That bit of knowledge saved the life of a friend of mine when he was stopped at a roadblock by a gang of criminals posing as soldiers on the border of Guatemala. As he was driving up to the roadblock, he recognized that the weapons and uniforms the “soldiers” were using didn’t fit those carried by the other soldiers he had already seen in the country. He sped through the roadblock and escaped. When he reported the incident at a military base down the road, the real soldiers returned to the area of the roadblock and found six people stripped naked and bound in the jungle. The thieves had tied them up and were planning on executing all of them at the end of the day after victimizing as many travelers as they could. It pays to know your local weapons!