This installment takes a look at Dominick and his Kimber Solo.

Let’s start with the Kimber Solo.  I’ll honestly admit to not having a tremendous amount of experience with this weapon.  I’ve shot a couple that students have brought to classes.  They seemed to shoot well, but universally the functionality was poor.  Malfunctions were extremely common with every sample I’ve actually seen in real life.  I don’t see many because most students don’t trust them as carry guns and consequently don’t bring them to my classes.

Be careful with any Kimber pistol, especially one that is “new” like this one.  As a brand, I’ve seen more problems with Kimber guns than with any other brand I’ve seen in my class.  It seems they have inconsistent quality control.  Some guns run great.  Most of the rest don’t.  You may be the statistical anomaly and get a good Kimber, but for my money, it isn’t worth taking a shot at the cosmic lottery.

Even more worrisome to me than the gun is the holster.  There is nothing wrong with the holster iteself, it appears like a well built inside the waistband holster.  My problem is with how it is carried.

According to the link Dominick carries his Solo in “a Winthrop in the waist band, right hand draw from a left handed holster, from the small of my back. Its perfectly unnoticed wearing a T-shirt over jeans.”

I’ve written about small of the back holsters before.  They are universally a bad idea.  Don’t carry your gun this way.  There are no advantages and many disadvantages (see my earlier link for details). 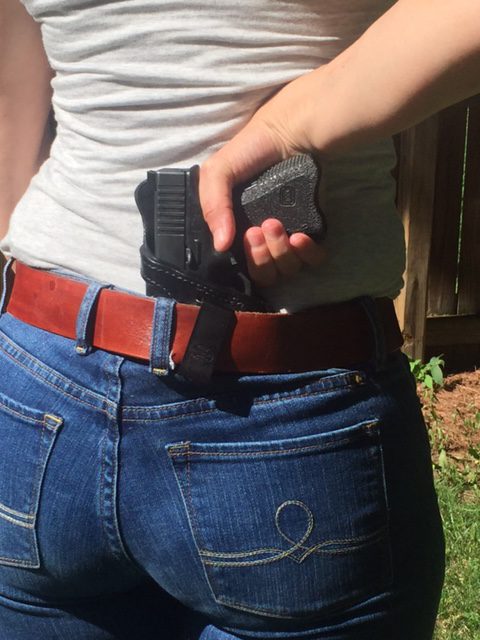 This is an awkward drawstroke that is easy for a criminal at close range to foul.  Even worse, most people muzzle themselves when drawing from this position.  When they try to draw quickly and bring the gun up to the target in a rapid manner, it ends up looking like the picture below. 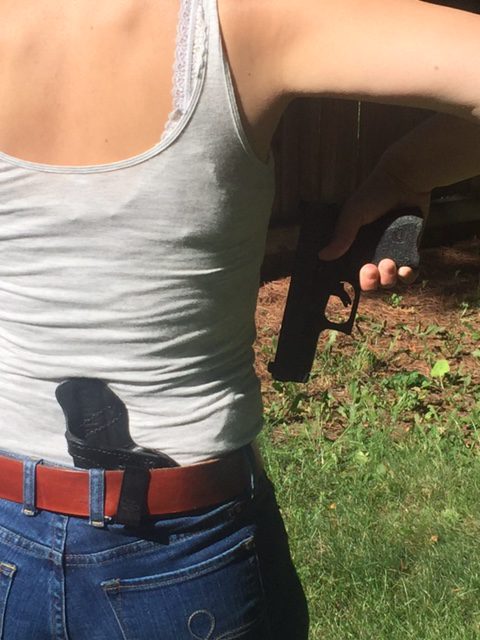 See the problem?  Pointing your own gun at your midsection is problematic.

There is a safer way to draw a pistol from this position that involves keeping the muzzle pointed at the ground as the shooter rotates the gun.  It’s significantly slower, however, and most shooters just end up pointing their guns at their bellies when they draw from this position.

Questionable gun combined with an awkward and dangerous drawstroke.  Don’t dig this rig.