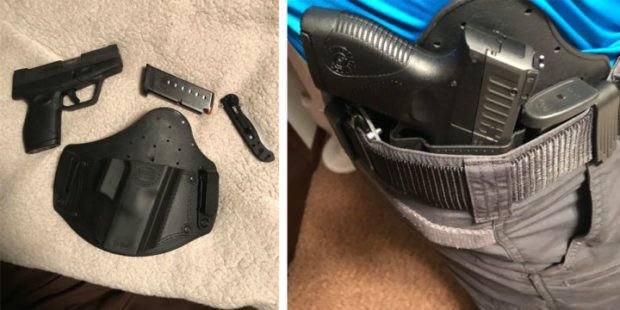 This installment takes a look at Ken and his Taurus PT709 in a Fobus holster. 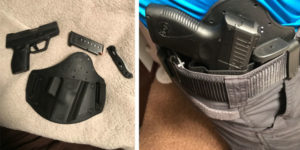 Let’s start with the gun.  I’ve written extensively about Taurus pistols before.  I don’t like them.  They simply are not as reliable as other pistols made by Glock, Sig, Smith and Wesson, HK, or Walther.  With that said, I have very limited experience with the PT709.  I’ve never shot one myself.  I’ve only had one student bring one to a gun class.  If I recall correctly, that particular pistol ran OK.  Given my experience with other Taurus weapons, I don’t think I’ll be changing my mind about the brand any time soon.  If you want a slim, single stack 9mm, choose a Glock 43, S&W Shield, or Walther.

I’ve also written about the holster before.  This is the prime example of “Bad IWB Holster.”  Everything that is wrong with IWB designs is present in this model.  Don’t carry your gun in a Fobus holster.  All Fobus holsters are subpar.  This one is exceptionally bad.

If I’ve already written about the gun and the holster in previous columns, why include this example in my Don’tDigTheRig series?

“The nice part about the Fobus holster is he (sic) gaps between pant and holster on each side allow me to carry my extra mag and knife all in one spot freeing up pockets and maintaining mobility.”

Carrying a magazine here is a bad idea.  First of all, it is a long reach for your non-dominant hand to acquire when your gun becomes empty.  Most knowledgeable shooters carry their spare magazines where they can quickly reach them with the non-dominant hand.  This ensures a fast and fumble-free reload.  Placing the magazine far onto the strong side will add time to Ken’s reload.

Without any type of mag pouch, there is nothing other than belt tightness to keep the magazine from sliding down his pants.  When the gun is drawn, there will be slack in the belt area.  On any rapid movement, he’ll likely lose the magazine.

An even bigger problem is that he clips a folding knife  just behind the gun’s trigger guard.  Take a close look at the second photo Ken posted.  It looks like the knife placement would interfere with the firing grip on the gun while it is in the holster.

This is very important for all concealed carriers to understand.  You must be able to achieve a full firing grip on your gun when it is properly secured in your holster.  If you can’t get a firing grip in the holster, you have one of two choices once the gun is drawn.  You can either shoot the gun with a sub-optimal grip or you can adjust the gun in your hand after the draw.  The first leads to accuracy issues and an increase the chance for malfunctions.  The second takes critical time in your gunfight.  Neither option is desirable.  Make sure you can get a full firing grip on your gun with every holster you carry.

Besides interfering with the draw, a knife placed behind the gun is useless for weapon retention.  If Ken uses his strong hand to secure his gun from a gun grab attempt, he will be forced to use his weak hand to deploy the blade.  Carrying the knife behind the gun makes it difficult to draw with the support hand.

Even if Ken doesn’t anticipate needing the blade as a weapon retention tool, he may be relying on it in another role as a back up weapon.  If it is a backup to the gun, one likely scenario where the blade has utility is if the gun is damaged or malfunctions.  If the gun is damaged by gunfire, the strong hand will likely be hurt as well.  How will he draw his blade?  If the gun malfunctions, he would have to either holster the gun or transfer it to the support hand in order to free up his strong hand to draw his blade.  Those aren’t good options.

If Ken anticipates using the knife as either a weapon retention tool or a back up weapon, it would be better placed on the opposite side of the body where it can be more easily drawn with the support hand.