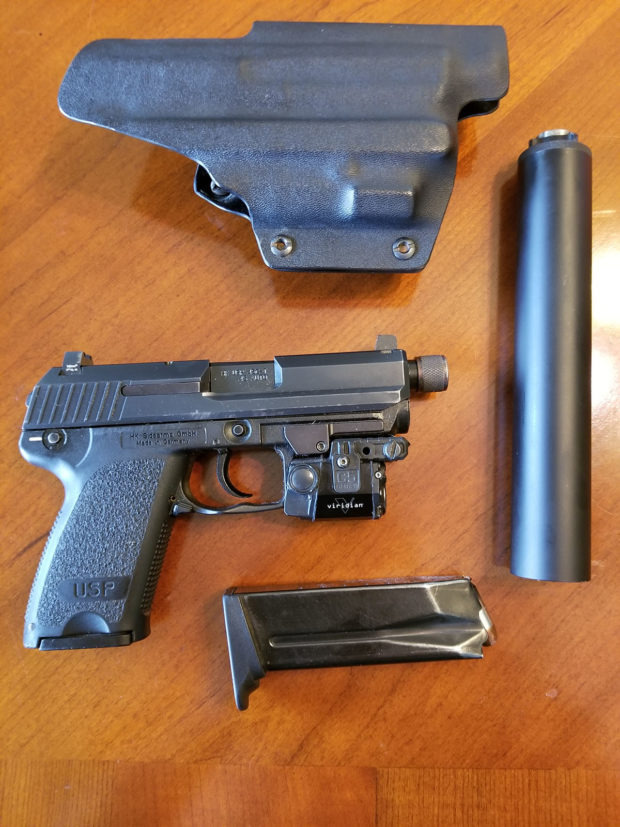 This installment takes a look at Rob and his H&K USP Compact .45. 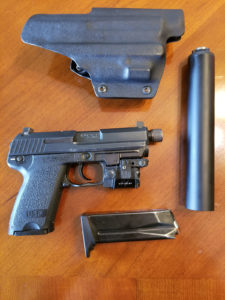 Let’s start with the gun.  Unlike many of these selections, I have no problem with anyone carrying a HK USP Compact in .45 acp.  The gun is chunky, but it is generally reliable.  I don’t know which action type this particular gun features.  The USP can be a traditional double action or a double action only gun.  In some models, it can even be carried “cocked and locked.”

For a beginning shooter, the traditional double action pistol is tougher to learn than most other options.  With that gun, the shooter must learn two distinct and different trigger pull lengths and weights.  In general, I would tell most folks to avoid that unless they really want to spend a lot of time practicing.  The HK DAO trigger is fairly smooth and easier to learn.

While I don’t consider a laser a necessity on a defensive pistol, there are times where it is useful.  I’ve found the green lasers to be significantly brighter and easier to pick up than the red ones.

My problem with this particular laser is that it isn’t very easy to quickly operate.  All the lasers I have on my carry guns are operated with a grip switch so that I can easily turn the laser on or off with only one hand.  The button on this laser requires activation with either the trigger finger (bad idea to do anything with the trigger finger besides pulling the trigger) or with the off hand.  I’ve seen a whole lot of my students running lasers like these to completely forget to turn them on under stress.

The lasers also make it significantly more difficult to find a quality holster.  Many holster manufacturers don’t want to create stock holsters for every possible laser sight on the market.  If you choose to mount a laser on your carry pistol, you may have to look pretty hard to find a top quality holster to carry it in.

What about the suppressor?  I don’t think it is necessary and may cause you problems on a defensive weapon.  I have handgun supressors, but I don’t carry them for defensive purposes.  Do you really think you’ll have time to screw your can onto your pistol before you have to shoot a bad guy on the street?  I’m all for saving your hearing, but rolling with an unattached suppressor in your pocket, seems a little bit too “try hard” for me.  I would imagine that a lot of juries would feel the same way.

What about the holster?

Now we have some things to talk about.

To begin with, small of the back carry is quite possibly the worst position in which to carry a gun

Take one more look at the holster below.  See any other problems? 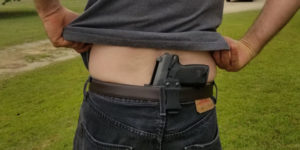 Rob’s holster has a belt clip that looks like it is designed for a 1.5″ belt.  It appears that Rob is wearing a one inch wide belt.  That can create some problems.

IWB holsters that clip to the belt are inherently less reliable than those that use belt loops as attachments.  In almost every class, I have a student flubbing a draw from an IWB clip holster by pulling the whole holster out of the pants (with the gun still inside) rather than just drawing the gun.

When clips are wider than the belts to which they are attached, this problem becomes even more evident.  The clip was designed to stay put with a certain belt width.  If you carry a belt that is either wider or too narrow for your holster clip, you will have more problems keeping the gun stable and keeping the holster in your pants when you draw.

Pay attention to little details like matching your holster clip to your belt size.  Knowing those little tricks will make your gun carrying life much less stressful.