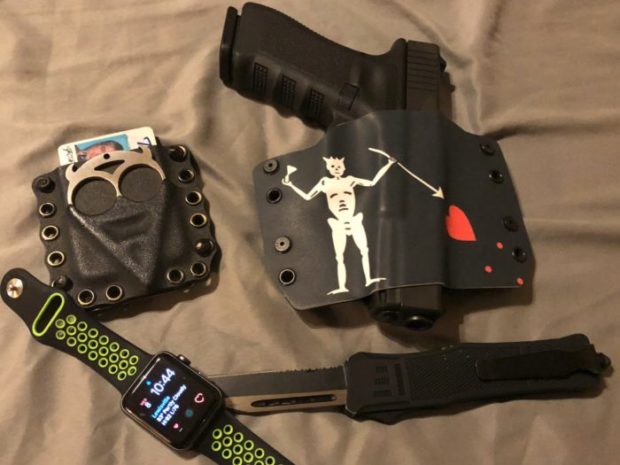 This edition takes a look at Christopher and his Glock 22 in a Bullseye holster. 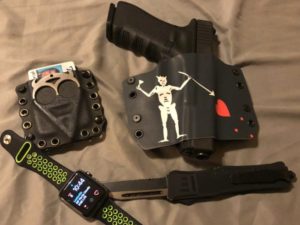 Let’s start out with the gun.  I have no problem with the Glock 22 as a carry gun.  It’s big and the .40 has snappy recoil.  Most folks will be better off carrying a 9mm, but that’s a personal choice.  If you can shoot the .40 well, the Glock 22 will work wonderfully.

Where we start to have problems is in the holster choice.  I really don’t like open topped kydex holsters without retention unless the gun is always concealed.  As an open carry holster, this holster doesn’t hold on to the gun very well in a fight.

That issue is compounded with this particular rig because the muzzle sticks out beyond the bottom of holster.  Any bump of the muzzle from below can cause the gun to pop out.  It commonly happens when people sit down on a hard chair, fall to the ground in a fight, or get “mounted” by an opponent in a ground altercation.  When the attacker straddles your supine body, his knee will often drive the gun out of the holster unexpectedly.

Then we come to the issue of “artwork” on the gun or the holster.  I’m generally against the idea in principle.  No matter how innocent the art may appear, the prosecution will always come up with a theory to make it seem that you are either malicious or irresponsible.  Does anyone actually think occult symbolism, skeletons, and spears to the heart will make it easier to defend your shooting case?  Don’t put that stuff on your gun or holster.  It provides easy ammunition for the prosecutor or your attacker’s civil attorney to use against you.

What about his assorted other carry gear?  The spiky brass knuckles “cat eye” keychain in the kydex holster is a problem too.  When carried on a keychain, such an item might be overlooked or not seen as a weapon.  The same device in a kydex holster screams “weapon” to any cop you encounter.  In many states, such devices (designed to cause more damage when worn over the hand when punching) are ill-defined by law.  An aggressive cop could very easily make a case that you are carrying a deadly weapon that may or may not be covered by your CCW license.  Use caution with these things.

The knife appears to be an out-the-front automatic.  I generally don’t recommend automatic knives for self defense.  They are often slower to open than a traditional folder when carried with the safety on.  When carried without the safety engaged, they regularly open up in pockets, especially during a physical struggle.

In general, the people on your jury will find the idea of stabbing an attacker repulsive.  “Good people” don’t carry knives.  Knives are thought to be the weapons of thugs and gangsters.  This is especially true for automatic knives.  Carrying one may be illegal in some states and will most certainly prejudice a jury against you in a trial.

I prefer to carry a nondescript utility style knife that doesn’t look offensive.  My daily carry knife is the Spyderco Delica.  It looks innocuous and I can open it just as quickly as an automatic knife with the safety activated. 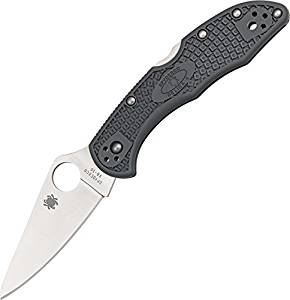 Taken as a whole, how would this equipment load be portrayed to a jury (none of whom is likely to have ever carried a weapon)?

You are carrying a gun in a holster with a picture from Blackbeard’s Pirate Flag showing a spear going into a heart.  You not only carry a specialized maiming tool to wear over your hand in a fight, but you made a custom kydex holster to carry it more efficiently.  Finally you have a scary switchblade knife.   The prosecutor will take all this and portray you as a man who is looking for a fight.  A man who embraces violence.  A pirate looking for a ship to pillage.  That really isn’t how you want the jury to envision your character as a lawful defender.

It’s hard enough to defend a lawful defense case in court.  Carrying this stuff only makes it harder.  Choose your carry gear with at least some thought of a jury and prosecutor in mind.