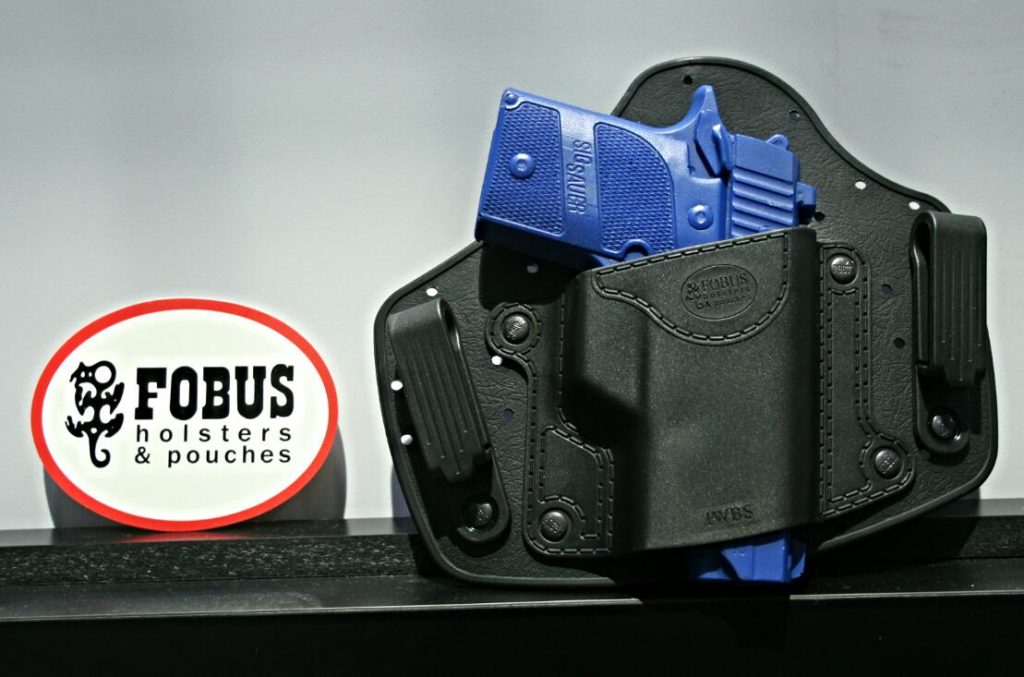 While perusing the newest firearms and gear introduced at the SHOT Show last week, I came across the new Fobus inside the waistband (IWB) holster. I have to admit that I’ve never been a Fobus fan. In fact, I think they are some of the worst holsters on the market.

My Fobus hate started when I purchased the newly-introduced Glock 30 .45 acp pistol. It was the mid- 1990s and buying holsters online wasn’t as easy as it is today. When a consumer bought a gun, he had to choose a holster that was in stock at the local gun store. When I bought my new Glock 30, the only holster available was a Fobus paddle holster. I bought the Fobus and began carrying my new Glock in it as my primary off duty gun.

A couple months later, I attended a shooting class put on by John Farnam. Towards the end of the second day, we were shooting quite rapidly. My gun got hot. I holstered up after a drill. When I tried to draw again, the gun wouldn’t come out of my holster. The hot slide had actually melted the plastic holster to the gun! The holster was ruined and I vowed never to carry another Fobus brand holster.

My disgust with Fobuses (Fobi?) intensified when I started teaching weapon retention and close quarters shooting classes. When I would conduct force on force training drills with my students, I would purposely try to disarm them. Fobus holsters never stood up to my disarming attempts. One yank downward on the grip of the gun would cause the holster to separate from the paddle. I’d tug and get my student’s entire gun and holster with minimal effort. Watch the 20-second video below for an illustration of what I am talking about. You can see why I don’t recommend Fobus products.

Why you don’t use a kydex paddle holster

When I saw the newly-introduced Fobus IWB holster, I commented to my friends that it was the worst designed IWB holster that I have ever seen. It looks like they purposely designed the holster to be a complete failure. That statement led to a discussion about what qualities one should avoid when looking at an IWB holster. I realized that a lot of folks just don’t have the knowledge base to decide what makes a good IWB holster and what features to avoid. The following features are what you want to look for and which you want to avoid when looking to purchase an IWB holster…

1) Ride height– One of the most important features that determines comfort in an IWB holster is ride height…how deeply the gun is carried in the waistband. A very low ride height makes for great concealment, but can be uncomfortable and makes for a fumbling draw. A gun that rides too high will be more obvious and isn’t as stable when carried.

In general, the gun should ride at the minimal height that allows a proper shooting grip on the gun when in the holster. If you can’t get your hand positioned correctly on your gun in the holster, you will have to adjust your grip after the draw. That is slow and provides an opportunity for dropping the gun on presentation. Look at the picture of the Fobus holster. Specifically, look where the belt will be relative to the grip of the gun.  See how it rides too low? The belt will interfere with getting the proper grip on the gun during the drawstroke.

2) Construction- The Fobus is an example of a “hybrid” IWB holster. Hybrid holsters consist of a leather or nylon piece that is closest to the body and a polymer holster body on the outside. The soft leather makes for comfortable carry, but I haven’t seen my students have any long term success with any model of hybrid holster.

What tends to happen over time is that the leather backing loses its stiffness. That makes the holster less rigid and interferes with reholstering. You will see students with floppy-backed hybrid holsters using the gun muzzle to push the leather sweat shield away from the body of the holster when reholstering. They almost always point the muzzle directly at their side when doing so.  It’s a recipe for disaster.

Hybrid holsters are popular and I’m sure I’ll get some heat for saying so, but they all suck. They are dangerous and should be avoided.

3) Material around the trigger guard- Look at all the extra material that covers the area where the gun grip meets the frame. Remember point one about ride height; we want to get a proper grip on the gun while it is still in the holster. All that extra material prevents that from happening. That will ensure that the gun is not gripped high enough to reduce muzzle flip while shooting. The extra material makes it so that the shooter must either accept an improper grip or adjust the gun before shooting. That’s another feature that is a deal breaker. Fumbling with your gun while someone is shooting at you won’t help your life expectancy.

4) Sweat shields- The sweat shield is the upward extension of the holster’s backing piece. Its purpose is to keep the gun’s slide from rubbing directly on the skin. Although I don’t like them, a small sweat shield usually causes increased comfort when carrying and doesn’t interfere with the draw. The Fobus sweat shield is way too high.  The extra material isn’t needed and can interfere with thumb positioning during the drawstroke.  Even more importantly, over time the sweat shield will lose rigidity and start to “flop” down over the top of the gun.  The floppy sweat shield will prevent getting a proper firing grip on the weapon and will make reholstering much more difficult.

5) Belt attachments- I’m not a big fan of clips that attach the holster to the belt.  I generally prefer loops that wrap completely around the belt.  Most manufacturers make crappy clips that don’t secure the holster at all.  I can’t tell you how many times I’ve seen one of my students try to draw, only to pull the holster out of his pants along with the gun.  That’s unacceptable.  Although there are some clips that work well (the Alessi Talon Clips and those made on Spencer Keepers’ custom holsters), most are inadequate.  I haven’t played with the Fobus holster clips, but I’m betting they will be in the latter category.

Over the years I’ve tried carrying a lot of guns in a lot of different holsters.  I’ve come to realize that most holsters on the market today aren’t very well designed.  It’s worth your time and money to purchase one that works.  Don’t settle for trash because of a low price point or urban legends about Israeli counter-terrorists using a specific brand.  Be smart.  If you can’t get a full firing grip on your pistol while it’s holstered, dump the holster.  Likewise if the holster isn’t comfortable or doesn’t stay attached to your belt during the drawstroke.  Life is too short.  It will be even shorter if you get killed because you can’t draw your gun from a worthless holster.