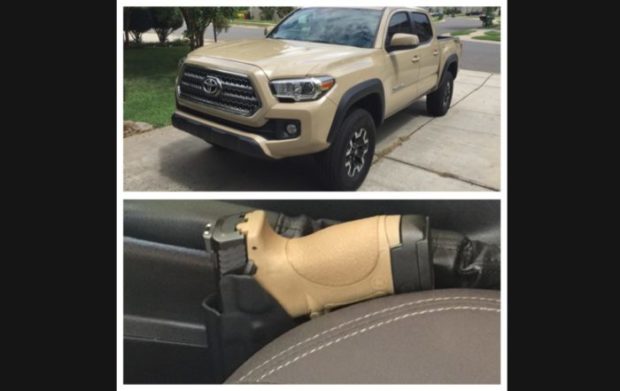 While most of the gun/holster combinations featured on the site are completely adequate, some are less than ideal.  When I see some of these sub-optimal choices, I will highlight them here, telling my readers why I think that they should be making better choices.  I’m going to call my series #DON’TDIGTHERIG.

This installment takes a look at Travis and his Smith & Wesson M&P .45 in an Alien Gear Holster. 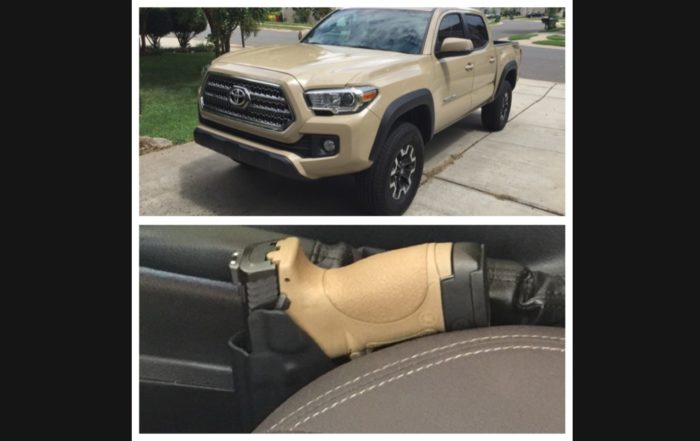 Let’s talk about the gun first.  The Smith and Wesson M&P .45 is a great pistol and I have no problems with anyone carrying one.  With that said, it’s a big gun and has a pretty large grip.  It’s best for people with large hands.

Most people would really be better served by the 9mm version of the same gun.  The 9mm allows has more ammunition (important if like Travis, you aren’t carrying a spare magazine), and allows for faster followup shots.  Ammunition is cheaper, meaning more practice is possible for the same ammunition budget.

What worries me more than the caliber is Travis’ rationale for carrying his M&P.  “Because it matches my quicksand Tacoma!”  Rather than choose a gun for accuracy, reliability, or how well you shoot it, you pick the gun based on color?

This is the defensive weapon upon which you are betting your life.  It isn’t a purse that has to be matched with your shoes.  Picking a gun solely because of its color is absolutely ludicrous.

Even worse is the idea of a “car holster.”  Your car is not a gun safe.  Carrying your weapon in any type of car holster is a really bad decision.

First of all, leaving an unsecured weapon in plain view inside your vehicle is a virtual invitation for theft.  Do you ever wonder how criminals get their guns?  A large number of them acquire pistols that have been left in car holsters by lazy gun owners.

I carry a spare pistol in my car.  It’s hidden in a locked safe attached to a structural component of the car in the spare tire well underneath a whole bunch of other stuff in the rear cargo area of my SUV.  No casual criminal is going to get that gun.  Even though the gun is secure, I still remove it if I’m going to have my vehicle valet parked or am leaving it parked for a longer period of time in a public parking lot.

Besides the risk of theft, the car holster is a tactical nightmare.  Have you thought about where your “car gun” will end up after a collision?  Is your car holster set up to retain the weapon after a vehicular crash?

You do realize that criminals occasionally initiate car jackings by deliberately crashing into the car they want to steal?  When you stop to exchange insurance information, they steal your ride and likely your “car gun” because it’s sliding around loose on the floorboards or under the seat where you can’t draw it quickly.

Even without the criminal context, if you get in a bad crash do you want an unsecured firearm on the floor or seat?  When the medics are trying to pull your unconscious body out of the driver’s seat, do you want them to accidentally discharge a round from your unsecured pistol?

After a bad car crash, the passenger compartment is a mess.  There is broken glass everywhere.  The whole interior is covered with the exploded white powder from the airbags.  Every unsecured item in the car ends up on the floor.  There’s a very real danger of a cop or fireman not seeing your loose firearm and accidentally pulling the trigger as they attempt to pry your body from the wreckage.

If you are carrying in a car holster, what is your plan if you have to leave your vehicle suddenly?  Do you think you’ll remember your pistol?  If you do remember to grab it, how are you going to carry it?  Running around with a gun in your hand is going to attract some attention you don’t want from the police and local residents.

Let’s go back to the car wreck scenario.  You get in a fender bender.  You aren’t sure if the crash was caused by a car jacker or a clueless motorist.  Do you draw your car gun to investigate?

How do you think getting out of the car with a gun in your hand is going to appear to the other driver or a witness?  It’s guaranteed to get the cops called.  When the cops show up on the call of a “road rage crash” where someone has a gun, you will be proned out at gunpoint and handcuffed.  Is that what you want?

If you get out of your car to investigate the crash and you leave your gun in the car, how are you going to deal with a car jacker or angry mob?

The car holster is just a bad overall idea.  Carry your gun on your person, not attached to your car.

Equipment isn’t the most important factor in winning your defensive encounter. With that said, you don’t want to intentionally diminish your performance by using bad gear. It’s hard enough to win a gunfight when everything goes well. It’s a lot harder when you have poorly-chosenl equipment. 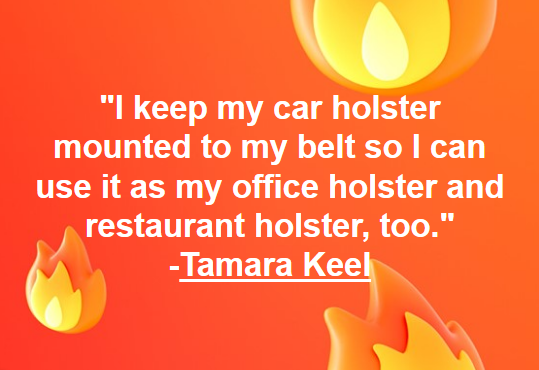