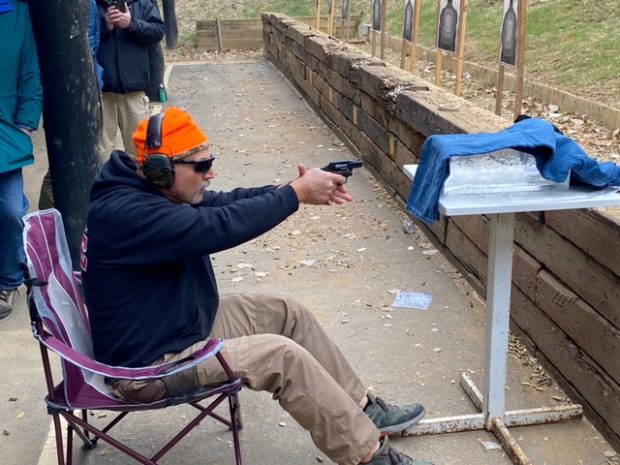 One of the more popular demonstrations at the annual Pat Rogers Memorial Gunsite Revolver Roundup every year is the ballistic gelatin testing block conducted by Chuck Haggard and Mark Fricke.

Last week, Mark got all the bullet penetration, expansion, and velocity information categorized into an easily digestible table.

The results are very different than what you might see on the ammunition manufacturer’s website.  Most gelatin tests done by the factory are fired out of guns with barrels at least four inches long.  Expansion is different when the same bullet is fired from a snubby with significant less velocity.  Additionally, most manufacturers report bare gelatin data.  Lots of rounds expand in bare gelatin, but don’t expand in real bodies.

When you see bullets pulled out of bodies at autopsies, you rarely see the perfectly expanded mushroom-shaped hollowpoint bullet that ammo manufacturers show you.  What you see is more similar to the results of a bullet fired into gelatin through four layers of heavy denim material.  In real life, we see far more penetration and far less expansion compared to the manufacturer test samples.

Almost all of these tests were shot through four-layer denim from snubby revolvers.  Occasionally a longer barreled gun was used or the projectile was shot into bare gelatin.  Those factors are noted in the tables below.

I posted the results from both the 2021 and the 2022 tests.  It’s interesting to note that the same bullet fired out of the same gun can have dramatically different results.  That’s what real world terminal ballistics tests are like.  Nothing is ever as pretty as you see it on the factory website photos.

Take a look at the results.  You won’t see the pretty expansion you are expecting to see.  In snub revolvers, most rounds fail to expand at all.  That’s why you see lots of expert revolver shooters recommending the .32 long/.32 magnum as well as wadcutter loads in the .38 special.  If neither the .32 or .38 (actually .357) bullets expand and they both penetrate to a similar distance, why not choose a load with lower recoil and more rounds in the gun?

Likewise, if your .38 hollowpoint doesn’t expand in real life, why not load your revolver with a wadcutter load that will shoot to point of aim, and cut the same sized hole with less recoil?

Thanks to Chuck and Mark for compiling all this data.  I share it with you all with their permission.  Take a look at the tables below and become a more educated shooter.