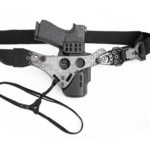 In 2016, I was teaching a close quarters gunfighting class in Virginia.  One of my students showed up wearing a Runcible Works belly band.  It performed admirably during the class and I wrote up the details in my post A Couple Gun and Gear Comments. 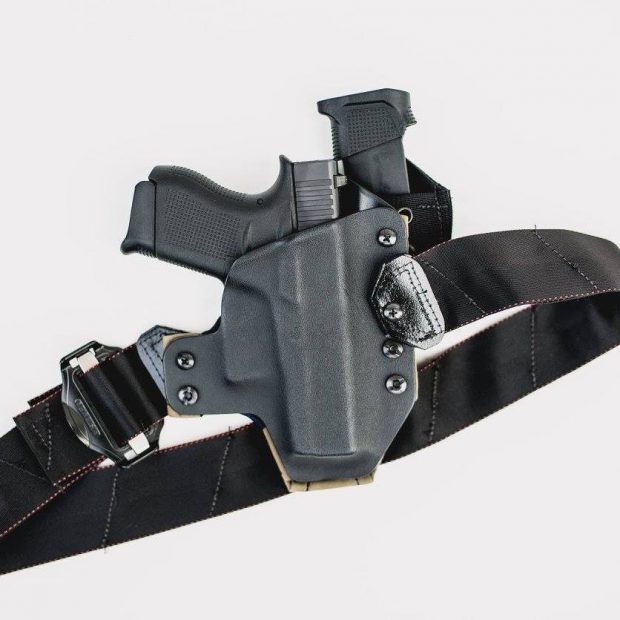 Soon thereafter, Runcible Works kind of slipped off the map.  They didn’t sell a massive number of holsters and virtually disappeared.  John from PHLster liked the Runcible Works design and contacted the owner about manufacturing it.  From the Enigma page:

“Dive deep enough into high-level concealed carry and you’ll find Runcible Works. Known for their experimental and obsessively innovative holster systems, Runcible Works creates bespoke, self-contained concealment systems for carrying in any attire.  They combine high tech materials with sophisticated, ergonomic design principles to build deep concealment gear with the lowest possible signature.  Runcible Works pioneered the concept of building the belt, holster, and accessory carriers into a single platform that functions in any environment from yoga class to entangled ground-fighting and grappling.

After years of operating in the same circles, we reached out to Runcible Works to help bring their concepts and expertise out of the mad-science laboratory and to the masses.  Together, we developed a streamlined and minimalist execution of their renowned, yet often difficult to obtain, systems.

For two years, we explored materials, strategies, and executions, going back to the drawing board several times and starting from scratch. Enigma is the result of an intense and relentless collaborative process, the output of which is a unique and unprecedented piece of concealment technology and a patent pending.”

Much of the details on design features and the advantages they provide are available on PHLster’s Enigma page for “him” and their page for “her.”

If you didn’t pre-purchase a PHLster “Pro Series” holster to go with the Enigma, you’ll have to attach your own holster. The Enigma is compatible with  NON-light bearing holsters  holsters with a ModWing, Darkwing, Raven wing, or similar AIWB concealment claw/wing attachments which have the standard 5/8ths inch hole spacing.

It’s not for use with light-bearing holsters, “sidecar” holsters with attached magazine carriers, or holsters which do not have the above-mentioned specific concealment wing attachments

Put it together with instructions from this video.

The Enigma requires a bit of fitting to get it in an ideal position.  It may be frustrating for those of you who buy a factory holster, slide it onto our belt and are then done.  You’ll want to tweak your Enigma a bit to optimize concealment with your particular gun and your body type.  It took me approximately 25 minutes in total to optimally adjust the holster.  I’m generally an impatient person with regards to this kind of minor tinkering.  It drives me crazy.  In this case, the benefits of the adjustment dramatically outweighed the relatively minor half hour time commitment to get the holster set up optimally for you.  It was a good time investment to get everything working perfectly.

John sent me a test and evaluation sample enigma several months ago.  I’ve been wearing it regularly since then, but my carry has been interrupted by recent long trips to Brazil, Mexico, and The Dominican Republic.  I obviously couldn’t carry down there.  It took me awhile to properly test the Enigma in between trips outside the country.

As a retiree who rarely has to leave home except to go to the gym, I’ve been wearing a lot of workout clothes.  The Enigma revolutionizes carry in sweat pants.  Previously, I carried in a fanny pack.  The Enigma is far more comfortable and much less visible.  I’ve worn the Enigma (with Glock 19) comfortably in the gym (deadlifting 500+ pounds) and on several long (seven-eight mile) hikes.  Some folks have reported irritation from the suspension system or the leg leash.  I don’t get either.  I wear boxer briefs as underwear and fasten the leash over the underwear and I don’t feel any discomfort at all.

I’ve worn the Enigma in “real clothes” at restaurants and on dates as well.  It conceals and carries comfortably in jeans and an untucked shirt.  I went out to dinner with my father and he commented that he didn’t think I was carrying a gun.  The Enigma was completely invisible.

I also wore the Enigma under a tucked in shirt while wearing a suit as I testified as an expert witness in a police disciplinary hearing.  A room full of cops, attorneys, and judges did not notice my pistol.

For me, the Enigma is most comfortable and concealable when I’m not wearing a belt.  When I place a belt over the Enigma, it changes how the rig carries and makes it slightly less concealable.  As I generally wear a belt (to hold up my pants and to carry other gear), I don’t see the Enigma becoming my primary carry method.  With that said, I will most certainly be using the Enigma every time I need to dress up with a tucked in shirt and when I’m wearing workout pants or shorts.  I’ll be using it a lot.  It’s incredibly comfortable and the functionality is unmatched.

If you want more information about the product, I would recommend Caleb Giddings’ and John Correia’s Enigma  reviews.

You can buy the holster and Enigma rig at PHLster’s website.  The rigs are currently back ordered because of the huge demand for such a quality product.  Put your name on their list and get one of these as soon as they become available.