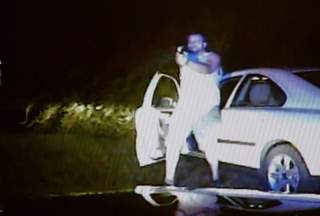 Take a couple of minutes and watch the video in the link below.  Even if you aren’t a police officer, it highlights a dangerous situation for which you should probably be prepared.  If you are a cop, do you have a plan for dealing with a pursuit suspect who quickly jumps out of a moving car and advances on your patrol car while firing?  If you aren’t a cop, imagine a similar scenario in the context of a car jacking or third-world kidnapping attempt.  Do you have a plan?  Watch the video and see what happens…

Additional information can be found HERE.  The suspect was using a 9mm Glock handgun.  Three rounds struck the officer…one in the vest, one in the hand, and one in his face (lodging in his sinus cavity).  The officer is expected to fully recover.

If you were in a similar situation, what would you do?

Many “high level” firearms training schools teach shooting firearms from vehicles.  I think that type of shooting is a useful skill to know, but is ultimately of relatively little value.  In a situation like this, imagine how long it would take to stop the car, remove the seat belt (yes, you should be wearing a seat belt during a pursuit.  You are far more likely to be killed in a traffic accident than in a gunfight), draw the gun (if it is possible because of the positioning of the console, computer, or light controls), and shoot.  By the time all that happens, the bad man has fired 10 shots at you.  It just takes too long!

In this scenario, I really think that you have only three viable options:

1) Run the shooter over.  This is an easy choice.  Your 4000 lb. car has much more “stopping power” than any firearm.  If you see something that looks like the photo above, accelerate as quickly as you can and run the shooter down.  Be prepared for your airbag to explode and be ready to get out of the car as quickly as possible so that you can get to a more defensible position.

2) Drive away.  Put the car in reverse and back straight up, turning the wheel so that the passenger side of the car faces the bad guy to cover your escape.  When you reach a safe distance, bail out of the car and fire back from the relatively safe position behind the engine block or tire.  You could also accelerate forward to gain distance as well.

3) Bail out.  If the car is already stopped and in “park”, it may make more sense to bail out and seek better cover.  The windshield and driver’s door doesn’t do a great job at stopping bullets.  Get to a position where you have either the engine block or a wheel as cover.  That might mean getting prone.  Have you ever practiced skipping bullets off the pavement into a suspect’s legs?  It’s actually a pretty easy skill to acquire.  The passenger compartment of a car is a death trap.  Make yourself a hard target by getting mobile and behind cover.

One other concern I have with this video is the obvious fact that neither the victim officer nor his first backup officer on scene knew how to treat gunshot wounds.  Unfortunately, this isn’t part of most cops’ training.  It’s a shame.  Don’t be helpless!  The knowledge is out there!  Everyone who carries a gun should have both the skills and equipment to treat a gunshot injury.  Don’t just sit there and wait for the medics, start treating yourself!  If you are conscious enough to recognize that you have been shot, you have a 95% chance of survival.  Suck it up and start plugging the holes!  If you are the arriving backup officer, reassure the victim and start treatment.  Don’t just call the medics and wait!  Your aggressive treatment may be the difference between life and death.

FBI research indicates that 21% of officers killed are killed in what the FBI has defined as “ambushes” which really means “surprise pre-meditated attacks”.  Yet very few agencies have a training program dedicated to counter ambush techniques.  Does your agency provide training about how to handle a situation like the one above?

I know that most criminals bail out and start running at the end of a vehicle pursuit.  But some (like this guy) don’t.  We have to be able to deal with both kinds.