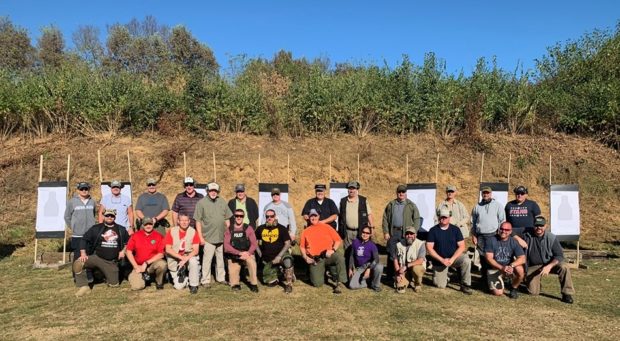 “You can’t screw up, not even once, not even a little, because someone’s life hangs in the balance.“- Tom Givens

When I looked back at the notes I took while attending a recent Rangemaster Instructor Development course, that quote seemed to sum things up best.

I’ve taken close to 100 different instructor certification classes in the last 25 year.  Not one of them made a statement like that.  Not one of them expressed the severity of the consequences should my instructional abilities be subpar.  That’s a big problem when you are giving students the skills necessary to save and to take lives.

Let’s step back a bit…

A few weeks ago, I got an email from Tom Givens.  He was hosting a firearms instructor development course in Ohio.  There was one remaining open space available.  He offered it to me.  Surprisingly, I was able to get the days off at work and take the class.

I had been wanting to take Tom’s class for several years.  I never seemed to be able to make it happen.  Whenever I found a class that was close, I couldn’t get the days off work to make it happen.  The stars aligned for this one.  It was close to home and I could get the time off.  I greedily snatched the spot and planned for three days of shooting and teaching instruction.  It was a good choice.

The Rangemaster Instructor Development Course is described as follows:

This is an intensive, full three-day course (24 hours total) that teaches candidates:

The course time is divided about equally between classroom sessions and range firing, and each student will fire approximately 1,000 rounds of ammunition. Students will act as coaches for other students, and each will be coached extensively in turn.  Students also receive a 200+ page training manual, which is a valuable information and reference resource.  To graduate from this course, students must pass a shooting qualification and pass a written examination.

The course performed as advertised.  Each day was nine to ten hours of shooting and instruction.  The class covered all of the above-listed points and more.  I ended up shooting a total of 990 rounds. 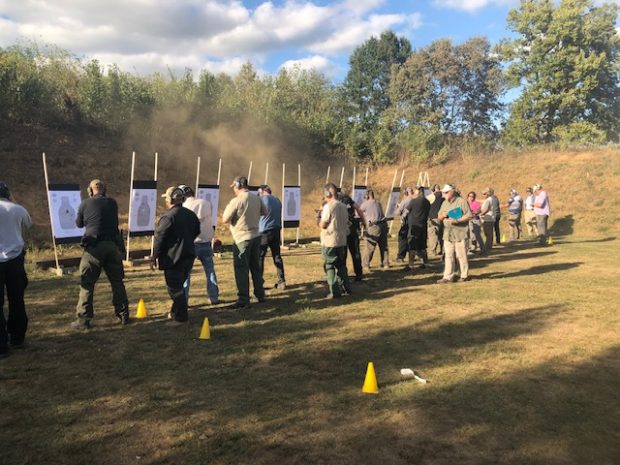 The first day was mostly classroom training.  We ended the day with a couple of hours of shooting covering the basics of grip, stance, sight alignment and trigger press.  Most of the so-called CCW “instructors” have never mastered these basics and would benefit greatly from learning the material that Tom presented.

The second day was a lot of shooting.  We covered drawing from the holster, target transitions, “seeing what you need to see to make the shot,” and common malfunction reductions.  Every single round we fired was under the observation of a fellow instructor “coach” who was looking to point out any errors in our shooting techniques.

Throughout the day, we had three different shooting competitions.  The first was shooting Justin Dyal’s five-yard roundup course. I managed to earn a challenge coin by winning this competition.  I felt pretty good about this win, considering I was shooting a completely stock (except sights) G19 from concealment while some other students were running full-sized guns with red dots unconcealed out of ALS holsters. 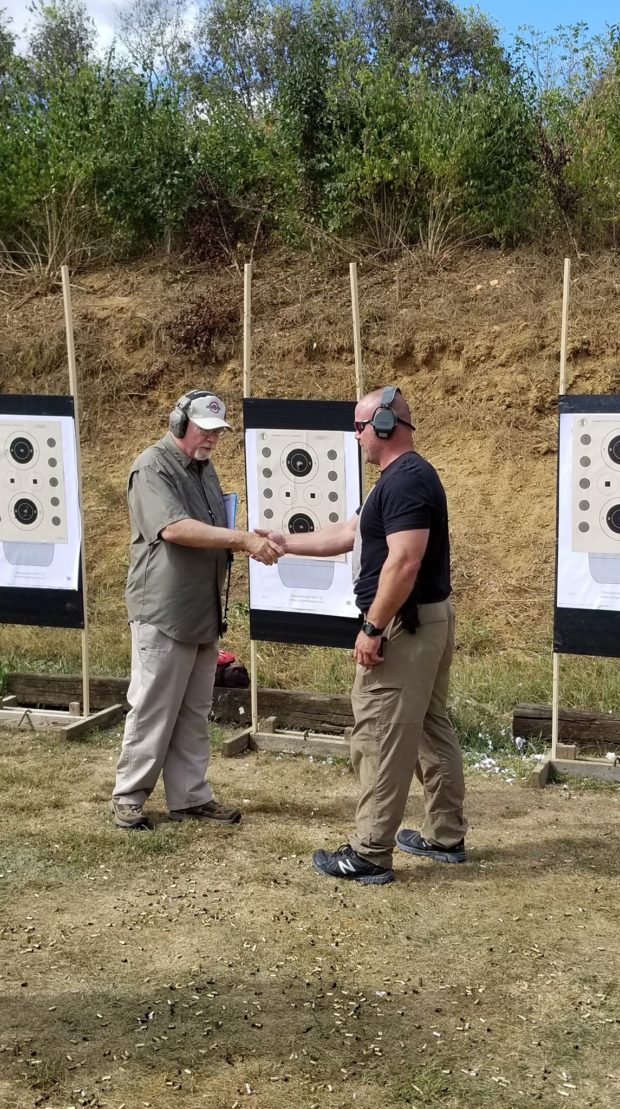 The second competition was a man-on-man shoot off that I also won.  I was on fire that day…at least until the third contest.

The third competition was Rangemaster’s famous “Casino Drill.”  Each competitor shot the course by himself on the timer with the entire class watching for added stress.  I had never actually shot the drill before.  I made the par time with all hits, but I wasn’t even close to the fastest time in class.

That drill was won by Annette Evans, a competitive shooter who owns Race Street Range in Pennsylvania.  Annette spanked everyone with a 13- second run and won the day’s second challenge coin.  Annette also literally wrote the book on Dry Fire Practice.  I’m reading a copy now and will have a review for you all soon. 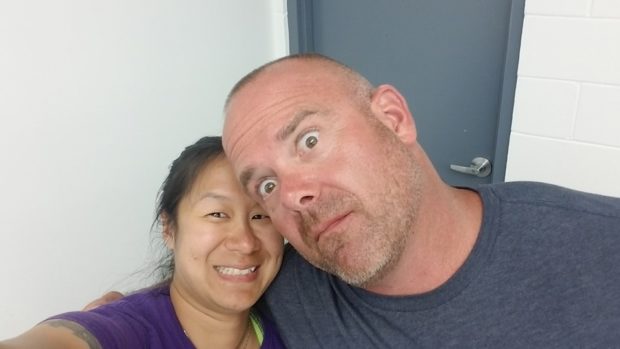 We closed out the day by shooting the FBI’s firearms qualification a couple times.  I was shooting well and managed to clean the course both times. 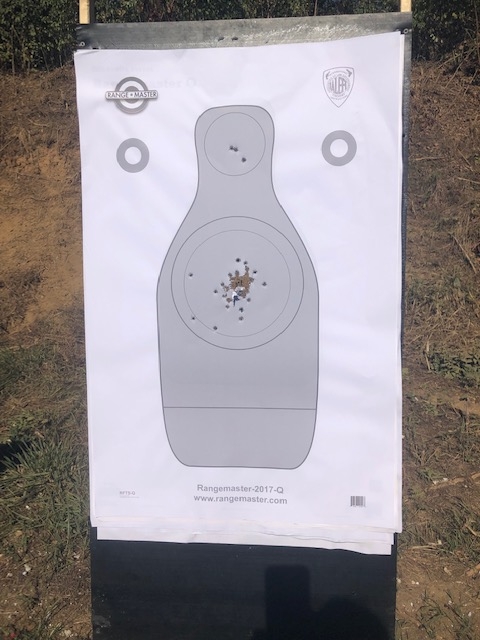 One shot 1/4 inch outside the eight-inch circle on the FBI qual.
Don’t worry about that little guy.
Still a 100% by FBI standards

Day three covered adult learning theory and several other topics in the classroom.  We then went out to the range to shoot the FBI qualification course two times and then the Rangemaster qualification course for two additional attempts.  My shooting wasn’t as good on day three as it was on day two.  I managed a 98% on the FBI course and a 99% on the Rangemaster course.

We then took a difficult 80-question written test over the concepts presented in class and the 200-page textbook that Tom gave us on the first day.  In order to earn the coveted Rangemaster instructor certification, each participant had to score above 90% on each of the FBI qualification, the Rangemaster qualification, and the written test.  I’m happy to say that I passed.  Our class was a group of high performers.  18 of 19 students got the Rangemaster certification.  Tom states that usually about 15% of any given class fails to earn the certificate.

I could write a lot more about the course, but I think you should instead experience it yourself.  This class should be on your “must attend” list if you do any firearms instruction.

I will summarize it in the best way I can.  The state required that I take a two-week firearms instructor course to teach police officers.  I was also required to take a two-week police “instructional skills” class about adult learning theory before I could teach in state police academies.  This three-day class taught me more about firearms instruction than my two week-state firearms instructor class.  I learned more practical tips about adult learning theory in this Rangemaster class than I did in the two weeks of study I did at the state police academy learning “instructional skills.”

If a simple weekend NRA instructor certification provides the knowledge you use to train your students, you are woefully deficient. If you are teaching firearms skills you absolutely need to take this class.  You are doing a disservice to your students if you don’t.

I look forward to continuing my future education by taking Rangemaster’s advanced and master instructor classes next year.  You should too.

FTC Disclosure- Tom Givens gave me a free spot in this class.  I paid for my own ammunition and travel expenses.  Tom provided the training to me without any expectation that I would write a review (either positive or negative) of the class.  I have no financial interests in the Rangemaster training organization and have received no compensation of any type for this course review.