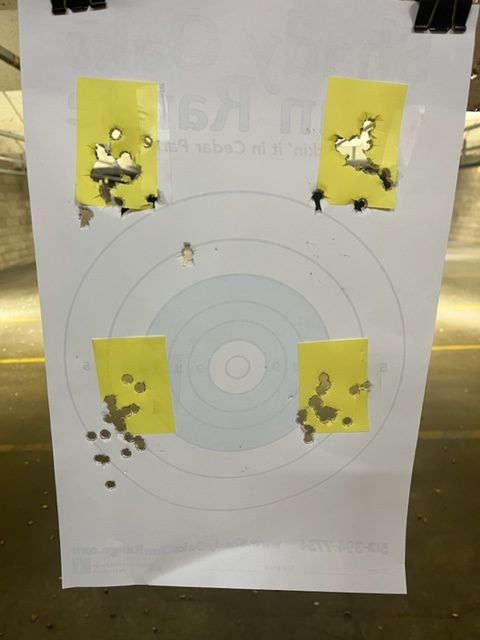 Randy Harris posted this drill on the private Facebook page for certified Rangemaster instructors.  He called it “Rastoff’s Challenge” and described it as follows.

“Course of Fire is….

No time limit . Scoring is Pass or Fail. 20 rounds total. All rounds in the X ring with none touching the 10 ring or fail. Target is a B-27 replacement center. You are essentially shooting an egg sized target 20 times in a row.”

You can buy B-27 repair center targets specifically for this drill.  I chose not to do that.  I think that the B-27 is a poor target design that trains folks to shoot at an aiming point on the body that is not optimal for a rapid stop when hit with a handgun bullet.

Instead of using the B-27 centers, I made my own targets  with Post it Notes.  The X-ring of the B-27 is roughly two inches by three inches.  I used some 2″ x 3″ Post It Notes placed on a target backer instead.

I started by shooting the drill twice cold with my Glock 19.  The results are on the top two rectangles in the target posted above.  My first group had all the rounds touching the box except one.  I completely threw one round at the seven yard range.  I repeated the drill and was able to significantly tighten the group and put all my rounds where they needed to be.

I shot the drill last week in a practice session meant to tune up my shooting for an armed teacher class and a snub revolver class last weekend.  After I shot the Glock, I broke out the 2.5″ barrel S&W 19-5.  I shot .38special 132 grain FMJ ammo out of the .357 mag snub.  Those were the bottom two boxes on the target.

As you can see, the first run with the revolver was horrible.  But like the Glock, I tuned things up for the second presentation.  I find it interesting that the snubby .38 created a group that was slightly smaller than the one I created with my Glock 19.  That was kind of surprising.

Bring your patience with this drill.  I think most of my misses were from lack of concentration and simply shooting too fast.

Even though it is simple, I like the drill and it’s easy to do on restrictive indoor ranges.  Give it a try.