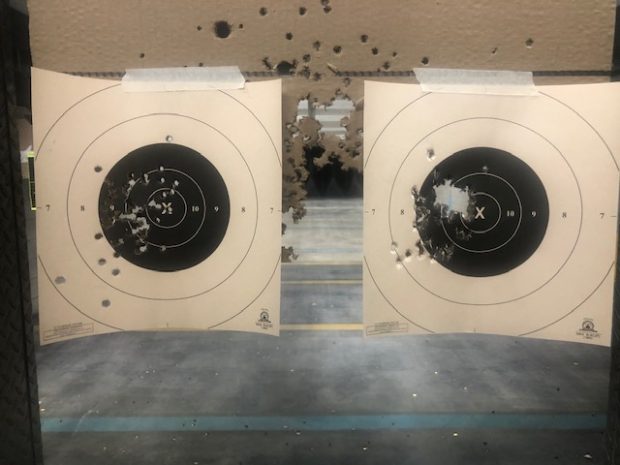 I got today’s practice drill from The Shooting Wire.  It’s called quite simply “The Challenge.”  Read about it at the link below.

The “Challenge” with Trainers

“The objective of “Rastoff’s Challenge is to place all hits into the 2”x3” oval X-ring over the course of fire, shot with no time limit.”

Each shot is fired individually from the ready position.  I shot the drill last week .  Instead of using one of my usual carry guns, I decided to conduct the drill with two different smaller carry weapons for more of a challenge.  I shot the course with my 9mm S&W Shield and my .380 Glock 42.

I hadn’t been practicing with my smaller guns and I needed to get a workout with them.

I started out doing the drill exactly as described in the article.  I didn’t have a B-27 silhouette, so I used a B-8 Bullseye instead.  My goal was to keep all the rounds in the black bullseye.  I succeeded with both guns in the first training evolution.  No shots outside the black.

As the author suggested, I then made the drill more difficult.  I ran through the 20 round drill again, this time shooting strong hand only from the ready.  That made it a little spicier.

Finally, I did the drill a third time, but shot two rounds per presentation instead of the single round required by the original rules.

My all black shots proved to be quite ephemeral.  As soon as I started shooting single handed or in rapid fire succession with these guns, I’ll start throwing some rounds outside the bullseye.

Here was my target from full evolution of the 80-round course fired with my Shield. 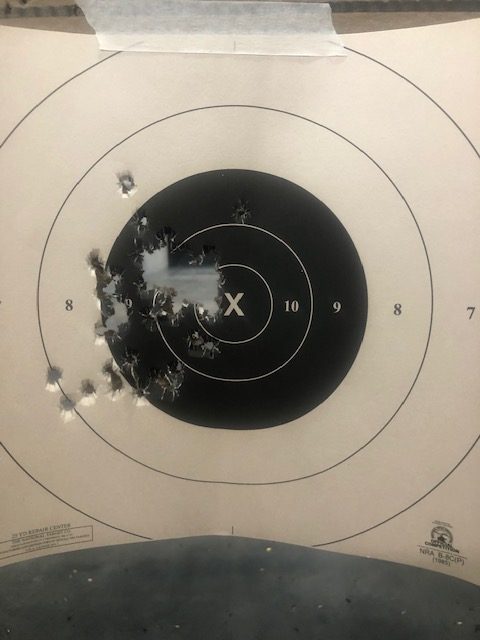 Here are the results with my Glock 42.  I was surprised that my performance was similar with both guns despite the size disparity and different trigger pulls. 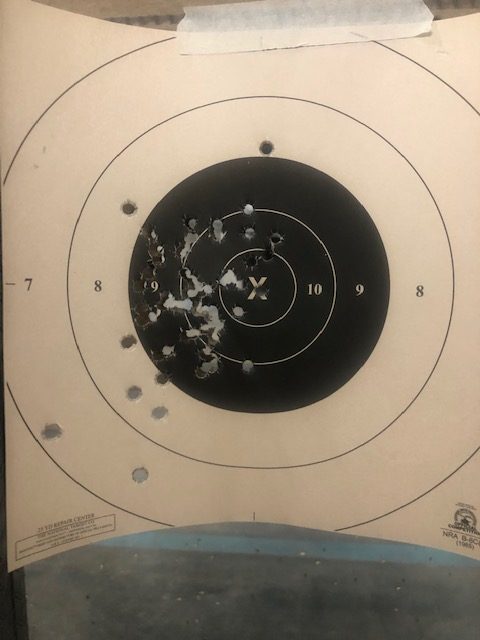 If you notice my groupings, you’ll see that my hits were mostly to the left of the bullseye.  That’s me.  My sights are correctly adjusted.

Smaller guns demand a near-perfect trigger pull.  Anything less than perfection with a smaller carry pistol will be expressed much more easily as a miss.  I have big hands.  I notice that I can be much sloppier with my trigger finger when using a full sized gun.  On the smaller guns where my hands are already too big for the gripping surface of the pistol, I recognize that a very small deviation in how smoothly I press the trigger matters a lot more than when I shoot my bigger guns.

With the Covid-19 virus, my recent retirement, some medical issues, travel, and teaching I simply haven’t been shooting as often as I would like to practice.  If I take a couple weeks off of shooting my full-sized carry gun, I usually only notice a very small decrease in performance.  That decrease is magnified significantly when firing smaller weapons and firing single handed only.

After barely practicing with these guns at all for the last six months, it’s obvious that my skill level has declined.  That diminished skill level is easier to mask when shooting a full sized gun while using both hands.  Since two handed shooting with larger guns is the skill I practice most often, it is the least affected motor pathway once practice becomes  infrequent.

Don’t think that you are doing great only training a couple times a year on the pandemic shooting plan.  Try shooting your smaller guns.  Try shooting one-handed only.  I think that your shooting skill set looks far less impressive than the groups you shot with both hands on your full-sized gun.

I know where I have work to do.  I’ll be focusing on single hand stuff for the next few practice sessions.

Give this a try.  It requires nothing more than a cheap bullseye target and a lot of concentration.  It’s a perfect drill for those times you are shooting at a range that doesn’t allow drawing from the holster or “rapid fire” shooting.

Side by side comparison. G-42 on left.