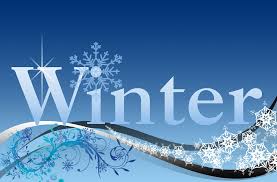 I occasionally get questions from readers about changing their defensive ammo to better defeat heavier winter clothing in the colder months.

People who consider an ammo change generally do it for one of two possible reasons.

The most common is that the person misunderstands wound ballistics.  He wants to exchange his hollowpoints for deeper penetrating ball ammo so that he can ensure adequate penetration through heavy clothing.  It’s a good thought, but bullets don’t really work that way.

Take a look at the chart below from Range Hot (click to enlarge).  It shows the results of their 9mm ballistic gelatin tests using a whole bunch of different loads.  Take a look at the difference in penetration between the rounds fired into bare gel versus those fired through three layers of clothing before hitting the gel block.  In almost every case, the hollowpoint bullets penetrated DEEPER, even after going through multiple layers of denim clothing. 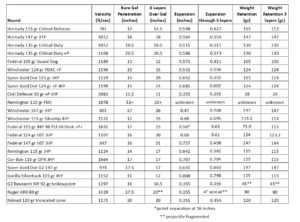 Your hollowpoint bullet doesn’t get stopped by clothing.  The hollow cavity actually gets partially or fully plugged by the clothing material.  When that happens, the bullet expands less and thus penetrates more deeply.  You don’t need to switch your hollowpoint for a deeper penetrating ball round.  Almost all hollowpoint bullets will automatically penetrate deeper when shot through heavy clothing.

As a side note, the more expensive and best designed hollowpoints tend to have fewer variations in performance between bare gelatin, heavy clothing, and other intermediate barriers.  That’s why the higher end defensive ammunition costs more.  When you pay for a Federal HST, a Speer Gold Dot, or a Winchester Ranger round, you are paying for better performance.  These rounds are less likely to plug up and more likely to perform as desired through all test mediums.  If you are already carrying a quality round like the ones I mentioned, there is no need to trade it out for a “deeper penetrating” bullet when cold weather hits.

Another group of folks want to change to some type of expanding full metal jacket or polymer tipped bullet during colder months because they think that any hollowpoint is more likely to clog with clothing and fail to expand when shot through heavy winter clothes.  This rationale makes more sense to me than wanting a deeper penetrating bullet, but the theory is still somewhat misguided in my opinion.

Expanding full metal jacket bullets often do not expand as large as a good jacketed hollowpoint, but they remain fairly consistent throughout both bare gelatin and through heavy clothing.  Some folks think that they would rather take the chance of less overall expansion in a round that is guaranteed NOT to clog up with clothing and fail to expand at all.  Take a look at the heavy clothing gel testing results from the Federal EFMJ bullet as reported on Federal’s website.

The expanding full metal jacket performed adequately.  Now take another look at the heavy clothing tests in the first chart.  The best 9mm hollowpoints consistently outperformed the EFMJ, even when shot through heavy clothes.  The Hornady Critical Defense round with the polymer tip is also designed to resist being plugged up by clothing.  It performed adequately as well.  But it didn’t perform significantly better than the quality hollowpoints I mentioned earlier.

The bottom line is that the polymer tipped and EFMJ bullets do fine in heavy clothing, but they don’t perform significantly better than other quality hollowpoints.  Both of these rounds will out perform any brand’s generic hollowpoint defensive rounds.  If that generic round is what you choose to carry defensively, a switch in winter might make sense.

A better solution is to pick one of the top performing defensive loads in your caliber and just stick with it year round.  That’s the strategy I employ.  I don’t switch bullets in colder weather.

Research the ballistic performance of your chosen carry load.  The Lucky Gunner Gel Tests are a great resource to find out how your chosen load performs.  If your load doesn’t do well in heavy clothing, exchange it for a load that does.  Pick a quality round that performs well in both bare gelatin and with heavy clothing and stick with it year round.  You don’t need ball ammo or something exotic just because it’s winter time.