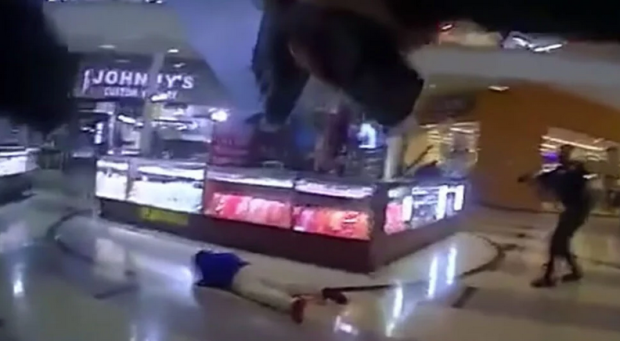 I haven’t written a new Tactical Training Scenario post in quite a while.  I missed providing quality analysis of real-life criminal attacks and giving you folks good advice about how best to avoid or survive those attacks.  The idea of this series of posts (see Tactical Training Scenarios links to other similar articles) is to get you to think about a certain contemporaneous tactical scenario and provide guidance about what you might do to avoid the situation or to prevail if your avoidance methods fail.

I saw this video of an officer responding to an active killer call in a shopping mall and realized that it would be a useful addition to my Tactical Training Scenario series.  Even if you aren’t a police officer, this information will also be useful to you if shots start breaking out during your next trip to the mall.

First, let’s take a quick look at the video.  It shows how the first arriving officer handled the call.  Watch the video below and think about how you might act in a similar situation.

Let’s work through the incident.

The entry decision– The video starts as the officer arrives on scene and begins talking with a mall security officer.  As he is doing this, I remember screaming at the computer “Go in!  Go in!”  When officers delay making entry on active killer situations, the body counts sky rocket.  At the one minute mark in the video, the officer tells the security guard “I need someone to go with me.  I can’t just go in by myself.”

That’s utter bullshit.  When people’s lives are in danger, you make entry.  Period.  Go in, even if your backup hasn’t yet arrived.

But as I continued to watch, I realize that I might not haven’t have made entry myself after getting the information the security guard originally reported.  There were no audible gunshots being fired.  There weren’t a mass of escaping victims.  The security guard reported a man with a gun, but didn’t mention him firing shots or that anyone was in danger of dying without medical intervention.  In that scenario, the best solution is to wait for backup before making entry.

At around the 1:45 mark, the security guard tells the officer that the perpetrator shot an off duty officer in the mall at least eight times and then stole the dead officer’s pistol.  That changes the situation immeasurably.  At  1:45  the officer decides to make entry alone.

The security guard should have reported a downed officer on the initial 911 call.  He should have also urgently told the responding uniformed officer that shots had been fired and there were people inside who needed immediate medical care.  That would have sped up the response option.

The responding officer chose to wait outside until he heard the information he needed to make a better decision.  If someone is mortally wounded, that is the first thing you should be telling responding officers.  This isn’t an item you wait more than a minute to declare.  After learning that an officer had been shot, at 1:45 the responding officer chose to make immediate entry alone.  That was a good move.  He should have also told dispatch what door he was entering, where the crime scene occurred, and where medics should stage.  He didn’t do any of those things.

Getting Intel on Attacker’s Location– The officer was unfamiliar with the mall and didn’t know how to find the store where the officer was shot.  That’s unacceptable.  If you work a patrol district, it is incredibly important for you to get out of your car and walk around the area you patrol.  You need to understand where certain stores are located and how to get to them quickly.

This officer didn’t know where the store in question was located.  That created an unnecessary delay.  The officer should have been familiar enough with the mall that he could find a store without instructions.  My cop friends need to get out of the cruiser when the job isn’t busy and tour their patrol district on foot.  That responding officer should have known exactly where the Cassanova store was located and should have made immediate entry while moving to that location.

If I had been that officer, I would have asked one of the security guards to personally guide me to the crime scene.  They may refuse.  But they also may accept the challenge and get you to the crime scene much more quickly.

We often talk about “running to the sound of gunfire”  in active shooter response, but what if there is no gunfire going on?  Looking for smoke, dust (coming from ceiling panels jiggled by muzzle blasts), or blood may be necessary.  Absent those indicators, first responders must interview fleeing victims to get intelligence about the killer’s location.  The officer did a good job here.  After talking to the folks in the mall, I would have likely told them to flee the area.  I want as few innocent bystanders as possible around a potential gunfight location.

The Reanimation- The officer locates the suspect, who then disobeys the officer’s verbal commands and charges him with a knife.  At 3:34, the officer fires five rounds at the man.  The suspect falls to the ground unconscious.  Fifteen seconds later, the man regains consciousness, stands up, and begins walking away from the officer.

This phenomenon happens fairly regularly and few people consider it in their response plans.  People drop unconscious after being shot due to a rapid loss in blood pressure.  Not enough blood is getting to the brain to sustain function.  When they fall, the heart no longer has to fight gravity to get oxygenated blood to the brain.  Even with a lower blood pressure, the brain again becomes perfused with oxygenated blood.  People then “wake up” and are often fully capable of sustaining violent action for a short period of time.

It is for this reason that I don’t think it’s a good idea to immediately approach a downed attacker.  If he had been still armed, he could have easily shot the officers who had approached him.  After your shooting, don’t rush in to secure your attacker, disarm him. or provide medical aid.