Violent protests, mob action, and rioting scenarios fill up your news feed.  Lots of folks are contacting me about mob violence issues.  Let’s look at some of the issues involved…   To date, the majority of mob violence events have occurred in very large public gatherings and at the sites of large political protests. […] 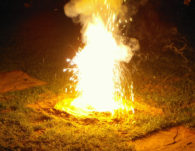 Links to some of the best information on the web.  If you have some free time, check them out this weekend.   Making Thermite…And It Is Perfectly Legal A tutorial about making thermite, an incendiary compound that will burn through metal.  Why would you need something like this?  Many tactical manuals (like this one) advocate […]