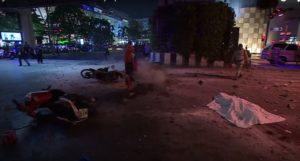 In case you missed the news, on Monday evening a bomb was detonated in a popular tourist area in Bangkok, Thailand.  On one of my trips there, I stayed in the neighborhood where the bombing occurred.  You may not care about what happens in a country thousands of miles from home, but you should pay attention to the tactics used here.

The bombing tactics were identical to those used by the Boston Marathon bombers, the London Bus bombers, the Philippine restaurant bomber, the Madrid train bombers, the Olympic Park bomber, the Volgograd train station bomber, and several other recent attacks.  In all of these events, the bomber carries the bomb in a large backpack.  He places the pack on the ground in a public area, opens the pack to arm the bomb, and then discretely walks away, leaving the bomb to blow up.  Several other similar packages are left in the area as secondary devices designed to kill fire and police officers responding to the scene of the first bombing.

In this case, the bomber used two accomplices to stand in front of him and shield his actions while he armed the bomb.  Be alert for anyone carrying large backpacks in areas where backpacks aren’t commonly seen.  Be alert for anyone leaving a pack on the ground and walking away.  Be especially alert for multiple people acting in concert or suspiciously around any type of bag or luggage.  This type of bombing isn’t likely to be prevented.  It’s up to you to recognize the danger and get yourself to safety.  Read my article Armed Citizen Response to the Terrorist Bomber for more information about what to do in a terrorist bombing attack.

If you want even more articles about how bombers work, check out the following links: