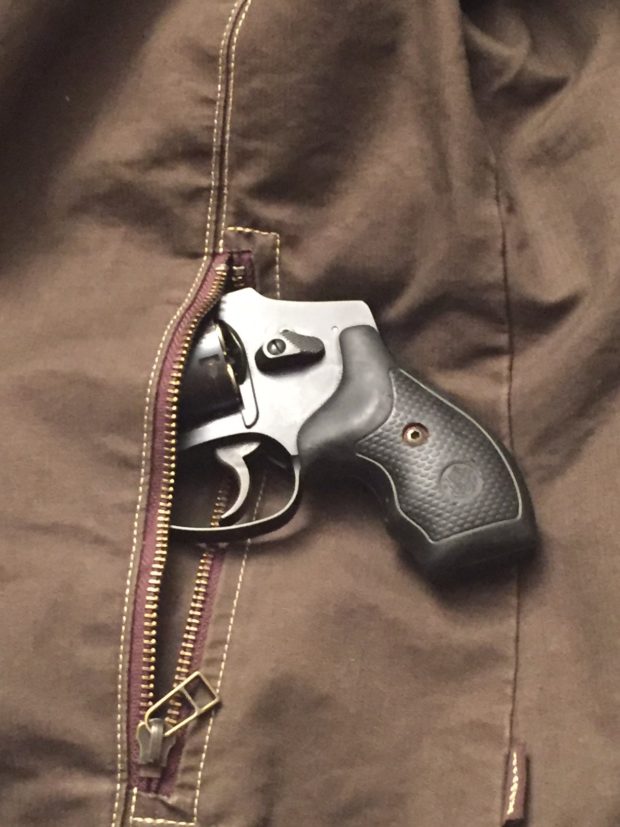 The weather is starting to get colder.  Many of you folks will soon be wearing large winter coats.  Have you ever tried to draw your defensive firearm while you are bundled up in a winter parka?  Sometimes it’s harder than one might think.

A friend recently sent me an email asking for some winter coat carry advice.  He normally carries a 9mm Glock 19 inside the waistband.  He lives in Minnesota and found access to his Glock to be rather difficult when the gun is covered up by his heavy winter coat.  My friend wanted to supplement his Glock with a smaller pistol carried in his outside coat pocket for quicker access in cold temperatures.  Which pistol would be the best choice?

That’s a good question.  I regularly carry a pistol in an outside coat pocket and have some thoughts on the subject.

Most of you carry autopistols for defensive purposes these days, but they don’t make very good pocket guns.  If you have to fire the gun from inside the pocket, there is a good chance that the reciprocating slide will catch on some part of the pocket and cause a malfunction.  Revolvers are less likely to jam.

While almost any revolver will be a decent choice, a short barrelled revolver with a shrouded or hammerless design is probably best.  There is a small chance that a gun with an exposed hammer could catch in the clothing pocket when attempting to draw the weapon.  It’s not likely, but there is also a small chance that a piece of clothing material slips down in between the hammer and the frame during the firing cycle as well.

If you are going to pocket carry, make it a revolver (ideally a hammerless revolver).

There are quite a few defensive cartridge options.  Most will work, but there are a few special considerations that must be considered before choosing a pocket pistol caliber.  The first consideration is recoil control.  When firing from the pocket, you are forced to shoot one-handed.  If you have any difficulty controlling recoil when shooting your gun with two hands, the issue will be even more pronounced when firing one-handed from the pocket.  For me, that eliminates the .357 magnum from consideration.

If we take the .357 out of consideration, other currently produced snub revolver cartridges are the 9mm, .38 special, .22 magnum, and .22 long rifle.  Looking at these options brings us to an additional pocket-specific caliber issue.  That issue is muzzle blast.  If your gun shoots a big flaming fireball every time you pull the trigger, you may have some problems shooting from the pocket.  I’ve had several students in classes actually set their coats on fire from excessive muzzle flash when shooting from a pocket.  Not good.

Of our remaining cartridges, the 9mm and the .22 magnum tend to have the most muzzle flash.  I would generally avoid using those rounds in a pocket-carried gun unless you are using rounds loaded with a special low-flash gunpowder.

We are left with the .22 long rifle and the .38 special for contenders as the pocket carry champion.  I think either weapon could be a good option.  If one is exceptionally recoil sensitive, the .22 might be a good choice.  The .22 might also be a good option if capacity is an issue.  Revolvers are slow to reload.  If you are only carrying one gun, having eight rounds is better than having five rounds.  As this gun is intended to be a backup to a belt-carried primary weapon, capacity isn’t as important.  If my pocket gun was backed up by a Glock 19, I’d choose the .38 over the .22 for better stopping power.

Weight is a big issue for pocket carry

I’ve spent the last couple weeks carrying a whole bunch of different snub nosed revolvers in my outside coat pocket.  I was amazed at how much the weight of the gun made a difference in printing and carrying comfort.  If the coat was unbuttoned, a heavier gun became very obvious when placed in an outer coat pocket.  The heavy gun drug one side of the coat down a couple inches lower that the side without the gun.

I weighed all of the guns under consideration on a postal scale.  I weighed them while fully loaded with defensive ammunition.   I had the exact same grips (Uncle Mike’s rubber boot grips) on all the Smith and Wesson revolvers for consistency purposes.   Here are my results:

In carrying these guns, I found a tremendous difference between the aluminum frame guns and the steel frame guns when the guns are put in an outside pocket.  Obviously, every person and every coat is different, but I found that the guns weighing more than 20 ounces were consistently harder to conceal.

Factoring in all the variables of recoil, capacity, muzzle flash and weight, I think the best choice for coat pocket carry is either the Smith and Wesson airweight 442/642 or the Ruger LCR.  Both are great choices.  The heavier guns and the magnum calibers are noticeably less useful for coat pocket carry.  The super light .38s (like the 342) are nice to carry, but recoil is much harder to control.  It seems that the airweight style .38s are the best compromise for pocket carry.

I recommend the Speer Gold Dot 135 grain short barrel hollowpoint as the best defensive load.  If the recoil is too stout with the Gold Dot, the plain old 148 grain target wadcutter round creates a full caliber hole and adequate penetration in flesh.  It also has very low recoil.

If you are carrying in a coat pocket, make sure you use a pocket holster.  There are lots of good ones on the market.  My favorite is the DeSantis Nemesis or Superfly.  Both holsters are inexpensive and hold up well.

My last suggestion is that if you choose to carry in a coat pocket holster, you should actually try shooting through the pocket at the range.  Pick up a few cheap coats at a thrift store and practice shooting the gun from a pocket.  It’s a worthwhile training exercise. 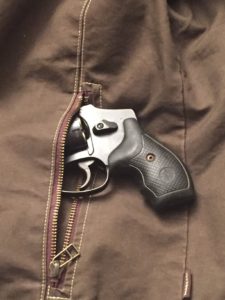