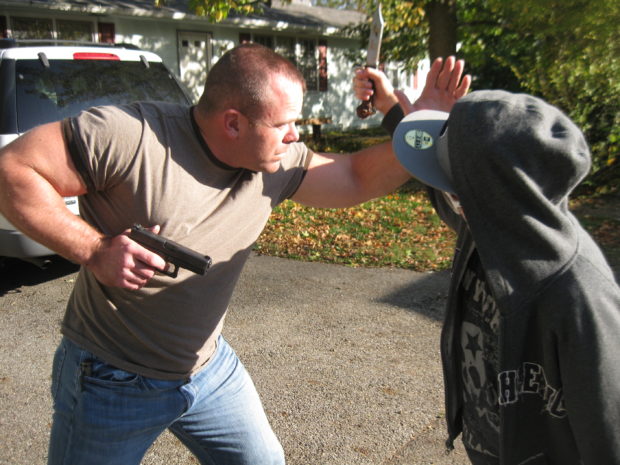 Think about your last firearms training session.  From which distance did you spend the majority of your time shooting?

When you visualize possible scenarios when you might have to defend yourself with a firearm, how far do you imagine the criminal shooting at you will be?

If you are like most shooters, you tend to both practice for and imagine scenarios that are far different from what actually occurs.  Most shooters visualize gunfights happening with advanced warning and a safe cushion of distance between themselves and their attackers.  They practice for this same event, shooting at 20, 30, or 40 feet away from the target.  Unfortunately, that isn’t enough.

There aren’t many concrete studies of the distances involved in armed citizen gunfights.  We do, however have extensive research from the FBI and other Federal Agencies about police involved shootings.  That research indicates that about half of all law enforcement shooting deaths occur at distances of five feet or less.  Most trainers estimate that altercations between criminals and armed citizens happen on average EVEN CLOSER.

Extending the gun into a traditional shooting stance while within arms reach of your attacker is a recipe for being disarmed.  Close range attacks require a different skill set…one that most shooters don’t practice nearly enough.

Think it won’t happen to you?  What about the recent Martin/Zimmerman shooting in Florida?  In that attack, Zimmerman was on the ground with Martin straddling him and striking him in the head when he made the shot.  That’s close range!  And events like that happen every day.

The two shootings below help illustrate some of the problems one might have in a close range encounter.  The first was a police shooting that started after a physical altercation.  During the struggle, the criminal disarmed one of the deputies and tried to shoot him.  The deputy was locked in a hand-to-hand struggle with the murderer and was able to deflect the muzzle of his gun upwards before the criminal fired.  The deputy then drew his backup pistol and shot the criminal.  Read more about it here: Deputies fatally shoot man in Palmdale after a struggle.

“During the fight, the suspect gained control of one of the deputies’ duty weapon and pointed it at him,” the statement read. “The deputy quickly pushed the suspect’s hands upward and at that moment the suspect fired at least one shot into the air.”

No one was struck by that gunfire.

“The suspect was struck multiple times in the upper torso; he collapsed and dropped the deputy’s duty weapon,” the statement said.”

This could have just as easily happened to an armed citizen.  Occasionally, gunfights start off as physical struggles and most shooters don’t have the skills necessary to win that kind of fight.  Here are some things you should be thinking about for your next training session:

– Do you know how to shoot from the retention position so that your gun isn’t taken from you by your attacker at close range?  Maybe you should spend some time working on those techniques to ensure that your weapon won’t jam and you can get good quality hits without endangering yourself and others.

Extending your gun in a situation like this will likely result in it getting taken from you. Have you practiced shooting from a retention position like this?

– Do you know how to retain your pistol if it is grabbed in a fight?  You need to have skills to keep your pistol in its holster should it be grabbed by your attacker. 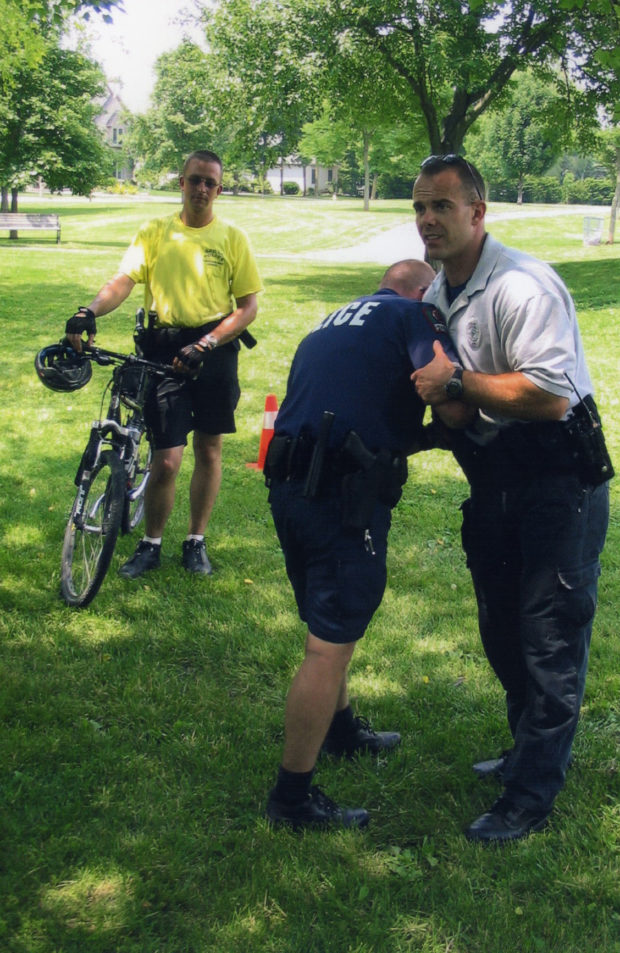 – Do you integrate empty hand fighting in with your pistol practice?  It would be a good idea in your next shooting session to have a partner hold a striking pad near the firing line.  With a holstered weapon, begin striking the pad as hard as possible.  Continue for about 30 seconds then draw and shoot your target.  Repeat several times.

– Do you carry a backup gun?  Do you practice transitioning from your primary to your backup in the event that you run out of ammunition, are disarmed, or have a serious malfunction?

If you need additional reasons to carry a backup gun, read the story HERE.  An officer was physically attacked by a man she had already shot once.  As she was retreating, she fell and dropped her gun.  The attacker picked up the dropped gun and began shooting her with it.  She didn’t have the physical abilities to take her gun back or a backup weapon with which to continue the fight.

Anyone can fall down in a gunfight.  If you fall, you might drop your gun.  Wouldn’t it be nice to have a spare?

“Wright said even after the masked men entered the restaurant, the concealed weapons holder waited until the robbers began ordering customers to the floor and employees into the back – while waving a gun – to act. After pulling his .45-caliber Glock, the customer ordered the men to stay put until deputies arrived. Only after Williams pointed his Hi-Point 9mm at the man, did the customer fire, Wright said.

After struggling with the customer, the other suspect fled the restaurant and has not yet been identified. One shot was fired by the customer during that confrontation, but only after the masked man tried to grab the gun, the sheriff said.”

– When was the last time you practiced shooting multiple targets from oblique angles?  How about practicing integrating a scan for additional attackers after you shoot?

– Not only do you need to practice in-holster weapon retention, you also need to know what to do if your attacker grabs your gun while it is in your hand.  Just pulling the trigger may not be enough if your slide is knocked out of battery or your muzzle is averted. 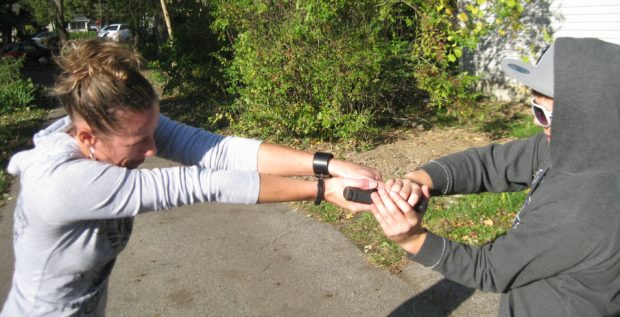 Pay attention to the full variety of shooting situations that can occur.  Make sure you practice to prevail in them all.