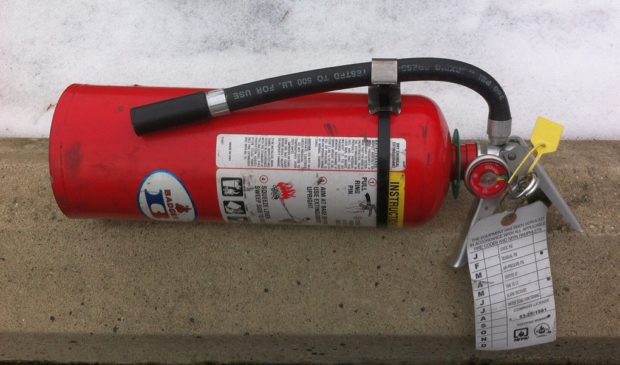 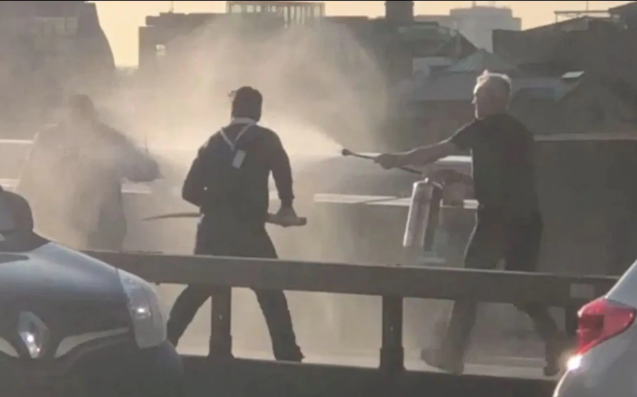 Fire extinguishers are often advocated as weapons in areas where “normal” weapons can’t be carried, yet few instructors teach folks how to use them effectively in that role.

In a terrorist or active killer attack, setting up an ambush and using the fire extinguisher to strike the terrorist from behind probably has the best chance of success.  But if the encounter is face to face, without the element of surprise, the fire extinguisher might not be the best weapon for a single defender working against an armed opponent.

I don’t think I would use the fire extinguisher as an impact weapon against an armed attacker because I need two hands to effectively wield it. Unless you can get him from behind and knock him out instantly (not likely), I would rather have at least one hand to deflect and control his knife arm or the muzzle of his gun. If I have two hands on the fire extinguisher, I can’t do that. I’m betting on a knockout and if that doesn’t happen, I get shot. I don’t like those odds.

The spray from the extinguisher is a very dense powder. It would certainly blind the person sprayed and make them cough uncontrollably.  Similar to the teamwork displayed in the London attack, to optimize its effectiveness, I would enlist the help of at least one or two confederates. I would spray the terrorist until the extinguisher was empty and then start beating the dude with it. As I do that, my two confederates would both work to take the gun/knife away.  I think that plan has a reasonable likelihood of success. 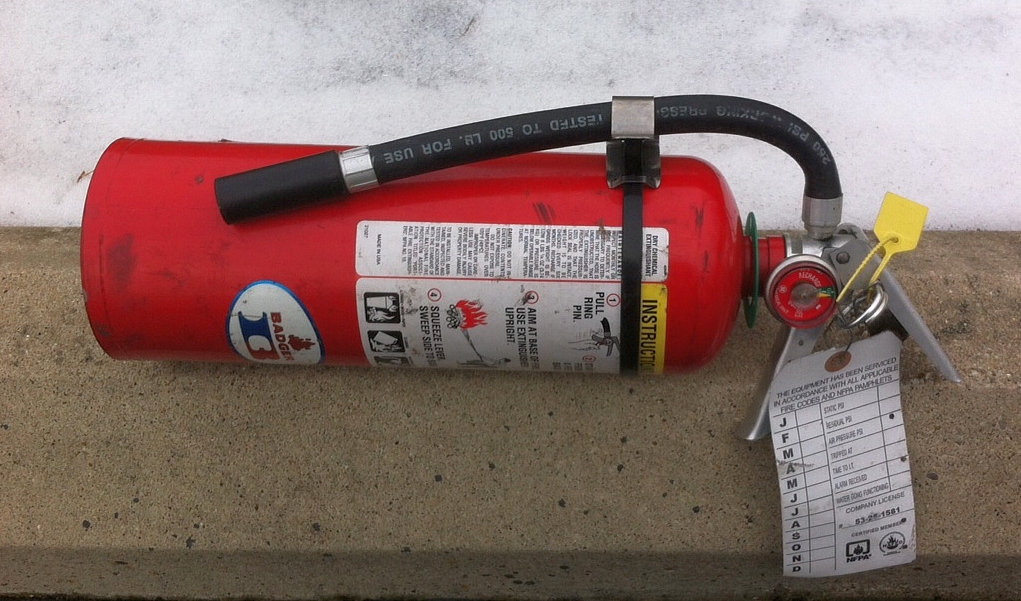 Keep the hose attached to the body just like this. Spray and then thrust with the bottom of the extinguisher’s body.

In another effective counterattack, one person sprays, one person tackles, and one person gets the weapon. The tackler would be hard to stop because most people don’t practice tracking targets moving towards them when shooting their guns in practice. It’s tough to hit this kind of moving target even with practice. It would be almost impossible with a face full of fire extinguisher powder.  The tackling defender would serve to keep the terrorist from creating distance by turning and running when the spray is deployed.  It would be difficult to stop this kind of attack.

When the extinguisher is empty, besides thrusting, you can also swing the canister by the handle, using the body of the fire extinguisher as an impact weapon.  Depending on the size of the canister, this movement will likely take some strength to perform effectively.  It will also take a little bit of space and may not work in a tight location.

Use a pivoting swing technique similar to the way cops once swung their side handle PR-24 batons.  Hold the handle in your strong hand with a relaxed grip.  Swing the canister over your head or from side to side, allowing the handle to rotate in your hand.  Take a look at the short PR-24 video below to illustrate the technique.

This technique is best used by a strong defender in an open area as a finishing or knock out technique on an already stunned attacker.  If the defender used it as an opening move without distraction, the wide swinging nature of the attack might make it easy for the terrorist to block or evade.

Sometimes we are limited in the weapons we can carry.  Almost every public building has multiple fire extinguishers.  It’s probably a smart idea to consider how to best utilize them as an option for defensive weaponry.