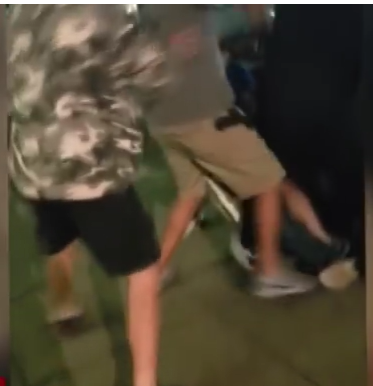 I’ve seen some stunning examples of irresponsible behavior by gun owners lately.  All made the nationals news; which, as a gun carrier, you should try to avoid.  All of them involved carrying a gun in a faulty holster or carrying without a holster at all.

Let’s look at a couple of these cases:

Case #1 Dancing FBI Agent.  You’ve likely all seen this one.  If not, read the linked article and watch the short video below.

The agent is clearly carrying in the small of his back (a horrible idea) in a holster that doesn’t have enough retention for his planned activities (backflips and dancing).  The gun goes flying.  He negligently shoots another bar patron as he picks up the gun to put it back in the holster.

Case #2 The IKEA shooting.  A man shopping at the furniture store was carrying a KelTec P3AT in his front pocket without a holster.  He sat down on a couch while shopping.  According to this article:

“He also told police that he was wearing shorts with pockets that were “shallow and unsafe.”

The suspect told police that the gun likely fell out of his pocket as he crossed his legs while sitting on the couch.”

The gun fell out of the man’s pocket and he didn’t even notice.  A young boy found the gun and pulled the trigger.  Luckily, only a couch was damaged and no one was injured.

Case #3 The Portland Fight Police shooting.  This is another tale of a falling gun. Take a look at the photo below.  The man with the khaki shorts seems to be carrying a gun in a holster stuck in his front pocket.  The man is attempting to break up a fight outside a bar when his gun fell out of his pocket. 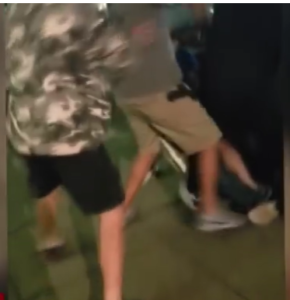 “The man who died tried to intervene and de-escalate the fight, which involved a friend of his. While doing this, a gun holstered on his hip fell out. He went to pick it up and shots rang out, Smith said.”

Police arrived as the man was picking up the gun from the ground in the middle of a chaotic fight between several people.  Police shot the man.  For more information, read this article and watch the video below.

All of these events have negative outcomes.  While only one was fatal, failure to carry the weapon in a quality holster will likely cost an FBI agent his job and is leading to felony charges against the man who dropped his gun at the IKEA store.

I’m assuming that you don’t want to end up like any of these guys.  To avoid a similar negative outcome, you need to carry your gun in a quality holster.  No, the nylon sausage sack you bought at the gun show for $20 does not qualify.  As a review for my readers, a quality holster has the following characteristics:

Should not be “one size fits all.”  With few exceptions, holsters designed to fit multiple guns don’t fit any of them well.  Buy a holster designed to fit your exact concealed carry piece.  For an example of this issue being a problem, read this horror story about a man who accidentally shot himself in the restroom of a retail store.  He had stuffed paper around his gun inside the holster to make the gun fit better.

Spending a few extra dollars on a holster that fits your gun is far cheaper than paying the bill for the surgical repair of a bullet wound caused by packing wadded up pieces of paper around your gun inside its holster.

Should cover the trigger guard.  No part of the trigger should be exposed when the gun is holstered.

Material should not allow trigger to be pulled from the outside.  In addition to the trigger being covered, it needs to be covered with a material thick or rigid enough to prevent the trigger from being pulled through the fabric.  A lot of “belly band” style holsters fail this test.

You should be able to re-holster one handed.  A lot of cheap inside the waistband holsters collapse when the gun is drawn.  That’s bad.  In order to reholster the gun, you will have to either remove the holster or hold the holster mouth open with your off hand while reholstering.  Both are undesirable.  Muzzling your own hand while reholstering is a perfect setup for yet another possible negative outcome.

Buy a holster with a reinforced mouth that won’t collapse.

You must be able to get a firing grip on the pistol while it is in the holster.  If the holster rides too low or has a lot of extra material around the trigger guard, you can’t actually get a firing grip on the gun while it is holstered.  That means you will have to adjust your grip while drawing.  Adjusting your grip during the drawstroke slows you down and provides an opportunity for you to drop your weapon.

Buy a holster that supports a firing grip on the weapon when it is secured.

The holster must have enough retention to support all anticipated activities.  This includes backflips and fighting.  I know what you are thinking: “If I get in a fight violent enough to dislodge my gun from its holster, I’ll be drawing the gun to shoot.”

Really?  What about the guy who got involved in a struggle while just trying to break up a fight outside the bar?  I bet he never expected to be involved in a violent struggle, yet he was.  And he paid with his life when he lost his gun.

Make sure your gun doesn’t fall out of your holster when you run, jump, fight, or roll.  A quality holster should hold the gun securely during these activities.

Evaluate how you last carried your gun.  Does your holster meet the standards I described above?  If not, fix your shit.  That $20 gun store holster may get you killed or charged with a felony.

If you want some suggestions on good holsters, check out my guide to good holster options for concealed carry.