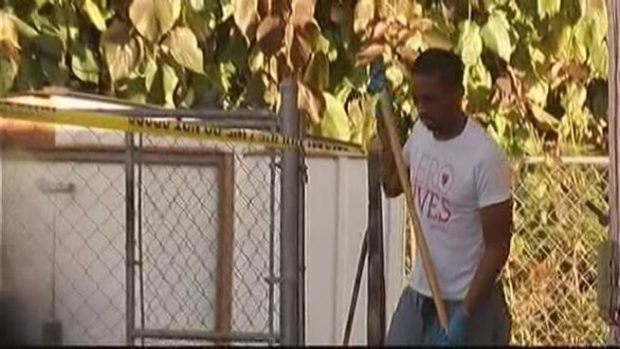 It’s five a.m. and you hear a commotion outside your house.  You go outside to see what’s happening and you see a completely naked man trying to choke your dog to death.  What would you do?

The homeowner in this instance shot the man in the leg and held him for police.  Read more about it by clicking on the link below:

Was the shooting justified?  Would you shoot to protect your pet?

There are exceptions.  Some states allow deadly force to be used to protect property in certain situations.  Check out your state’s laws if you have any doubts.  Castle Doctrine laws may also protect you if you shoot someone who is attacking your pet inside your house.  Again, check your state’s laws.

This shooting occurred outside the house.  Why was it considered justified?  Read the police officer’s statement…

“…at the point that the homeowner attempted to get this individual’s attention, he immediately jumped onto the owner and started fighting with him.”

If you don’t read the article closely, you might get the impression that shooting to save the dog’s life is justified.  It is not.  This shooting was considered justified because the naked man attacked the homeowner.  The homeowner shot to protect HIMSELF, not the dog.  There’s a big difference.

I realize that many of you consider your pets “part of the family”.  I also realize that you may consider the life of your pet more important than the life of a criminal who attacks it.  I  have a dog too.  I truly understand.  But the law doesn’t care.  Pets are property in most states.  Understand this concept and don’t risk going to jail for an unjustified shooting.

If you are a pet owner, your homework assignment is to think about this scenario.  What would you do in the event that someone attacks your pet?  What about if another animal attacks your pet?

Physical force (non deadly) is allowable under most states’ laws.  Are you physically skilled enough to defend your animal?  If not, pepper spray or an impact weapon might make a better choice.  Pepper spray works against most dogs.  I carry it without fail whenever I walk my mutt.  I’m less worried about being attacked myself (especially while walking my scarred-up 75-pound rescue American Bulldog), but I worry about my dog being attacked by another pet.  A quick blast of pepper spray will usually solve the problem with minimal chance of harm to either animal.

I’ve responded to two different calls in my police career about dogs attacking people.  In both cases I arrived quickly enough to see the attack taking place.  In both cases, I drew my collapsible baton and started swinging.  Both attacking dogs ran off and I was then able to aid the victim.  In my admittedly small number of experiences, I’ve found the baton quite effective.  A nice cane or walking stick would be an alternative if collapsible batons are illegal to carry in your state.  Either would also be effective (and likely legal) against a human attacker who tries to harm your animal. 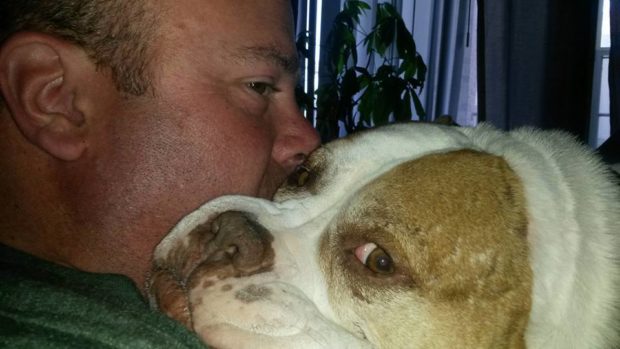 Cuddling with our one-eared rescue mutt.