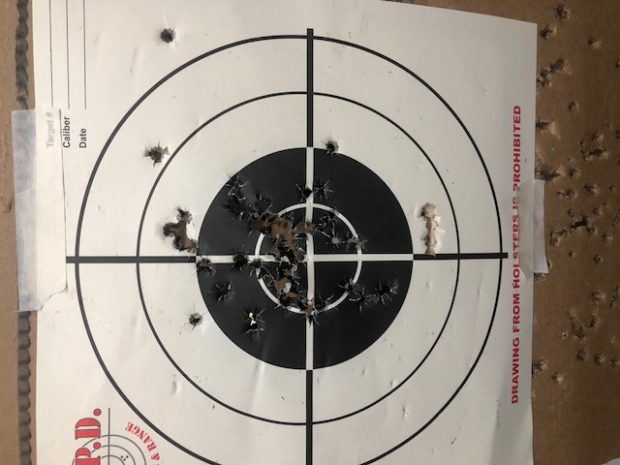 I’ve been slacking a bit lately.  I normally try to practice at least once a week.  Due to some family medical problems, my free time has been a bit tighter than usual for the last six weeks.  My weekly shooting has degraded to just two sessions in the last month and a half.  This session was the first time I had shot in three weeks.

My stated practice plan this year was to begin each session with the Guerilla Approach Consistency Drill.  I ran the drill twice with my Glock 17 duty gun.  I expected horrible performance but I didn’t do as badly as I expected. 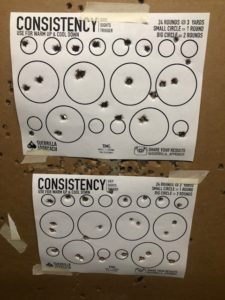 I ran the drill as designed twice (with times of 8.75 and 8.8 seconds).  I then ran it as 6-2-2 with six rounds fired two handed, two rounds right hand only, and two rounds left hand only.  I didn’t make the time goal with that version, shooting it in 11.64 seconds.

I then ran the drill two more times, adding a reload to each string of fire.  I barely made the par time, shooting 9.99 and 9.64 seconds. 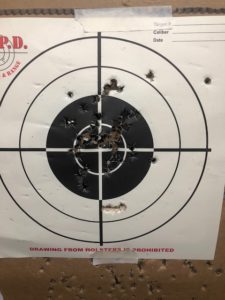 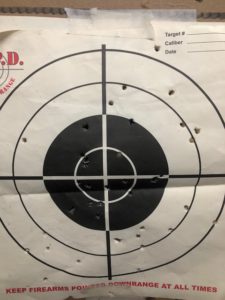 My 10-10-10 target with the .22 mag snubnose. Note the significantly larger group than the target I shot with my G17.

I finished up test firing some rounds I wanted to try for low noise/ low penetration injured animal destruction.  For what it’s worth, neither the low noise “quiet” CCI .22 rounds nor the CCI .22 shotshells cycled the slide on my Ruger SR22 pistol.