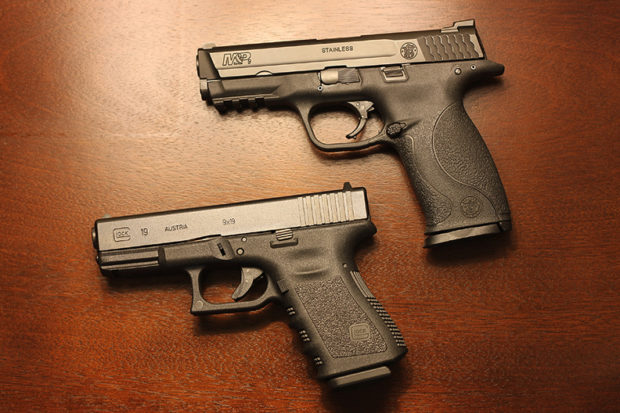 It’s like clockwork.  At least once a week, I open my email and see some version of the following question:

“I’m worried about (your choice: crime, the declining economy, right wing politicians, mutant zombies, societal collapse, left wing politicians, etc) and want to buy a gun.  I don’t have any experience or training with firearms.  What should I get?”

It’s a good question and I applaud those who have asked it for seeking quality information before making such an important decision.  The biggest challenge is the fact that there are LOTS of quality firearms and the “right” answer depends a lot on a person’s individual tastes and mission.  Let’s take a look at some of my recommendations:

This is the first decision you’ll have to make.  Well meaning friends often advise that shotguns are best for first guns because they are very powerful, don’t have to be aimed, and can also be used for hunting.  Some of those statements are true and some are wild exaggerations.

Even with these admirable qualities, I don’t think the shotgun is the ideal FIRST weapon.  It is powerful, but the blast and recoil are very intimidating to first time shooters.  Besides that, it isn’t very portable or concealable.

For a first gun, you want something versatile.  You may only be interested in home protection right now, but in the future you may want to actually carry the weapon out in public.  Unless you are walking through the hunting fields, the shotgun doesn’t make a good public carry weapon.  Even if you never plan on carrying a weapon out in public, you may have to carry it around your house.  Trust me when I say that it is difficult and tiring to search for criminals inside a building while carrying a shotgun.  The long barrel makes it difficult to open and close doors and gives your position away when it extends around a corner before you do.

Some say: “I would never search my house for criminals, so I’ll be fine with a shotgun at home.”  That may be true, but do you have small children?  How do you protect your children if you hear a noise in the house?  Have you ever tried moving into your “safe room” while carrying a sleeping child, phone, and shotgun at the same time?  It doesn’t work very well.  Rifles pose many of the same problems.

If you are moving around or carrying the weapon in public, you’ll want a handgun.  I have nothing against the shotgun or battle rifle (and own several of each), but I think the handgun is your best choice for a first weapon.  It is also much easier to find quality handgun training than training with the shotgun or rifle.  Practice will be easier as well since many public shooting ranges ONLY allow handguns.

And as a footnote, don’t buy a shotgun with pistol grips (no stock).  The pistol grip really doesn’t make it any more portable (it only cuts about 6” off of a 30+” gun) and exacerbates the already stiff recoil of the shotgun.  It also makes it very difficult to hit any targets that are beyond 20 feet away.  Save the pistol grip shotguns for the movies. 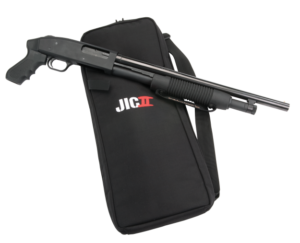 A very poor choice for a defensive shotgun

What type of handgun?

Now that we have settled on a handgun for your first weapon, you have some choices to make.  Revolver or Semi Automatic?  What caliber?  What size?  Again, the answers for these questions depend a lot on your personality and mission.  To make the proper decision, you need to answer two questions:

No matter what weapon you buy, it would be a good idea to seek some professional training.  Most shooting ranges offer introductory classes.  The National Rifle Association has some excellent training programs.  You may also want to take your state’s concealed carry license course as well.  Even if you don’t get a permit to carry, the course will generally be a good introduction to using your handgun in a combative encounter.

With that said, semi-automatic handguns require a little more initial training and more frequent practice than revolvers.  The more complex manual of arms just takes a little more time to master and fairly frequent practice session to maintain.  If you aren’t willing to practice at least four times a year, you probably shouldn’t get a semi-automatic.  Look at a revolver instead.

If you are willing to take on a slightly more complex challenge of initial learning and willing to practice regularly, a semi-automatic handgun will likely be a better choice for you.

Although no one wants to get shot with ANY handgun, some calibers are more effective at stopping violent attacks than others.  With that said, don’t buy into the hype about only trusting the most powerful handgun rounds (.44, .45) for protection.  The middle ground calibers of 9mm and .38 special are ideal candidates for your first gun.  They offer excellent stopping power, good concealabilty and minimal blast and recoil.  They are also much cheaper to shoot than some of the larger calibers.  Owning guns that are cheaper and easier to shoot generally means more practice, and that is critically important.  Hits are the only thing that matter in a gunfight.  A loud miss with a .45 isn’t as effective as any hit with a 9mm.

While a 9mm or .38 will work well for most people, some people are very recoil shy or too weak to handle even the minimal recoil these guns generate.  It’s better to try out several weapons and see what you like before purchasing one.  Most shooting ranges have rental guns, or you could ask your friends to borrow their guns to try.

If recoil is an issue, you may have to go to a smaller caliber, but that should affect only a very small percentage of people.  It’s better to take the time to master a gun that shoots an adequate self defense cartridge than take the chance that your smaller caliber weapon won’t do the job.

You’ve decided that you want a handgun, as well as the action type and caliber.  Next you’ll have to figure out exactly which gun would be best to buy.  In addition to working as the full time firearms instructor for my police department, I am also a staff instructor for one of the largest shooting schools in the country.  I’ve seen and shot just about every gun available and know which ones work.  More importantly I’ve seen which guns DON’T WORK!  Here are my recommendations:

If you want a semi-automatic pistol, you can’t go wrong with a 9mm Glock (Model 19 or 26) or Smith and Wesson M&P.  These guns are extremely reliable, hold lots of bullets, are relatively inexpensive, and offer adequate stopping power.  Everyone shoots well with one of these two guns!  It’s actually very hard to find a shooting instructor at one of the big name shooting schools that doesn’t use one of these two pistols. 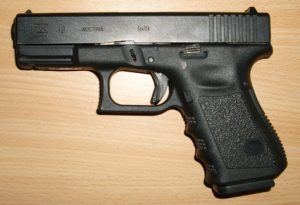 I personally like the Glock better, but I have many friends who prefer the M&P.  The M&P has an advantage if you have very small or large hands, as it has adjustable grip backstraps.  The Glock has a longer track record of reliability.  Both are great guns and you’ll be happy with either.  If you are thinking primarily of a home defense gun, get a larger Glock (Model 17 or 19) or Smith and Wesson M&P.  If you are going to carry the gun concealed, you may like the slightly smaller Glock 26 or Smith and Wesson M&P Compact better. 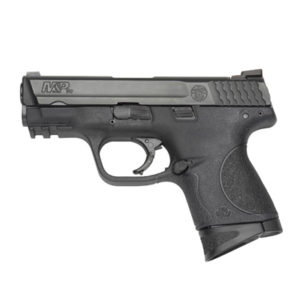 Don’t write to me and say “But internet guru so-and-so says he likes gun X.”  I don’t care.  And neither should you.  I’ve had many nationally- known gun writers and “experts” as students at the shooting school.  A lot of them don’t know any more than you do.  Most of the time, if someone is recommending a certain weapon type in a public forum; they are getting paid by the company to do it.  I’ve seen all the guns.  Some of them work, others don’t.  The guns I recommend above work better than anything else.

If you are looking for a revolver, choose a Smith and Wesson or a Ruger.  I prefer the Smith and Wesson because it generally has a better trigger and is made in a smaller size for concealment, but you’ll be happy with a Ruger as well.

You can buy a revolver chambered in .357 Magnum.  Any gun in that caliber will also shoot .38 special ammunition.  The .357 magnums will be about $150 more expensive and can be a little larger as well.  Either option will work.

If you are relying on the gun for home protection, don’t buy the smallest Smith and Wessons (called the J-Frames).  They are designed for maximum concealment and, as such, hold fewer rounds, are harder to shoot well, and have stiffer triggers.  There’s no need for an ultra-small gun if you aren’t going to conceal it.  Buy a mid sized Smith and Wesson (Models 10, 64, 19, 66) or Ruger (Security Six, GP-100, and SP-101) with a barrel length between 2 and 4 inches.  You can even find bargains on older used guns of this type for as low as $200.  You won’t be disappointed.

If you are going to carry the revolver daily, you may want a smaller one.  That’s where the smaller Rugers and the Smith and Wesson J-Frames shine.  You can find these guns in various weights.  Stay away from the titanium framed super light guns (Smith and Wesson calls the “Airlights”).  I’ve seen more problems with them than with their slightly heavier aluminum or steel cousins.  For daily carry, I like the shrouded hammer or hammerless revolvers from Smith and Wesson.  Take a look at models 642, 442, 638, and 640. 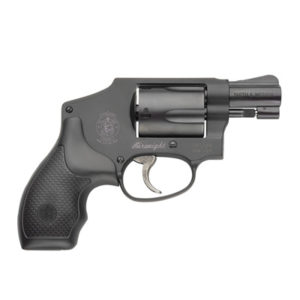 If you are extremely recoil shy, the Smith and Wesson Model 317 in .22 long rifle is a decent smaller caliber alternative.  I would stay away from most .22 caliber semi automatic pistols for defensive purposes.  The .22 cartridge is inherently less reliable than other larger calibers and is prone to jam in many semi-automatic pistols. 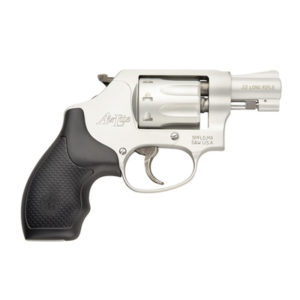 The 317 is a great (albeit expensive) choice for someone who is recoil shy or who wants to practice using cheap .22 ammunition. 8 rounds of high velocity .22 long rifle ammunition in a 10 oz package makes this a neat little gun.

So there it is.  A whole lot of writing to tell you to buy a boring Glock or Smith & Wesson auto pistol or an even more boring revolver.  Those guns may not have the glamor or sex appeal of some of the other models you are considering, but they work.   And they work under the most demanding conditions.  That’s the quality you need if you only have one gun. 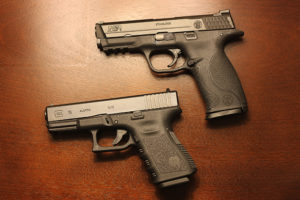