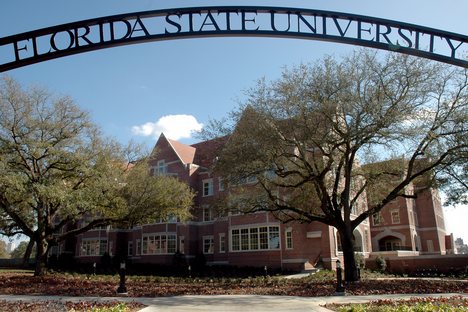 Early last Thursday morning (November 20), a mentally ill man entered the Strozier Library on the Florida State University campus and began shooting.  It was 12:30 am and approximately 100 students were studying in the library at the time.  The mentally ill man had complained to friends about government conspiracies and had told others that he was being targeted by some sort of invisible weapon.  Prior to the problems associated with his mental illness, the man had been an attorney and received his undergraduate degree from FSU.

The man started shooting outside the library with a .380 pistol.  He hit two students.  One of his victims was only grazed and immediately reported the incident to police.  After shooting the victims outside, the mentally ill man walked in to the library, allegedly firing a shot at student Jason Derfuss as they passed.  That shot hit Jason’s backpack and was stopped by a book he had just checked out of the library. 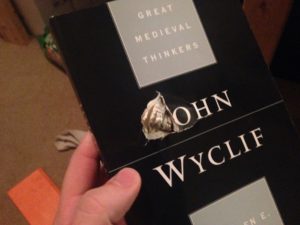 Photo posted to Jason Derfuss’ Facebook page showing the book that stopped the shooter’s round.

The gunman fired more rounds in the library and walked just outside the door, where he was met by police responding to the calls about shots fired.  The police officers ordered the gunman to drop his weapon.  Instead, the gunman fired a shot at the police.  Police returned fire, killing him at the entrance of the library.  Three people were injured by the shooter’s gunfire.  Thirty shots were fired in total (including the rounds fired by police).  The gunman had additional ammunition in his pockets when he was killed.

By all accounts, this crime seems to be somewhat out of character in comparison to most school shootings.  The shooter was extremely delusional and didn’t seem to have a plan.  No one knows why he chose Strozier Library or the three people he injured as targets.  Despite this fact, there are still a couple learning points from the incident.

1) Mentally ill university shooters seem to be attracted to libraries. When looking back at the history of University shootings in America, I  find more shootings in and around school libraries than any other location.  Students occasionally are killed in dorms and sometimes faculty members are killed in their offices.  But more shootings have occurred in the library than any other place on campus..  Take a look at the Cal State Fullerton Shooting, committed by a mentally ill janitor in the library.  The Lone Star College shooting occurred outside the library.   In 2010, a student at the University of Austin fired a magazine full of AK-47 rounds at students outside before entering the library and killing himself.  More recently, 10 people were shot when a killer opened fire on the library at Santa Monica College.  The Seattle Pacific College shootings also occurred in the library.

Having worked security in a library for more than 10 years, I can tell you that they seem to attract mentally ill people quite frequently.  I also know that most folks who work in libraries don’t like to think about violence.  Most libraries don’t drill active shooter escape/lockdown plans nearly enough.  If you work in or frequent a college library, ensure adequate emergency plans exist.  If you are studying in a school library, sit near a rear exit.  You want to be able to make a quick escape if someone comes in the main door shooting.

2) More and more active shooter events are beginning outside.  Many of the recent mass killings have started outside and then moved into a building.  Most cops don’t train in outdoor active shooter interdiction tactics if they train at all.  The majority of training happens inside schools and office buildings.  That has to change.  If you are a cop who is training your department, ensure that you give officers the skills to maneuver against killers firing outside as well as inside buildings.

3) Take a look at the time of the attack.  Most active killer attacks happen when schools are at their greatest capacity.  Knowing this, schools don’t often plan for contingencies late at night or when students are in transition.  I would bet that any lockdown/escape drills done at FSU prior to the shooting were done during the daytime.  That’s not good enough.  We need to train to deal with these killers at all times.

We are already seeing killers intentionally beginning their shooting sprees before school begins for the day, during lunch periods when students are moving around, or between classes.  They do this because the know that in the confusion created by students’ movements, they will encounter more victims.  I predict that the next evolution of tactics will be that students will target areas with a large population (like a library full of students studying for exams) during “non traditional” business hours.

4) Books make good improvised body armor.  I’ve been telling folks this fact for many years.  Books stop bullets.  That’s an important concept to understand when the shooting starts.  Whether that means using bookshelves for cover or throwing on a backpack loaded with books as you make an escape, you should always remember your “improvised body armor.”

5) Mental preparation is key.  A newspaper reporter interviewed several students who were in the library at the time of the shooting.  One student made a quick escape saying:

“You never think something like this is going to happen to you until you have to react in that situation when someone is screaming there is a gun in the building. I ran for my life,” she said. “I ran right out the backdoor. My laptop and everything is still in there. It was shock. It was just instinct. You don’t think about anything else, you just go.”

I would submit that her flight wasn’t just instinct.  It was a planned response at some level, conscious or not.  Contrast her statement with one from another student interviewed:

“I started shaking immediately. I didn’t stop shaking. In fact, I think I’m still shaking. Then I started tweeting. It was really hard to tweet while shaking, but I felt like people really needed to know what’s going on.”

One student fled to safety while one student shook and tweeted.  One strategy will generally lead to positive results in an active killer situation.  One will not.

It’s your choice.  Will you be a runner or a tweeter?