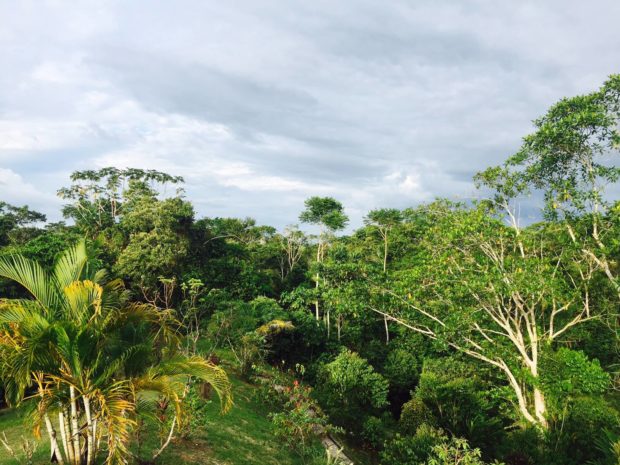 I just got home from an amazing 10-day trip to Peru.  Since a lot of you like reading about my travel adventures, I’ll talk a little about my trip and some of the security issues I encountered in South America.

This was my third trip to Peru.  I hiked the Inca Trail to Macchu Pichu in 2005.  That was my first solo trip to a foreign country.  I went back in 2015 to study plant medicine in the Amazon Jungle.

On this trip, I went back to the same place where I had studied in 2015 and completed their program focusing on both Amazonian and Andean plant medicines.  The insighst I received studying with both the local indigenous people and one of the single most experienced shamans in the world definitely caused me to re-think some things.  My experience provided some personal insights that will be exceptionally valuable in my life back here in the “real” world.

You can read the article linked above from my last trip if you are interested in crime and guns in Peru.  I discussed those issues thoroughly in that piece.  Here are some updates, things that have changed since 2015, and things I found interesting on this particular trip.

After a relatively comfortable 9-hour flight, I made it to Lima, Peru. After a day and a half there, I headed off into the jungle.

If you haven’t been to South America, one of the most consistently amusing aspects of travel there is that ALL of the taxi drivers (except those in Brazil and Colombia) listen to nothing but 1980s American pop songs on their car radios.

This trip’s taxi rides continued the trend. I was serenaded by Fleetwood Mac, A Flock of Seagulls, Elton John, INXS, and Bryan Adams.

I’ve asked taxi drivers all over the continent why they like 80’s pop music so much. Universally, the answer is “because it’s the best.”  Having spent my teenage years in the 1980s,  I’m OK with that.

Speaking of taxis, this trip was the first foreign country where I have used Uber for taxi rides.  Uber is a game changer for travelers in the developing world.  It virtually eliminates all of the common third world taxi scams.  I see tourists scammed more often in taxi rides than in any other situation.

If you use Uber, there’s less of a concern about getting a fake taxi or being picked up by a kidnapper.  All the inflated fares (gringo taxes) are eliminated.  You pay the same as a local and the money is automatically charged to your credit card.  That means that you don’t have to deal with the driver being unable to make change or thieves targeting you on the street as you remove your wallet to pay the driver.

I strongly recommend using Uber if the system is operable in the foreign city you are visiting.

While in the Lima, I didn’t encounter any problems.  Despite my lack of security drama, I did notice a couple things around the city on my midnight taxi ride through the ghettos to reach my hotel:

– Dogs on the roof are a big thing here. I saw a bunch of them. The lower income neighborhoods consist of single story cement block houses with flat sheet metal roofs. It seems that the owners put the dogs up on the roof at night to deter burglars.

None of the dogs looked feral. All looked well-fed and some had collars.

– People in Peru walk down the street staring at their smart phones just like people do in America. The difference is that at night, people walking with their phones in Lima hold them at center chest inside the front of their jackets or coats (it’s winter there).

The jacket keeps some of the glow from identifying a possible target for thieves looking to do a quick snatch and grab. The jacket also blocks easy access to the phone itself for anyone trying to steal it.  Not a bad security precaution.  I’d prefer that you walk without staring at your phone, but if you must use your smartphone, holding it inside your jacket protects it a little more than holding it in front of your face.

– I passed a national police substation. It was in an urban area and right off the public sidewalk. The door was propped open and there were no security procedures for entrance.

There was, however, a cop stationed at the door. That cop was wearing plate body armor and was carrying an old-school wood stock AK-47 (the first of such rifles I’ve seen in my three trips to Peru).

The cop with the AK wasn’t dozing or playing on his phone like American cops would be. He was actively scanning for threats. He was ready to go.

We’ve had several recent attacks on cops at police stations nationwide. I wonder if we’ll ever default to this type of security in the USA?

FOOD– Lima is known as the gastronomic capital of South America.  The food there is absolutely amazing.  During my trip, I was fortunate enough to get reservations at two of the city’s “Top 10” restaurants. 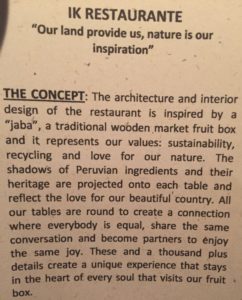 I had the seven-course “Taste of Peru” menu at IK Restaurante. It absolutely did not disappoint.  The meal started with mango scallop ceviche with quinoa.  The second course was smoked trout with Andean potatoes.  The meal continued with fish steamed in banana leaves with an Amazonian herb sauce, quinoa mushroom soup, and fish fried with a chestnut vinaigrette glaze covered with peach puree.  The main course was a beef dish with a sauce that was good, but tasted vaguely of gunpowder.  Desert was chilled passion fruit covered with a fruit garnished whipped cream. 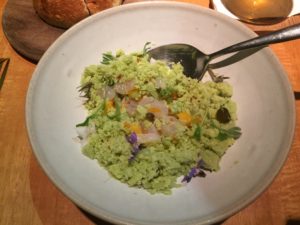 I highly recommend the IK Restaurante.  It exceeded my expectations.

After my jungle excursion, my new friends from the plant sanctuary and I went out to Restaurante Amaz.  We shared the family style meal there and I was equally impressed.  I was too busy talking, having fun, and stuffing my face to get any pictures of that meal.

Both restaurants were top-notch.

Guns– As is typical when I walk around big cities in the developing world,  I always check out all the cops’ and security guards’ guns. As per my 2015 trip, all the security guards carried .38 revolvers. Mostly they were made by either Taurus or Smith and Wesson.

I saw one that looked a little different. I thought it might be a Ruger LCR. I had never before seen a Ruger revolver in South America.

As I got closer to the guard, I realized it wasn’t a Ruger.  Instead it was the relatively rarely-seen Arminius Titan Tiger. I haven’t seen one of those for at least 30 years. They didn’t work when they were new. I can’t imagine how well they do after riding in a holster for more than four decades.

I checked that particular guard off of my “who will you jack to get a firearm in an emergency“ list. 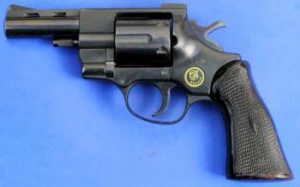 Security and Mindset– A lot of folks freak out when I leave the country. Before every vacation I get the inevitable half dozen emails asking how I could possibly feel “safe” without carrying a gun. Considering that I don’t take out my trash without wearing a gun at home, I guess it’s a fair question.

The gun doesn’t make you safe. Your actions, cultural understanding, awareness, and demeanor are what make you safe. The gun is just a tool in the event you have a failure in one of the above-listed attributes or skills. The gun isn’t the cause of your safety, it is merely a backup plan in case you screw up.

There are other backup plans. Here’s my load out for walking the mean streets of Lima, Peru last week. A blade (Spyderco Salt), pepper spray, and a face-smashing flashlight (Fenix PD35) are pretty good backup plans too. 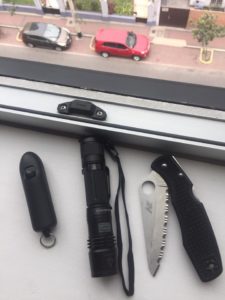 I went to some sketchy places in Lima. I didn’t feel unsafe because I had the attitude and knowledge to truly BE safe. The lack of a gun as a backup plan doesn’t alter that fact.  I’d urge all of you to reconsider only vacationing in places where you can take your gun.  There are a lot of amazing things to see in this world and some of them are locations where you can’t pack your pistol.  Go anyway.

The challenge of exploring an entirely different culture without the weapons you normally carry is a skill building exercise of immeasurable importance.  You will learn to read people and analyze your environment in an entirely different way if you are forced to be relatively unarmed.  I’ve learned way more about avoiding, evading, and deterring criminals in my foreign travels than I have in 22 years of police work.

The jungle was an entirely different challenge.  No humans to worry about.  The challenge there was dealing with an unforgiving environment.  Everything is trying to kill you in the jungle.  Things change when you spend all of your time outside in the bush where the temperature is 90+ degrees with 100% humidity. 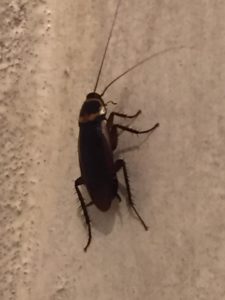 The biggest cockroach I had in my hut last week. This little guy was about as long as my thumb. Welcome to the jungle.

On one of my first trips to the Amazon, my jungle guide made a profound statement that I have remembered for more than a decade.  He said:

“People call this place the “Amazon Rain Forest.”  They call in “the lungs of Mother Earth” and all kinds of other stupid shit too.  You can call it whatever you want, but when you are inside of it, all the fancy names go away.  You are in the fucking jungle.  If you aren’t careful, you’ll die.”

Luckily I survived relatively unscathed.  I got several piranha nips while swimming in a nearby river.  I also got two nasty bee stings. Fortunately it takes more than that to finish me off.   Even though being in the jungle is challenging, I would not trade the experience for anything. 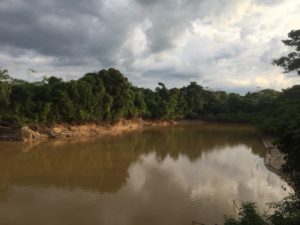 You would swim in this piranha-infested river just like I did if you were dripping in sweat and battling the jungle’s 95 degree heat.

As almost every major mass killing or terrorist attack seems to occur when I’m traveling outside the country, you should feel safer now that I’m home.  Your chance of being involved in a terrorist bombing or active shooter incident has decreased by approximately 3000%.

You all can stand down, take off the plate armor, and stop rolling heavy to the grocery store.

Keep your shit handy though. I’m leaving the country again in less than a month. 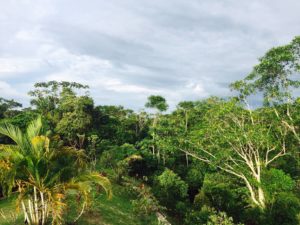 The Amazon Jungle where I stayed for a week