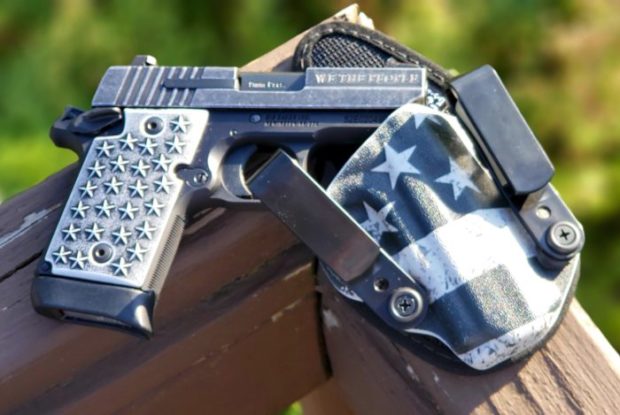 This installment takes a look at carrying a Sig Sauer P938 in a StealthGearUSA Holster. 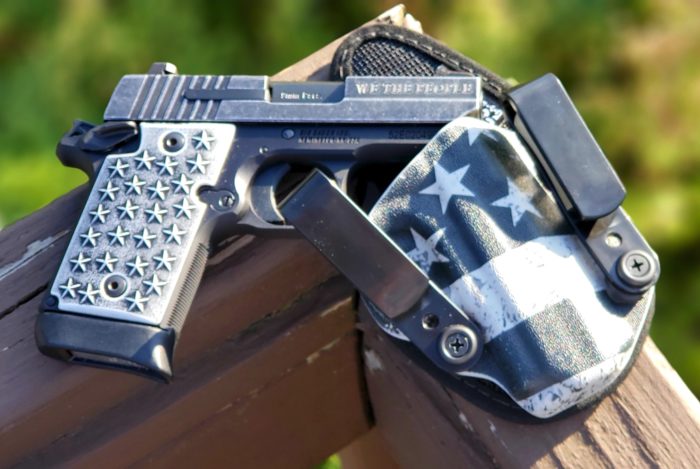 Let’s start with the gun.  I don’t have a massive amount of experience shooting the 938, but I’ve seen quite a few in the classes I teach.  The guns generally tend to run pretty well.  They seem to be reliable and accurate.  My students’ biggest complaint about this gun is about the manual safety.  Its location just simply isn’t ergonomic for a lot of the folks who are shooting the gun.

On some of the guns I’ve seen, the safety was also very stiff.  I’ve had several students who were unable to operate the safety using their strong side thumb.  If you need two hands to remove or activate your gun’s manual safety, you’ve chosen the wrong defensive carry gun.

While I think most people looking for a gun of this size would be better served with a Shield, G43, Sig 365, or Kahr, I’m OK with the 938 if you are die hard 1911 fan.  If you carry this one, train to the point where your use of the safety is reflexive.   I occasionally see students (who mostly shoot striker fire pistols) forget to take the safety off during presentation.

I’m guessing that most of the folks carrying these guns don’t spend a lot of time shooting them.  If you choose to pack this model, you’ll need significant dry or live fire practice to make the safety use an unconsciously competent skill set.

I noticed that Ian isn’t carrying a spare magazine.  I think that’s a mistake in this case.  With a total capacity of eight rounds, you have essentially what my friend Tom Givens calls a “two bad guy gun.”  If you are moderately skilled, you should have enough rounds to successfully stop two criminals attacking you.

When you factor in stress, misses, and the need to shoot a high percentage of attackers with more than one round, I’d feel a lot more comfortable if I was carrying a spare magazine.  Eight total rounds (assuming he’s not carrying chamber empty) is a little bit light for my preferences.  It won’t be a good day when your “two bad guy” gun is needed for a “three bad guy” situation

Let’s take a look at the holster.  The StealthGear holster pictured above is an example of a “hybrid” IWB holster. Hybrid holsters consist of a leather or nylon backer closest to the body and a polymer holster body on the outside. The soft backer against your body makes for comfortable carry, but I don’t see my students having long term success with any model of hybrid holster, regardless of manufacturer.

What tends to happen over time is that the soft backing material loses its stiffness. That makes the holster less rigid and interferes with reholstering. You will see students with floppy-backed hybrid holsters using the gun muzzle to push the leather or nylon sweat shield away from the body of the holster when reholstering. They almost always point the muzzle directly at their side when doing so.  It’s a recipe for disaster.

Hybrid holsters are popular and I’m sure I’ll get some heat for saying so, but they all suck. They are dangerous and should be avoided.

My friends at the Integrated Skills Group recently noted yet another weakness of the hybrid holster in their excellent article Bad Practice: Bad Holsters.  From that article:

Kydex mated to leather (the hybrid holster) is another issue. Guys swear by hybrid holsters as the most comfortable things around and that’s fine… until it’s not. The problem is that they’re flimsy material attached to rigid material by way of screws. Why is that a problem? Well, if someone realizes you’re carrying and makes a grab for your hybrid holster, they simply don’t hold up.

In a hybrid holster, that gun is basically a pry-bar between a rigid material and a soft material. It doesn’t help that most of these are meant to be carried “strong side” (3-4 o’clock) where they’re braced against the iliac crest of the hip bone which provides a solid point to leverage the gun against while trying to snatch it.

Getting away from the physics and anatomy, Craig Douglas of Shivworks, arguably the foremost authority on contact range, interdisciplinary fighting, stated he has ‘never had a hybrid holster survive ECQC’.

The final issue is the patriotic stars on the grip panels, the “We The People” engraving on the slide and the American flag on the holster.

Who could turn patriotism, the US Constitution, and an American flag into something bad?  Have you considered that you might have to shoot an illegal immigrant?  The narrative the prosecutor will make to the jury is that you are some type of racist, nationalistic, bigot who shot the “victim” for merely being born someplace other than the United States.  It’s an argument you don’t want to have.

Will logos like this automatically become an issue?  No, not always.  But why take the chance?  It’s best not to give the other side any ammunition to use against you.  Keep the logos (even the patriotic ones) off your defensive guns and holsters.